Yes…..I’m finally going to get started posting photos and stories about my trip to Colorado and New Mexico – which I completed the last week in September and first week in October! Better late than never, right?

Colorado and New Mexico were the last two states I had to visit to meet my goal of seeing all 50 states. I decided to do them together in one trip – they border each other and it is a long flight to get out there – might as well make it one good trip! So, I flew into Colorado City, first……I spent five absolutely amazing full days in that area (and two partial days) – Sept 24th – 30th! WOW! I loved it every bit of it! My hotel was in a perfect location — just minutes from Garden of the Gods, Old Colorado City, Cheyenne Mountain Zoo, Manitou Springs, and more!

I’ll start with Old Colorado City……formerly known as just Colorado City, it used to be one of the first towns founded during the Pike’s Peak Gold Rush of 1859 and was briefly the capital of the Colorado Territory. It is now a historic neighborhood in Colorado Springs. Known for coal and gold mining in it’s heyday, it is now on the National Registry of Historic Places and a very quaint little commercial district with lovely shops and fabulous restaurants – I had several of my meals there, as it was close and had so many options. I also attended Sunday morning church services there at the Pike’s Peak United Methodist Church.

The residents of Old Colorado City embrace and preserve their “Cowboy Town” appeal with signs, murals, and store front appearance. 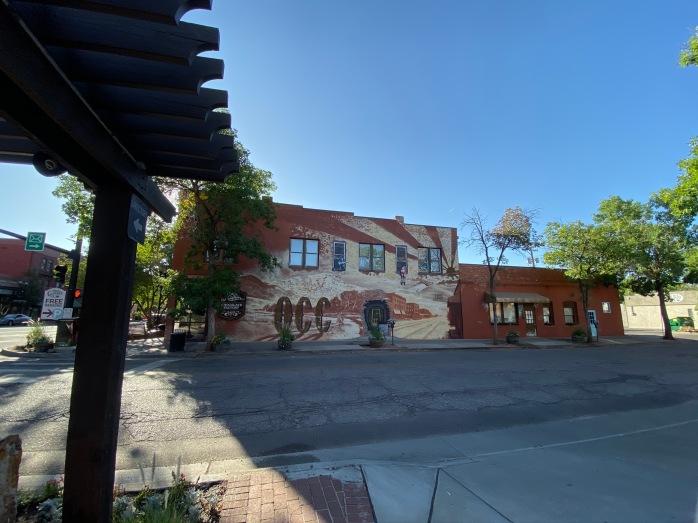 This is a full view of the famous mural…..close ups follow.

Representative of the wild west……hehehe!

The streets are very welcoming……

This was not the church I attended, but it was so lovely! 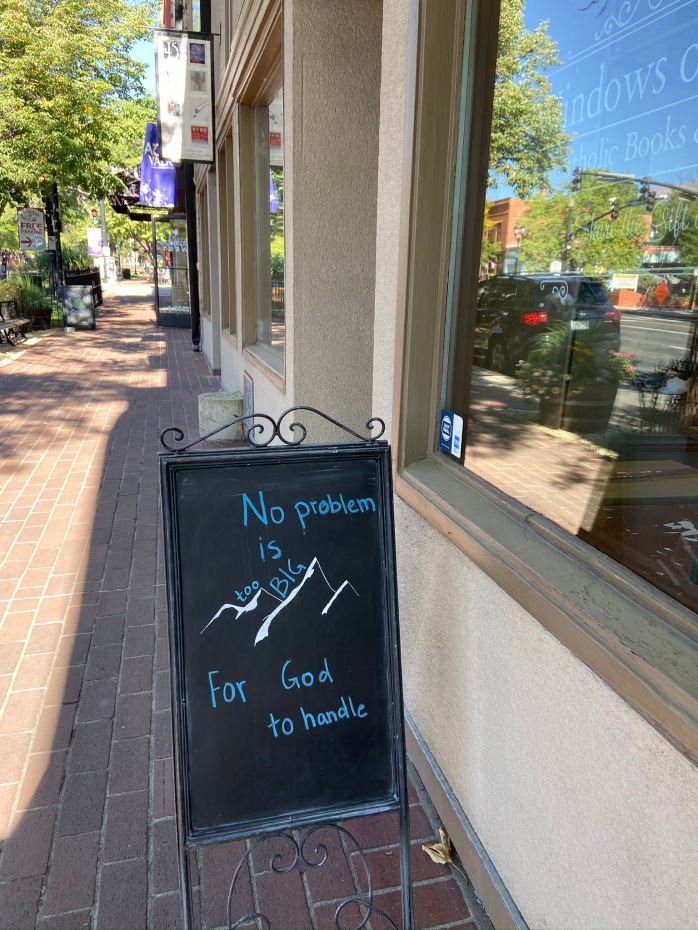 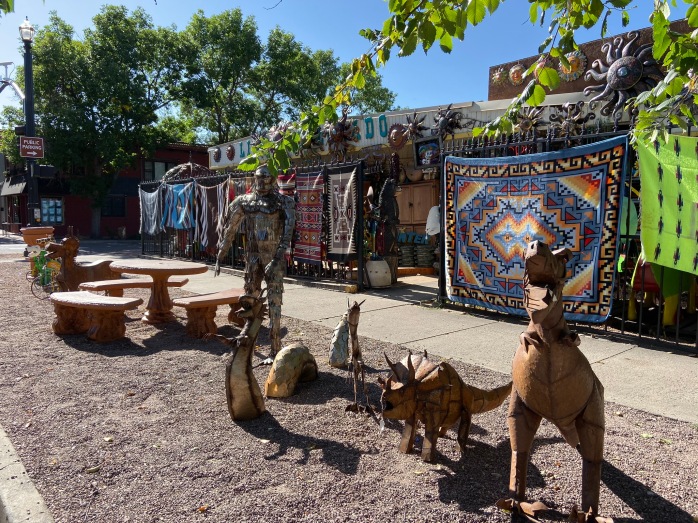 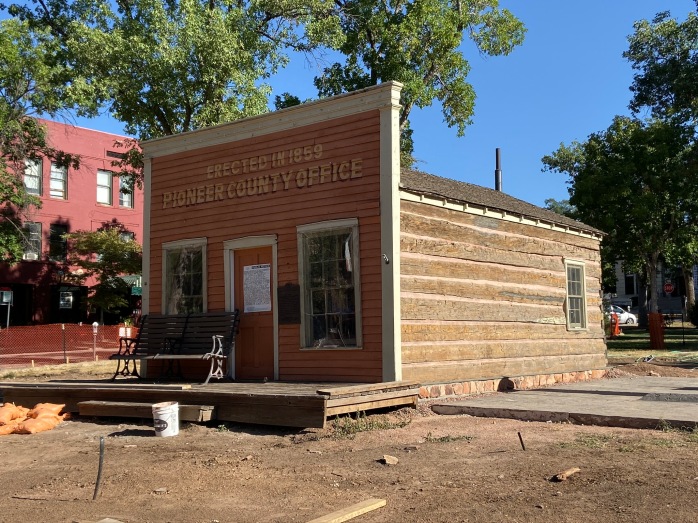 This is an original building – the former El Paso Couty Courthouse

As I said, I had several meals in Old Colorado City and had many opportunities to wander around the historic district. I loved it there and made sure I had time to enjoy it whenever I went out to eat!

I had breakfast here twice – they had outdoor seating and really good food!

The second time I was there, I overheard some other guests mention the “amazing” cinnamon rolls……so, of course, I asked about it! The waitress asked if I wanted it to eat in or take out…..I said eat in and she suggested I eat some here and take the rest with me……I soon found out why – it was HUGE!!! The size of a cake big enough to feed a small country! I ate a few bites and did take the rest with me……unfortunately, it didn’t live up to the hype and I never finished it! But, I can now say I’ve had the World’s Largest Cinnamon Roll!!! hahaha

Even the squirrels were friendly! 🙂

I had dinner one night at Dat’s Italian…….lovely family owned restaurant and delicious spaghetti! 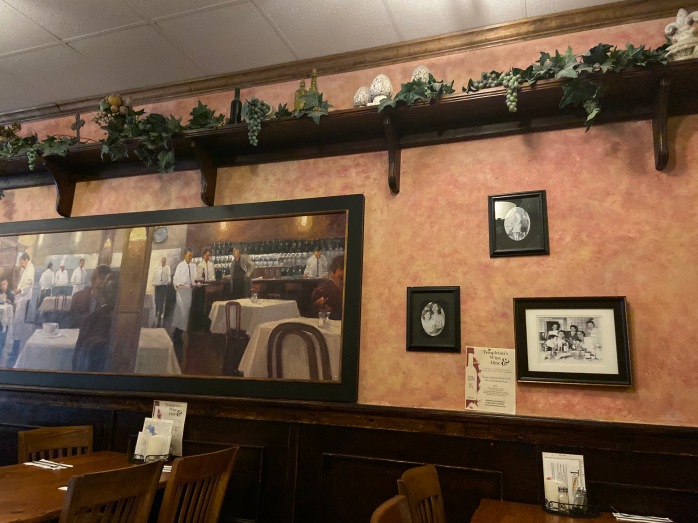 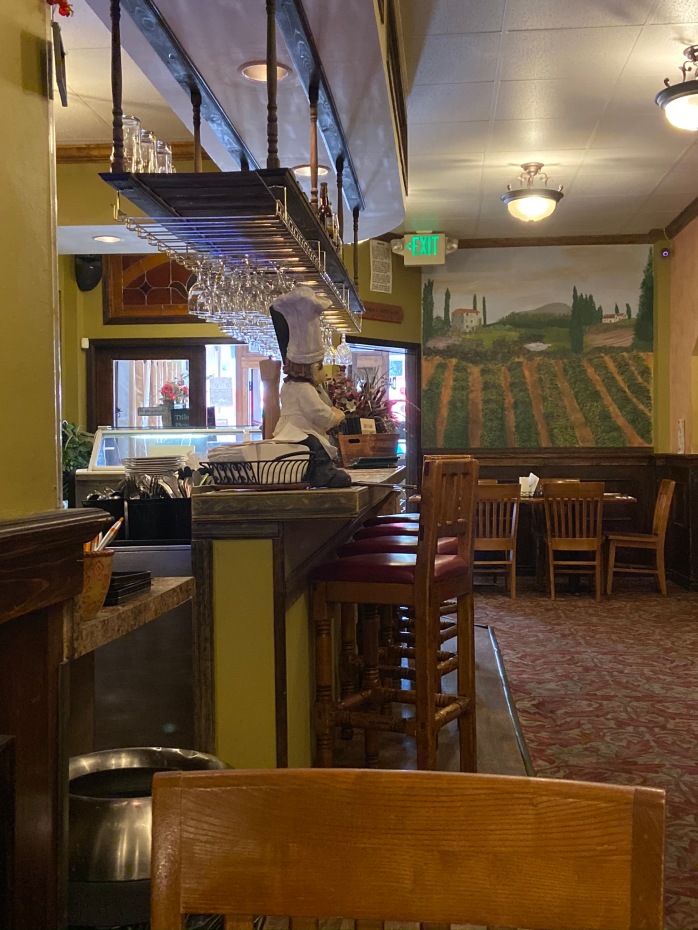 I didn’t realize they automatically put cheese on……luckily, I was able to scrap it to the side and still enjoy the meal! 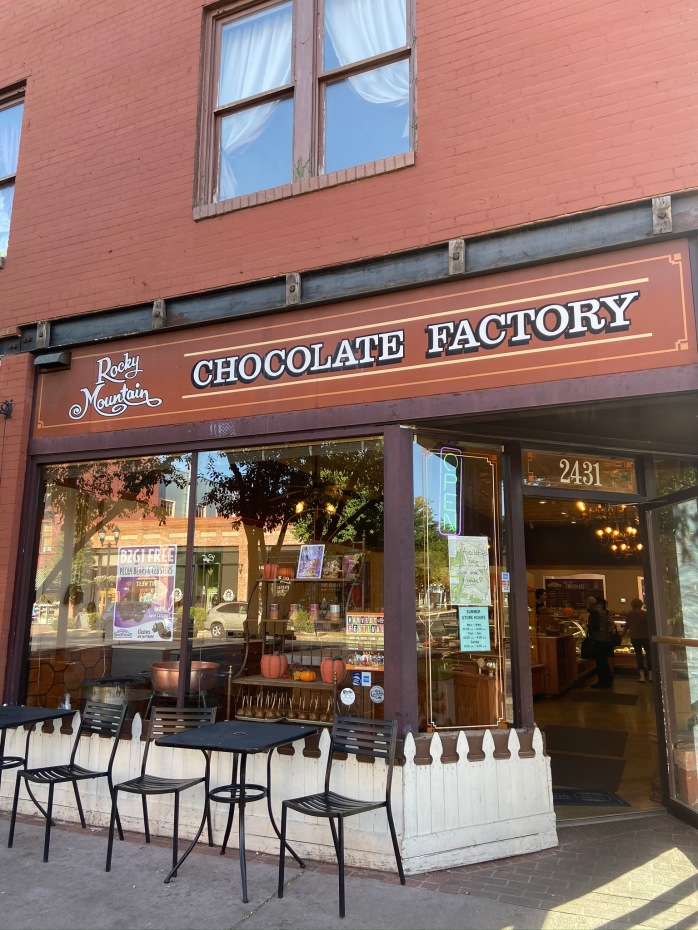 While wandering around after dinner, I found the original Rocky Mountain Chocolate Factory…..who could resist that? I stopped in and almost went into a sugar coma just looking at the displays! I got a chocolate covered apple to take back to the hotel and some homemade dog biscuits to bring back for Megan! (Full disclosure – I went back another evening for another one of those apples) 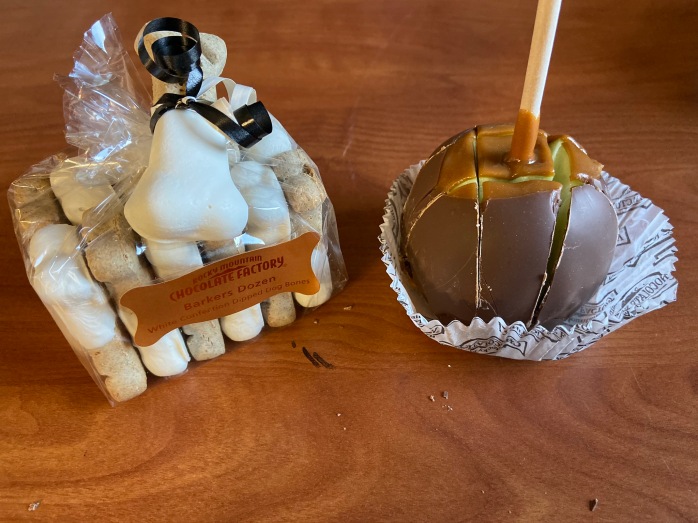 Another evening, I chose Mother Muffs for dinner……another perfect choice! 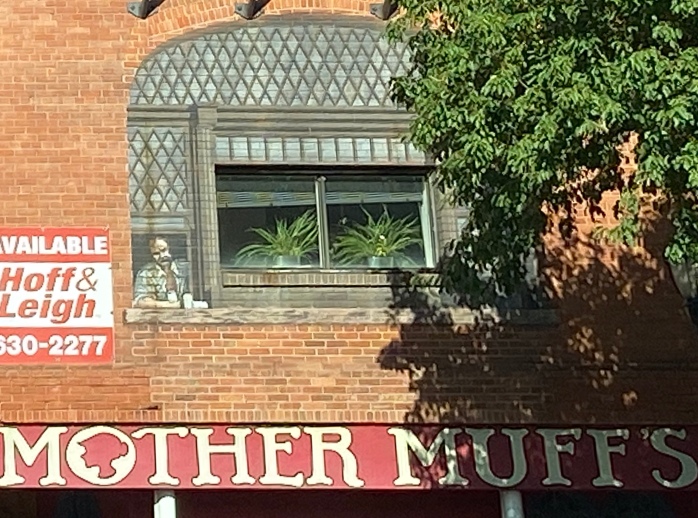 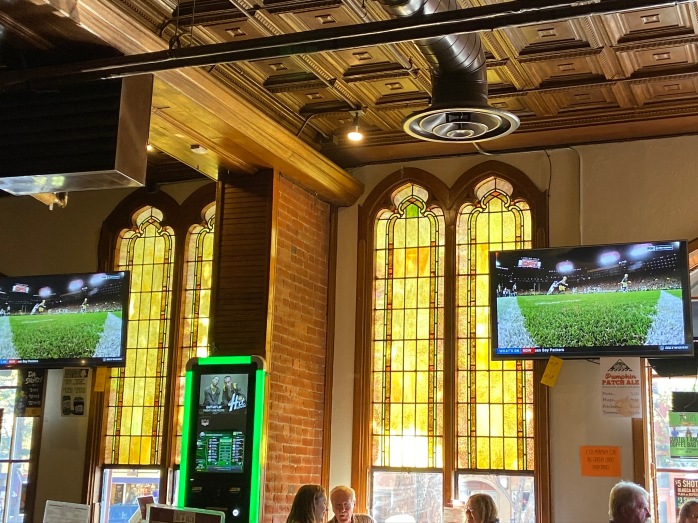 I also had two meals at The Mason Jar……both amazing! 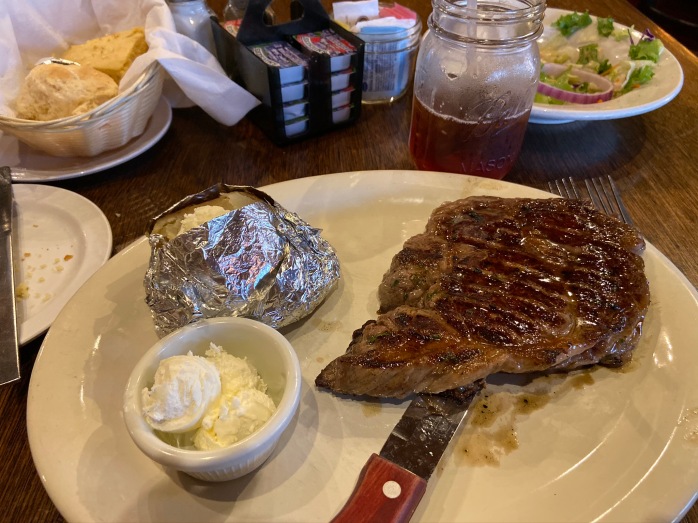 Ribeye, salad, baked potato, and sweet tea…….perfect sweet tea…….between the two meals, I must have gone through a gallon or more of refills! LOL 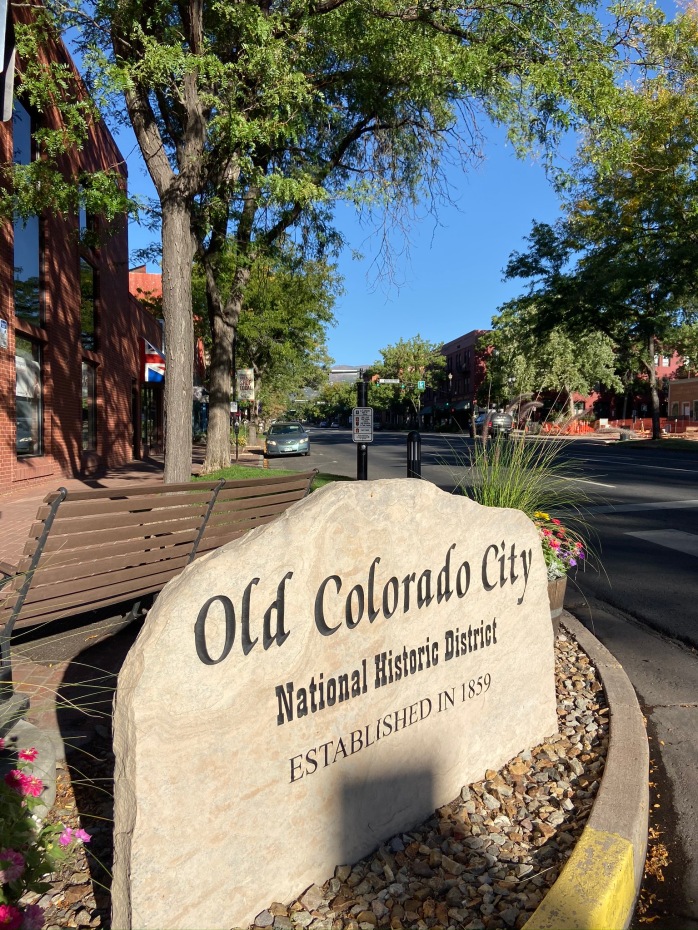