While in Colorado, I booked two cowboy-led jeep tours provided by a company called Adventures Out West…..they were expensive, but amazing – I highly recommend spending the $$$! The tours are in open 4×4 jeeps with awesome guides and small groups, so lots of opportunity for questions, fun, and specialized photos. Also – a lot of the time, we were on roads that you REALLY need an experienced driver and a 4-wheel drive vehicle – trust me!!! Since I was a single, on both tours I got to ride in the front seat, so got great views and experiences!

The first tour covered the foothills – .in addition to Garden of the Gods, which I posted about separately, we drove all along a very narrow dirt road with no shoulder – very scary – and lots of curves, switch backs, and tunnels….the road used to be the Short Line Railroad tracks that wound along the side of the mountain! We also drove thru North Cheyenne Canyon, Helen Hunt Falls (not the actress Helen Hunt – it was named after a local writer), and more…..definitely glad I chose this tour – the weather was perfect and the tour by Adventures Out West was fabulous!!! Here’s just a few of the photos!

This was our jeep — there were five of us on this tour – me and two couples that were traveling together from Tennessee ! 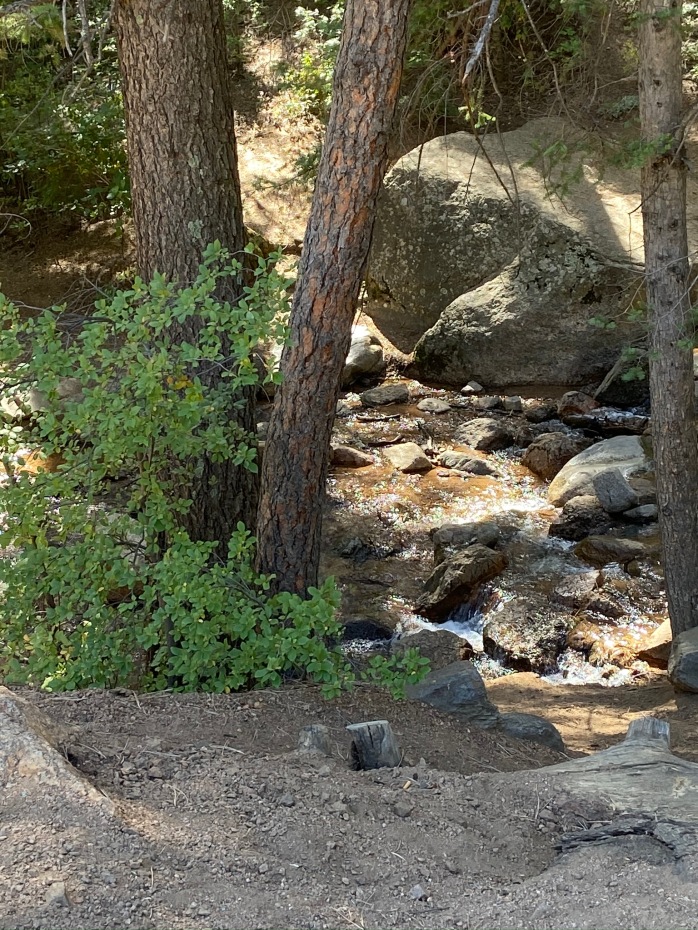 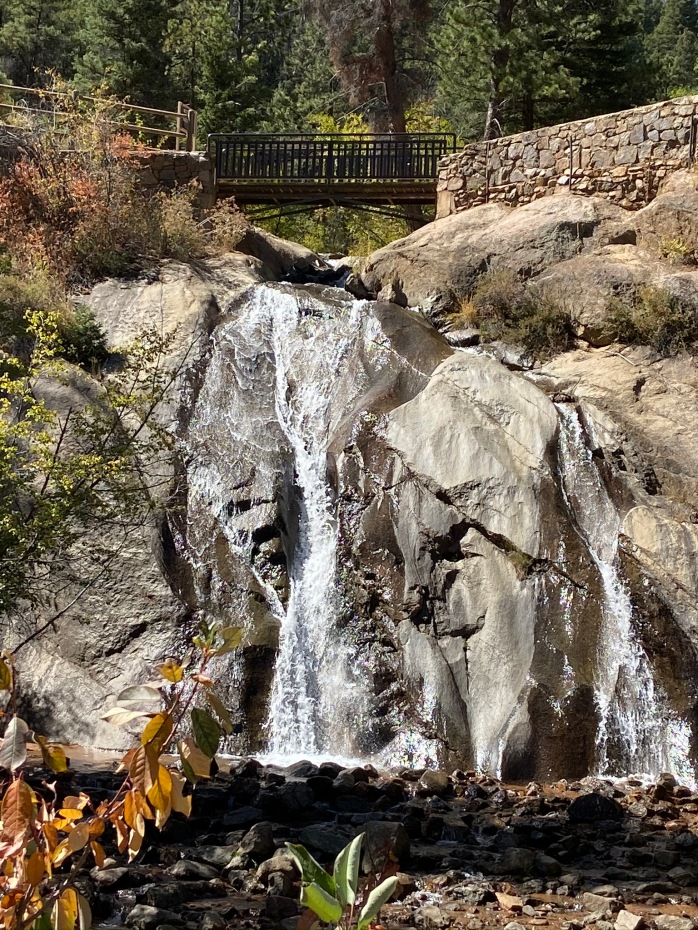 This is our tour guide – Prairie Dog! He was awesome! He took my photo for me with my phone and then turned the camera for a selfie! LOL 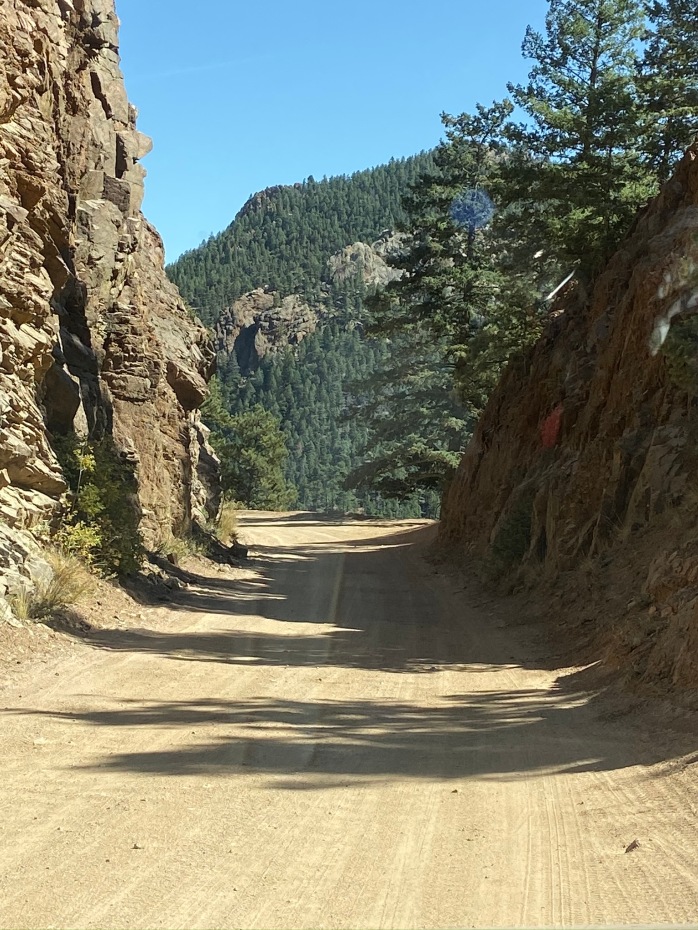 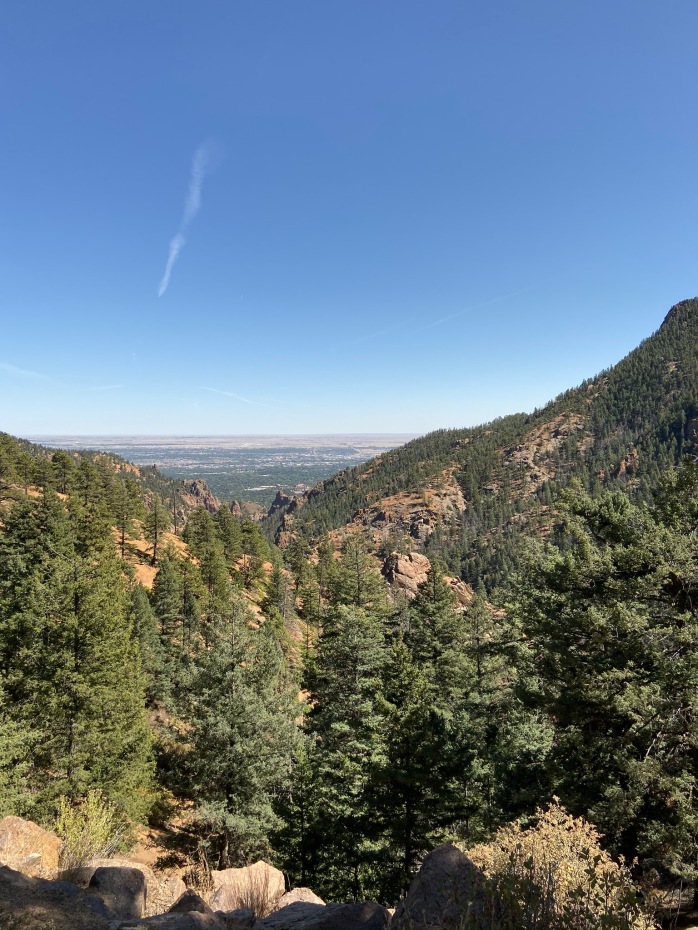 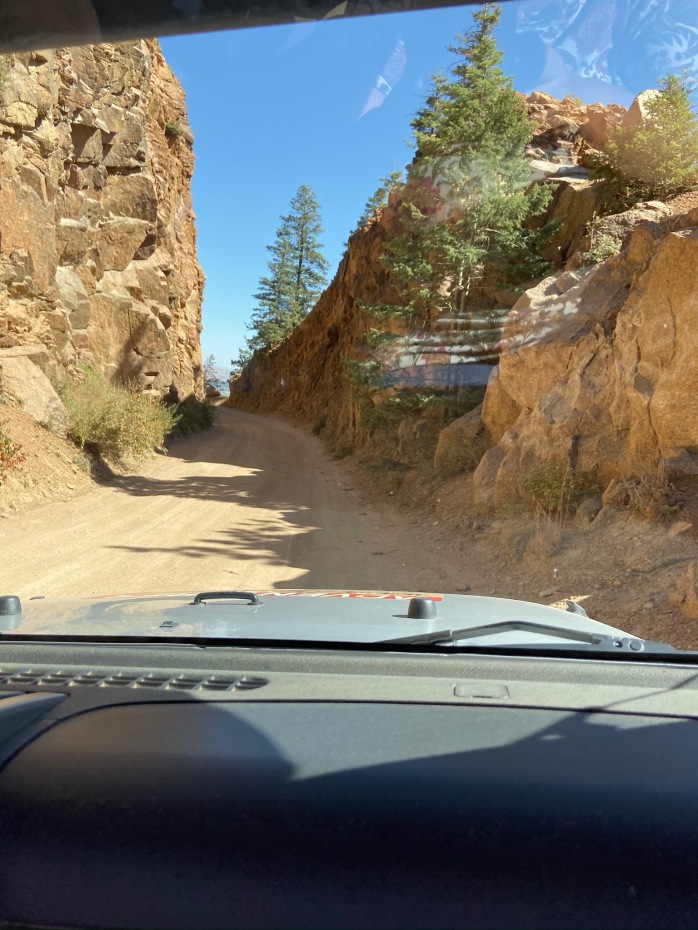 Look down the to the center of the photo – that’s the road we came up on…….shows how far up we traveled – and this was just the foothills! The high country was covered in the next tour! 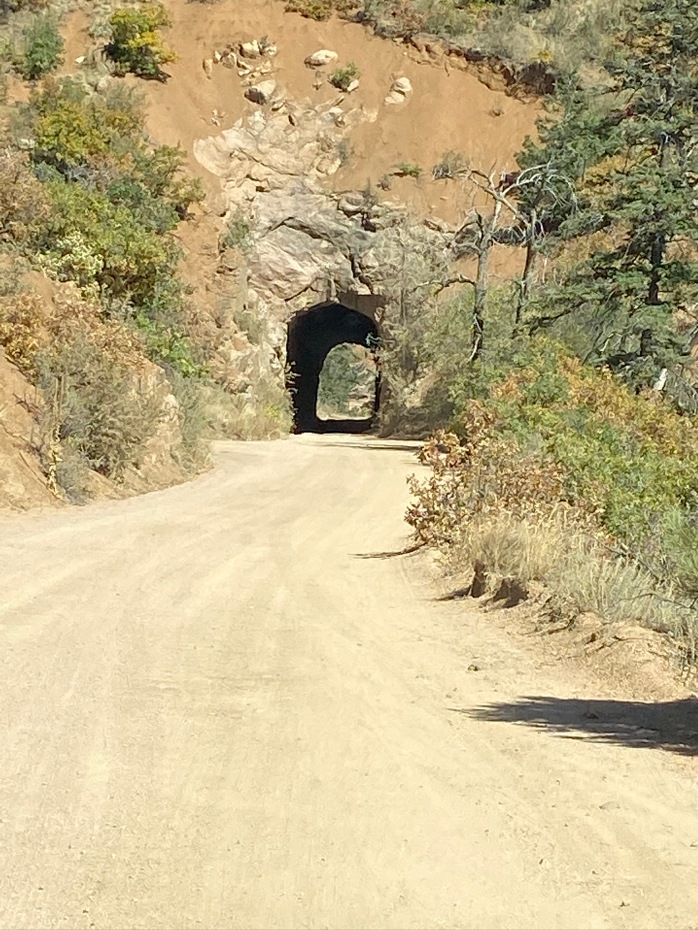 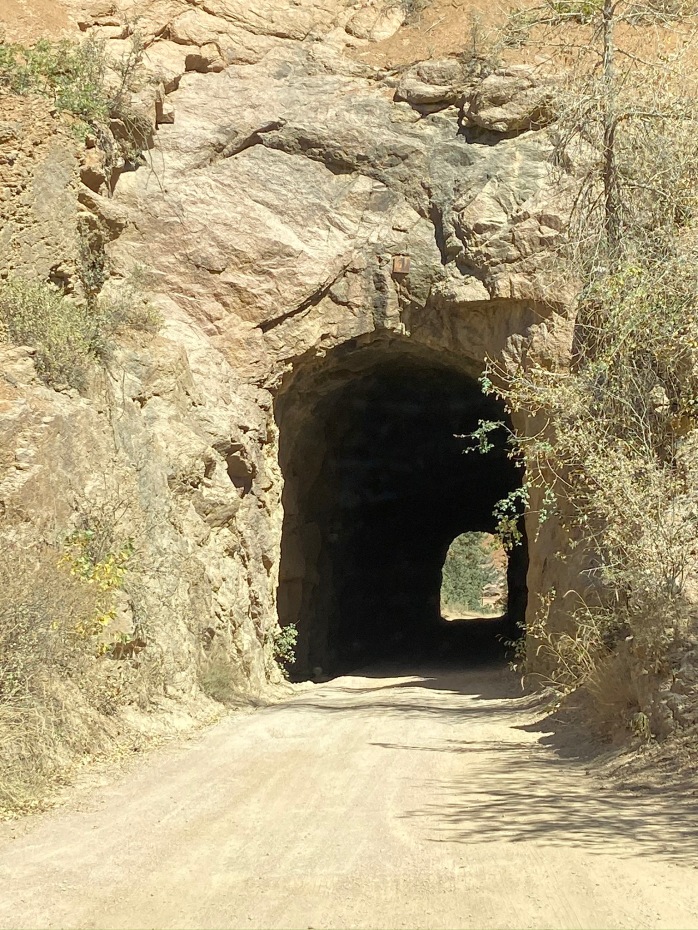 These tunnels were created for the Short Line Railroad when it was first established in the old west! 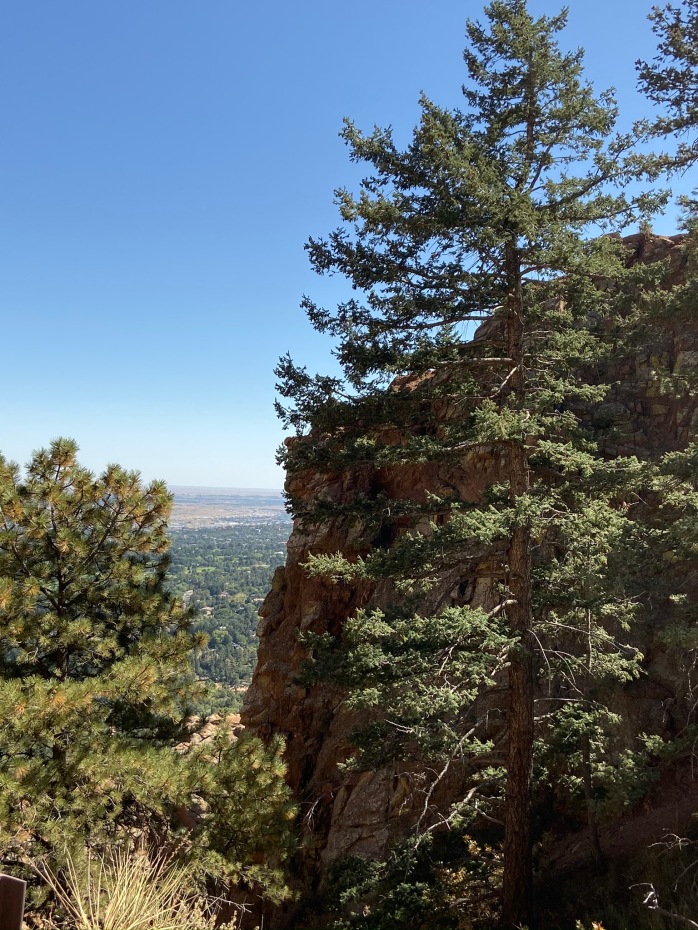 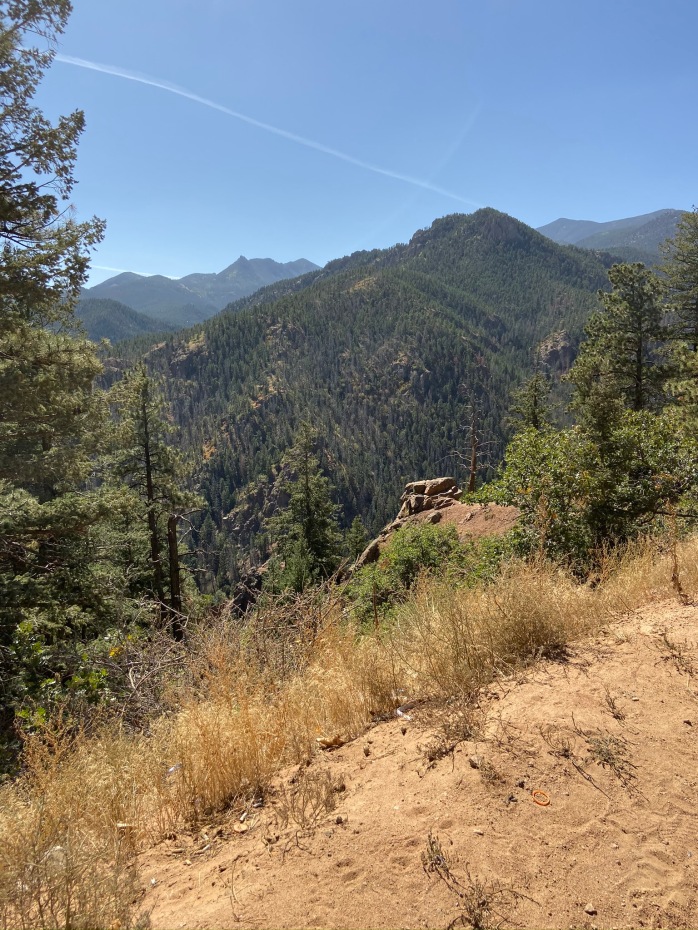 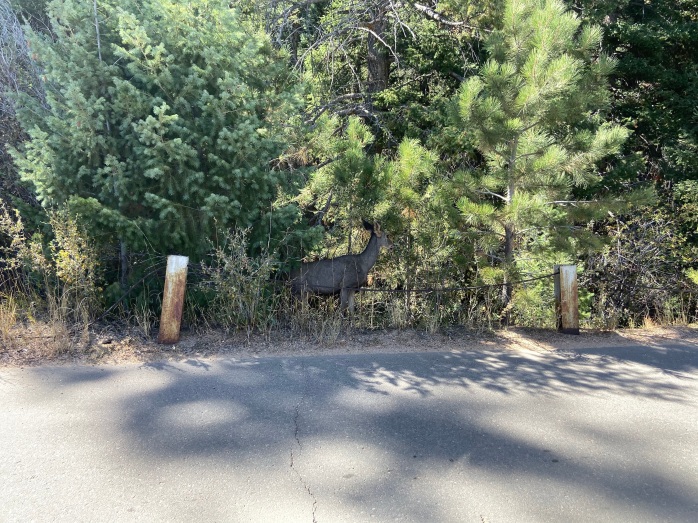 The second tour I took with Adventures Out West was the next day and covered the High country! When I booked it, I misread the description – I thought it included going up to Pike’s Peak – my bad – it said Pike’s Peak Region – the tour actually went up Cheyenne Mountain through Pike’s Peak National Forest! So a bit different than I thought, but still awesome!!! We got up Cheyenne Mountain and our guide – a girl named Rambler – pulled off the road, put the Jeep in 4-wheel drive and headed off road…..we traveled down narrow, rough, twisting roads in a steep grade upward! For quite a way, we were following a stage coach route – man, that was not a road I’d want to be on in a stage coach – can we say rough and wash-board run, boys and girls???!!! Then we were on the Short Line Railroad bed – same one we were on yesterday but much higher……then, after a while on that route, she said – now we’re REALLY going off road — we turned onto an old logging road that took off roading to a whole new level!!! We navigated over large ruts, boulders, creeks, and more – even that high clearance Jeep kept scraping bottom……till we reached 10,500 feet elevation where we stopped for a break and then headed back down!!! I think I vibrated and jostled away a good part of me, but it was so much fun!!! And the views were incredible!!! It wasn’t at all scary – just a total blast!!!

We took a different jeep on this one…..but same set up and also just five of us (me and two couples that didn’t know each other) and I got to sit up front, again! 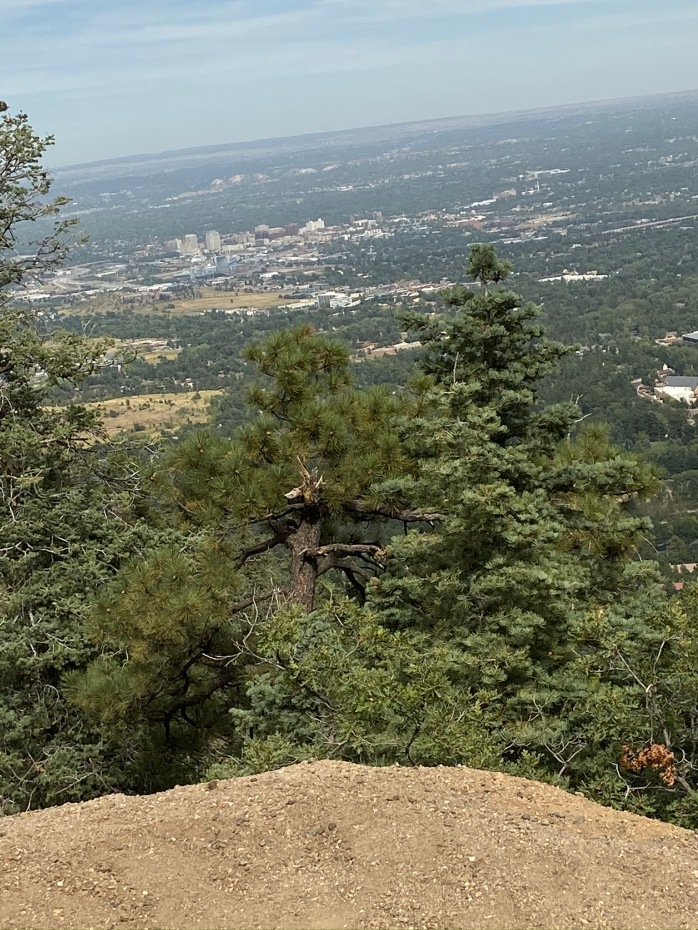 Actual guard rails were few and far between…..there is a slight ridge along the side of the road that they call “Colorado Guard Rails”! 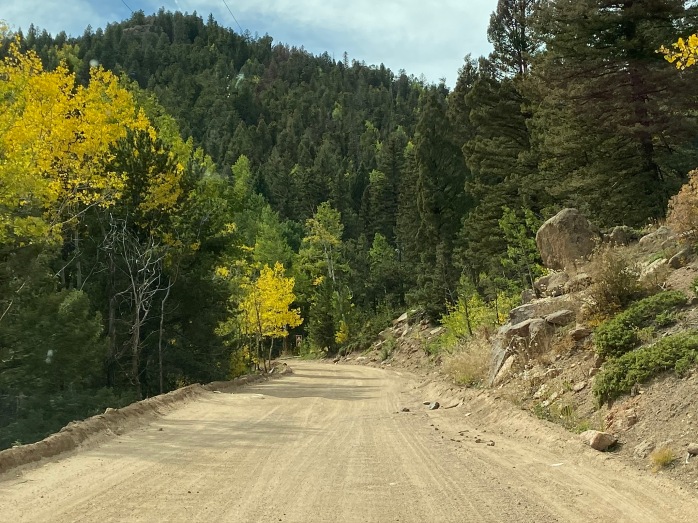 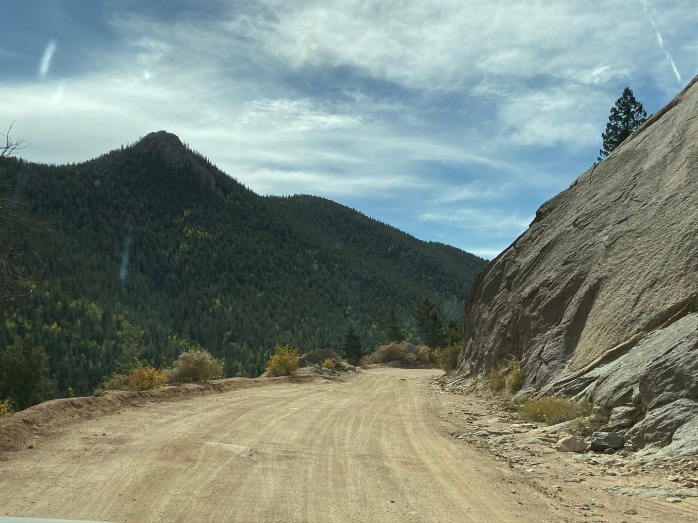 See that ridge along the left side of the road? That’s the Colorado Guard Rail and all that is between you and the steep cliff…..and a sharp curve that prevents you from seeing what’s coming from the other direction! 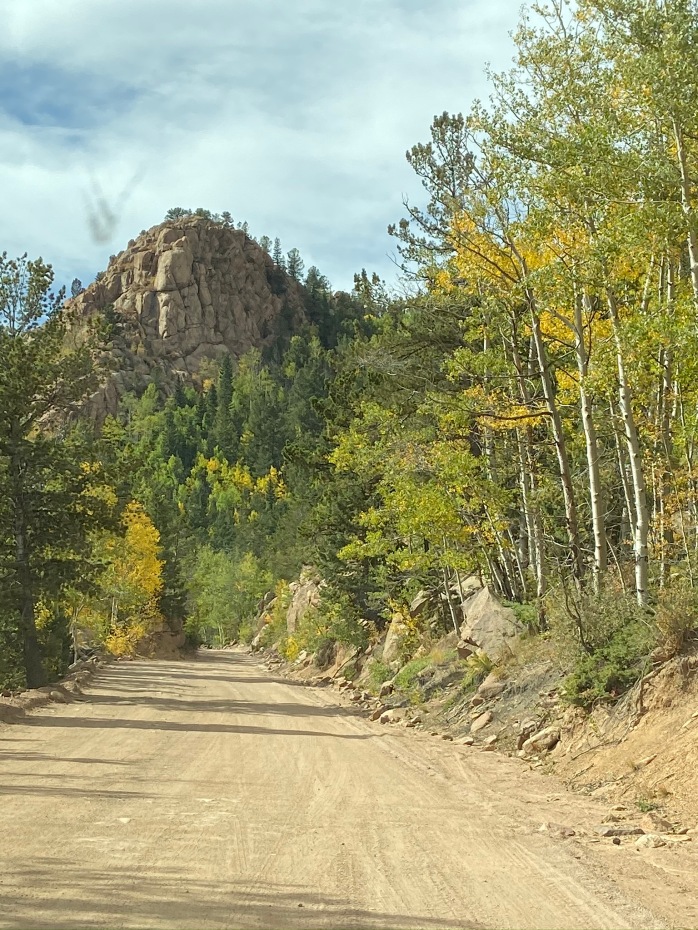 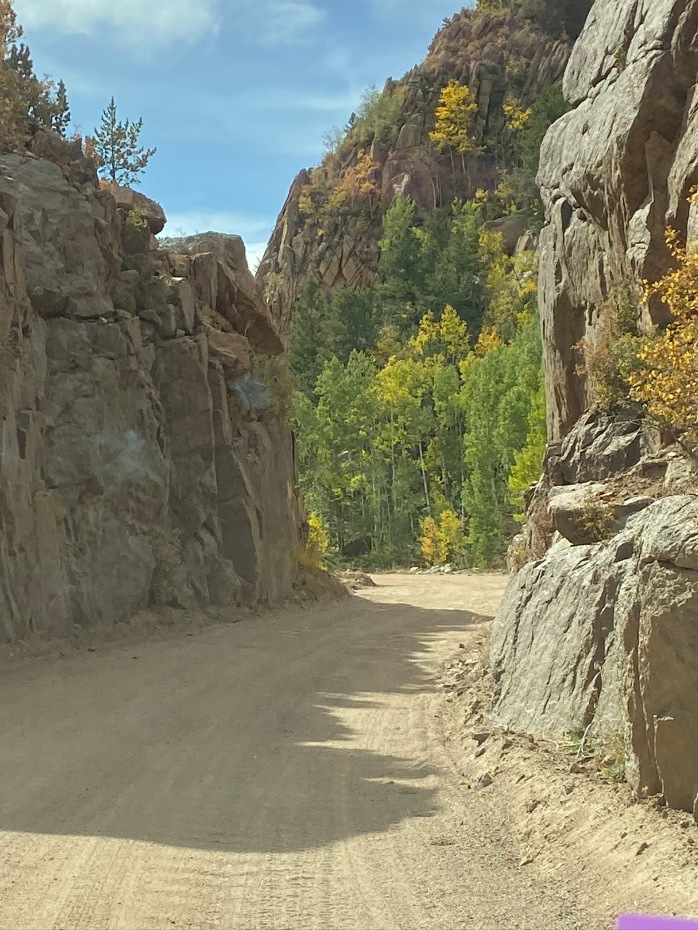 These roads are a LOT rougher than they look!!! And, the jeep was bobbing and pitching too much to get decent photos of the boulders and huge ruts we maneuvered over in a lot of places along the way! 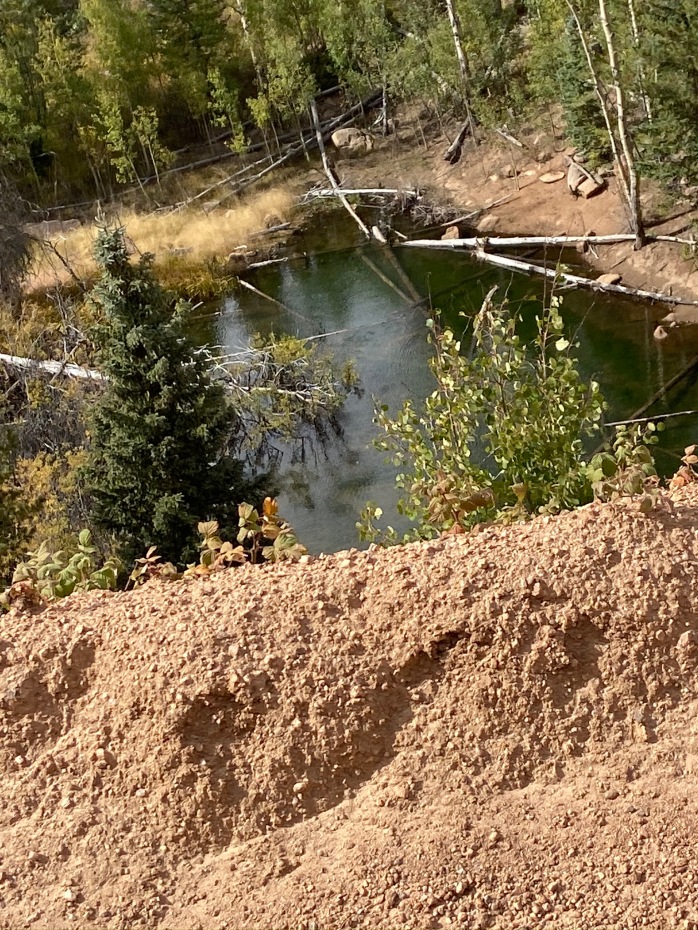 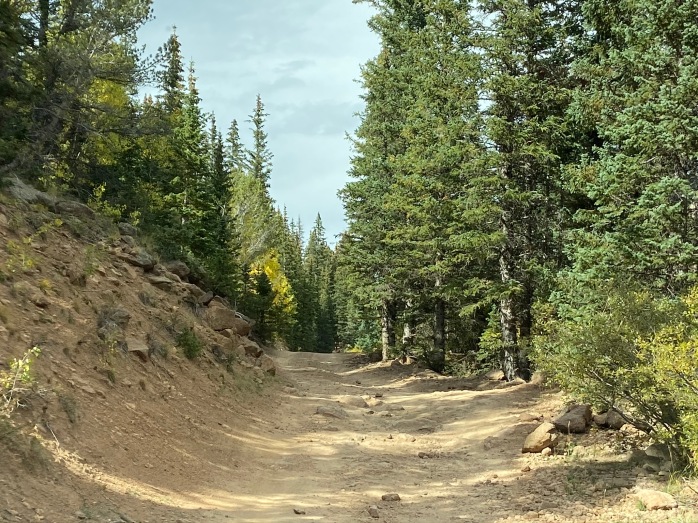 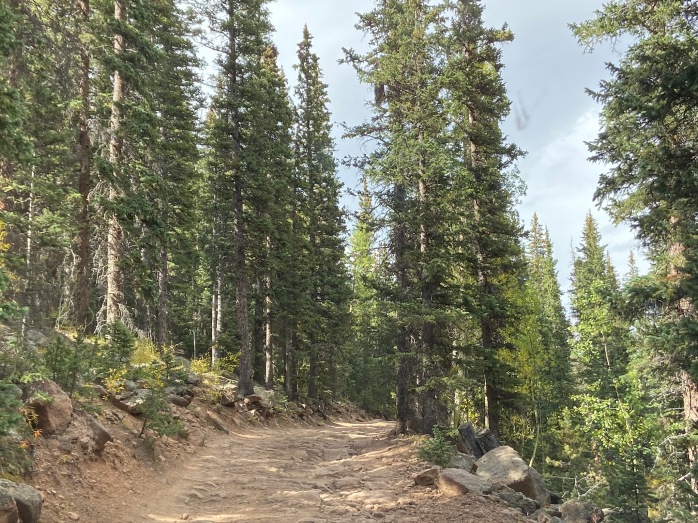 No way you’d ever make it on these roads without 4-wheel drive and super high clearance! 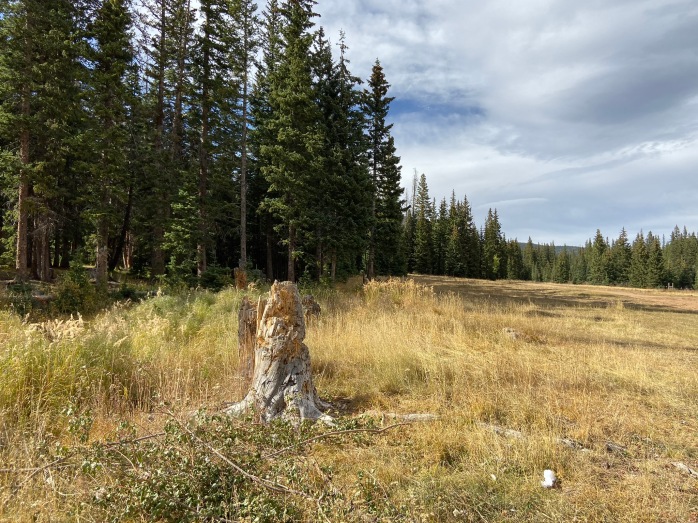 The top…….10,500 feet elevation! We took a break here and got out to stretch our legs and stop the vibration in our bones! LOL 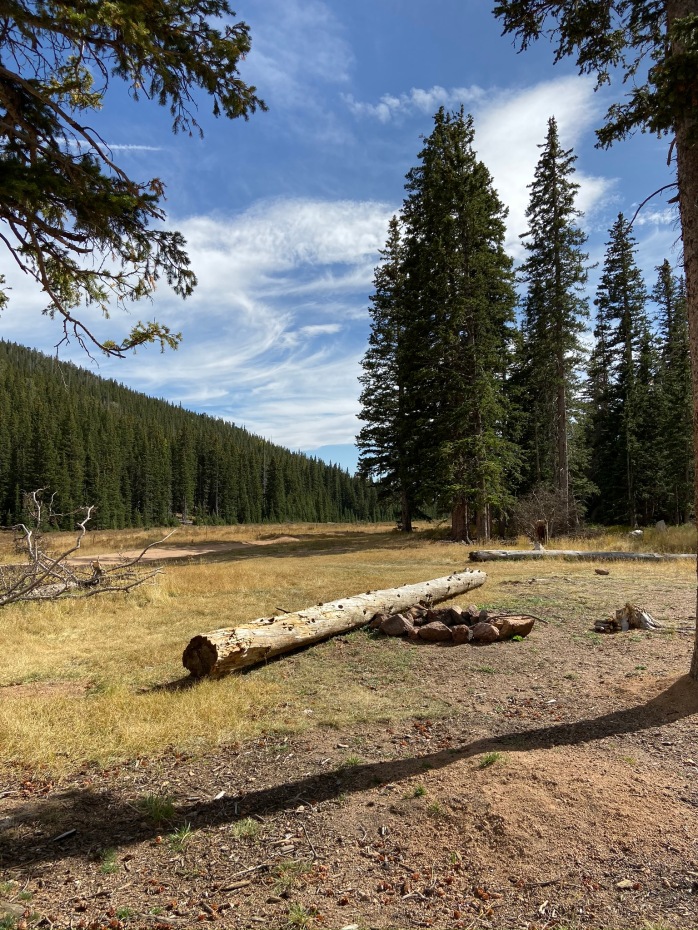 Someone had been up there target shooting…..and left their target!!! Poor ole bear! 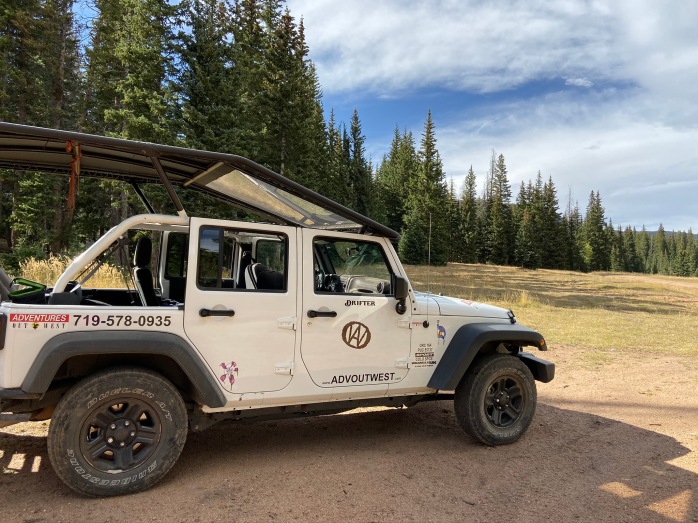 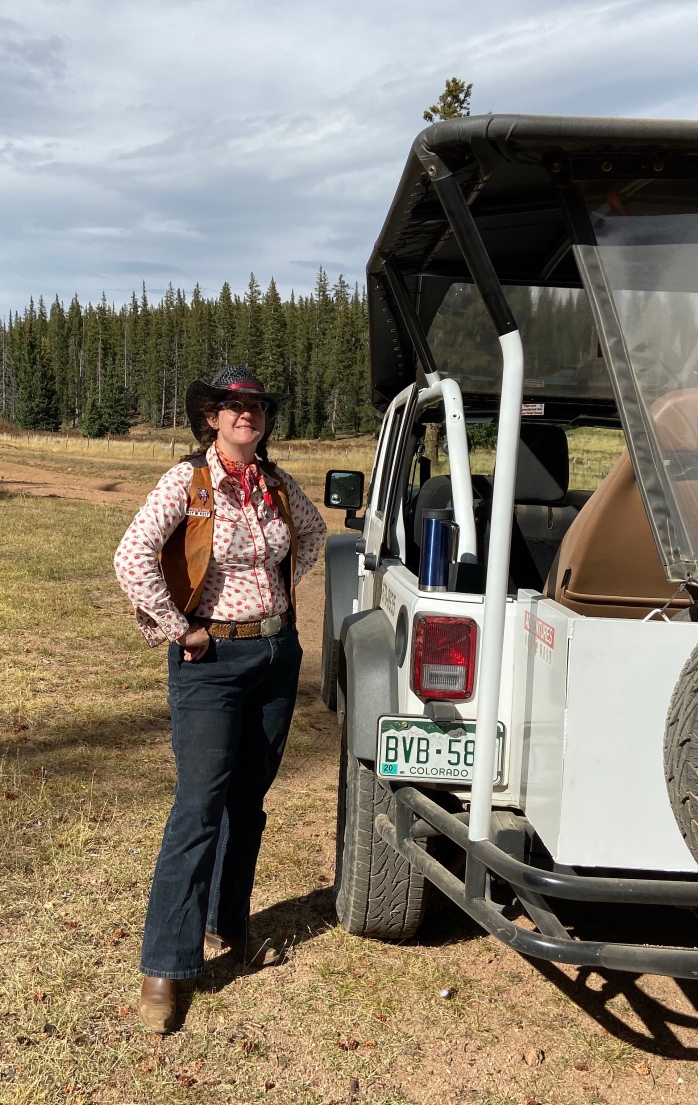 This is Rambler – our tour guide. She was pretty amazing, too! 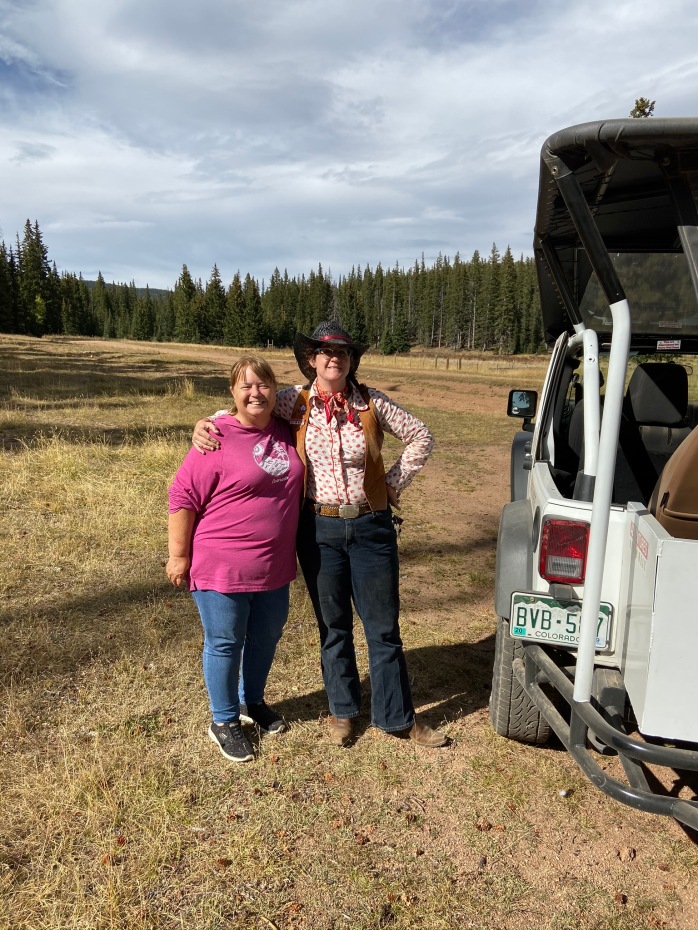 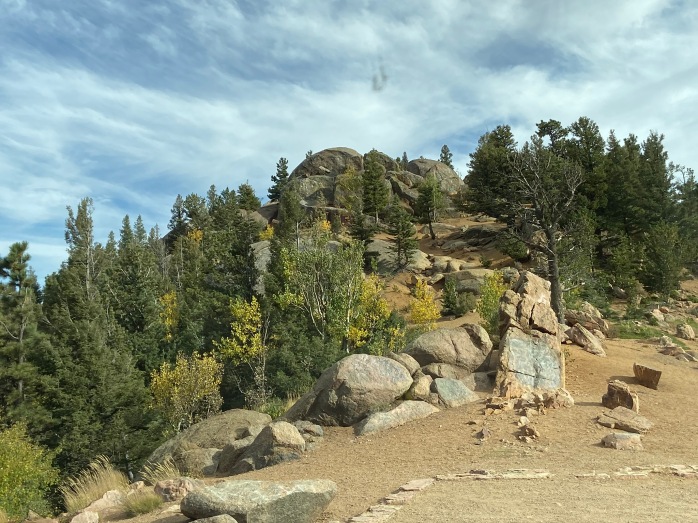 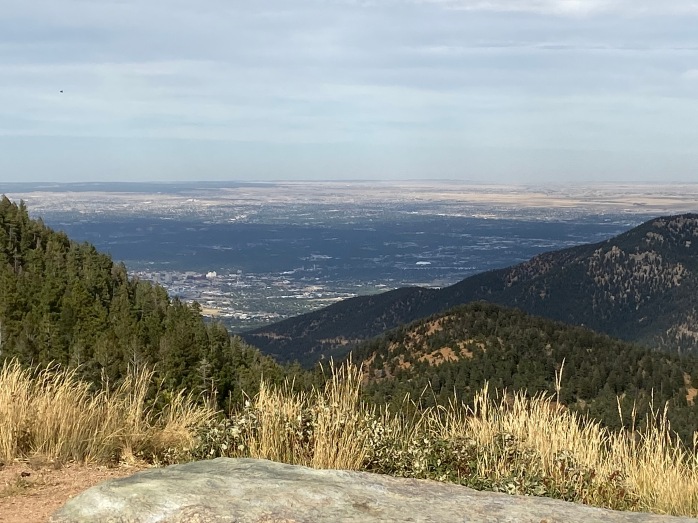 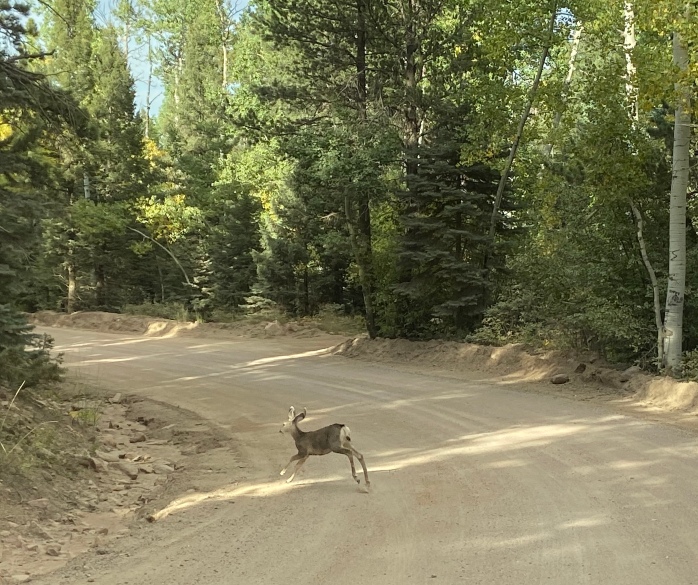 Bullet holes in the “No Shooting” sign……..hhhmmm 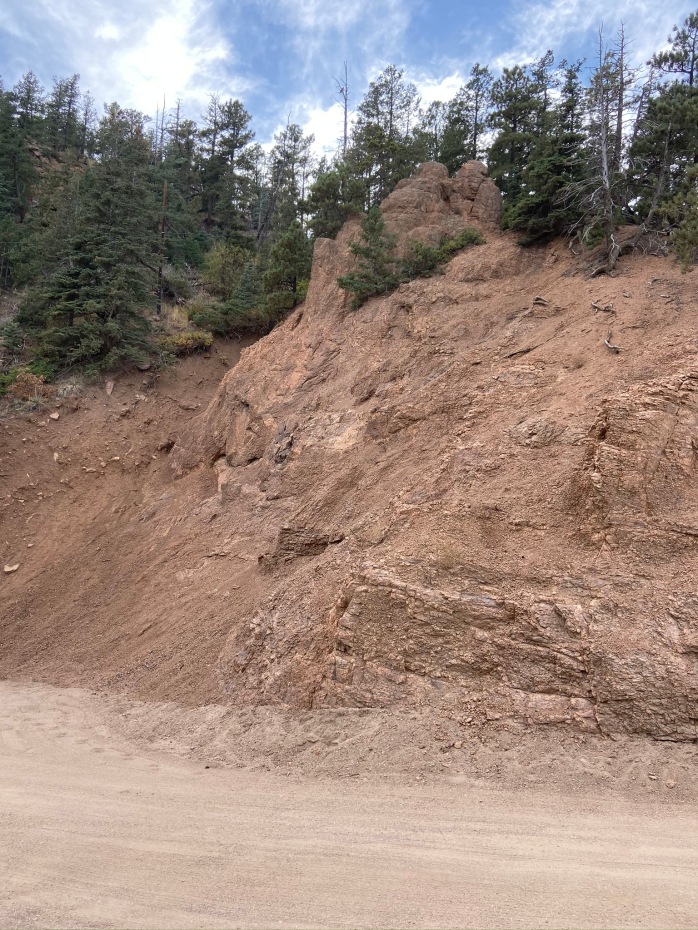 Definitely glad I booked those tours……what a riot going off road like that and seeing views I never would have seen with my rental car…..although, there will be a post later on that tells of a situation I got myself in with my rental that came close!!! LOL