This past Tuesday, a friend and I went on a day trip bus tour with the Busy Buddies group. It was a wine tasting tour with stops at three wineries in the Finger Lakes and a lunch cruise on Seneca Lake in Watkins Glen. I had been looking forward to this day trip – I love the Finger Lakes and have not been to Watkins Glen since I was a child! I woke up that morning and it was raining – HARD – and the forecast showed heavy rain, including possible thunderstorms, and cooler temperatures all day! I hoped it wouldn’t ruin the day! As it turned out……it didn’t!!! It rained off and on and we had to put our hoods up to get into a couple of the wineries without getting wet, but we were mostly inside and the rain let up at key times to let us enjoy the day! As for the boat ride – it rained while we were eating and then the sun came out and it warmed up when we were done with lunch so we could open the windows and enjoy the view! Perfect cooperation from the weather!

The bus picked us up at Tops in Albion and we rode to the first winery – Wagner Winery and Brewery in Lodi, NY. We had five rounds of tastings where we could choose if we wanted the sweet, dry, or beer offering. I tried one of the beers – a nice pilsner that I really enjoyed. The rest of the rounds I picked a wine – mostly the sweets, but did try one dry red. I liked them all and purchased two that I particularly liked. We left with our complimentary wine glasses and the taste of fine wines on our pallets!

Next stop was the lunch cruise on Seneca Lake. It was a very nice two hour cruise – the food was INCREDIBLE!!!! Usually, I find the food on these lunch cruise things to be “OK” and sometimes a little less than “OK” – usually a buffet. This was a sit down meal served by waiters with table cloths and real silverware!!! We had the choice of roast beef or chicken – I had the roast beef and my friend had the chicken…..both offerings were sooooooo good!!! And, the scenery was beautiful and the weather, once it stopped raining after lunch, was quite pleasant, in deed!

This was our boat 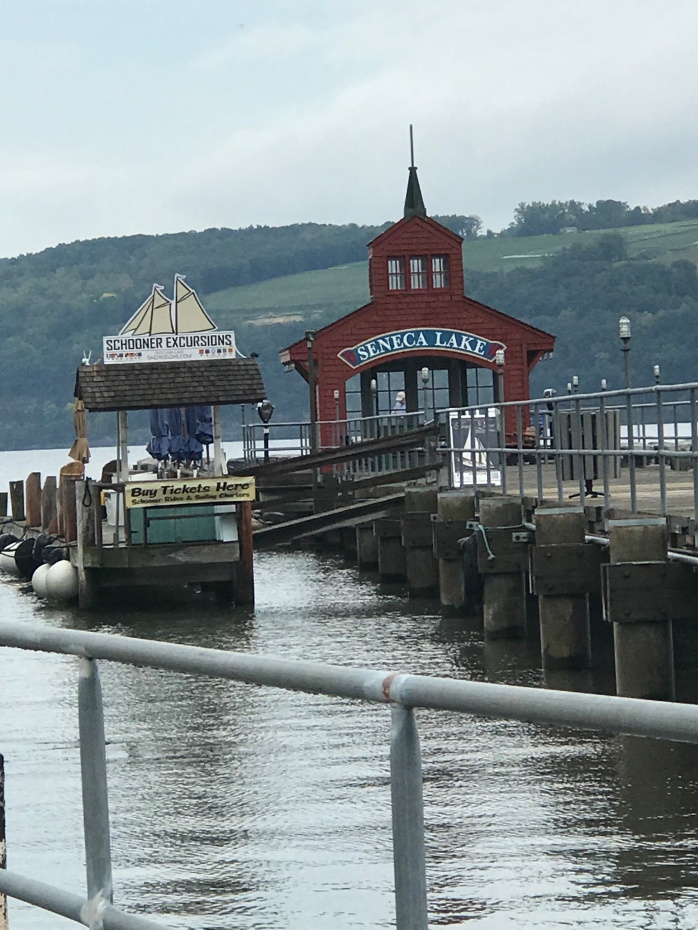 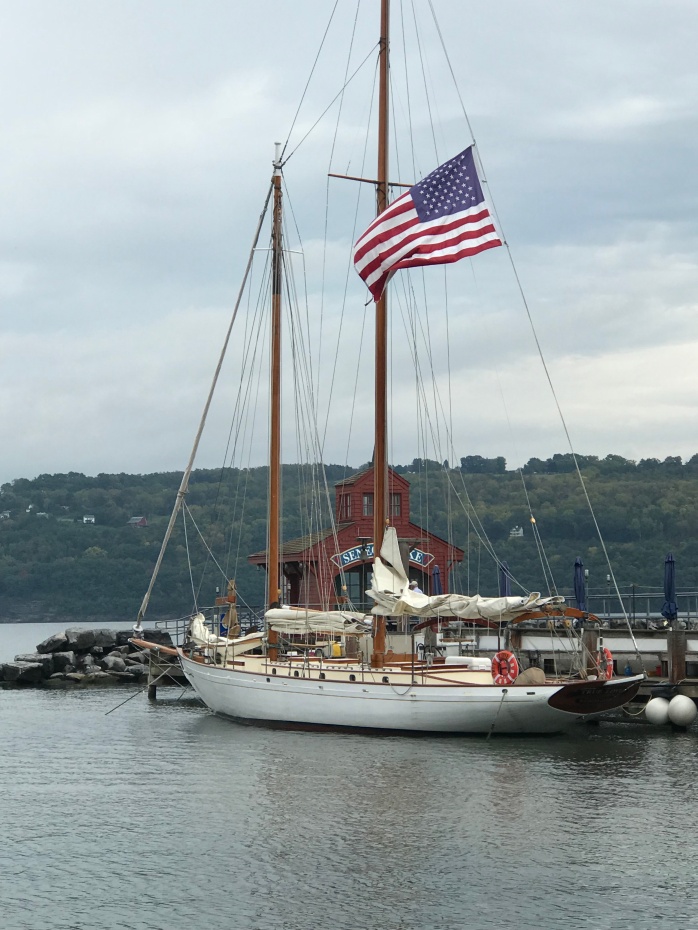 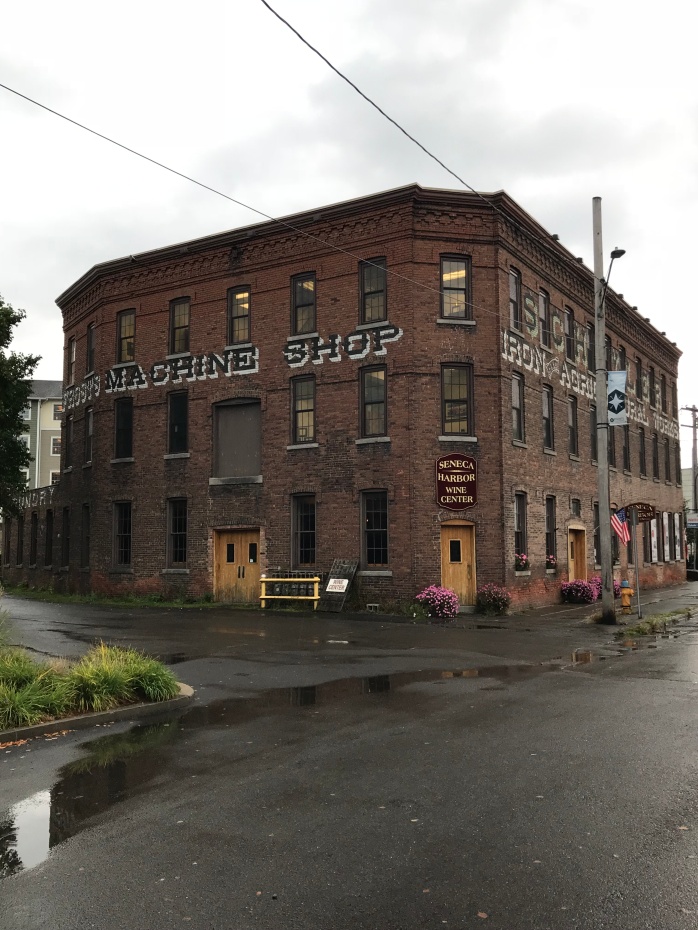 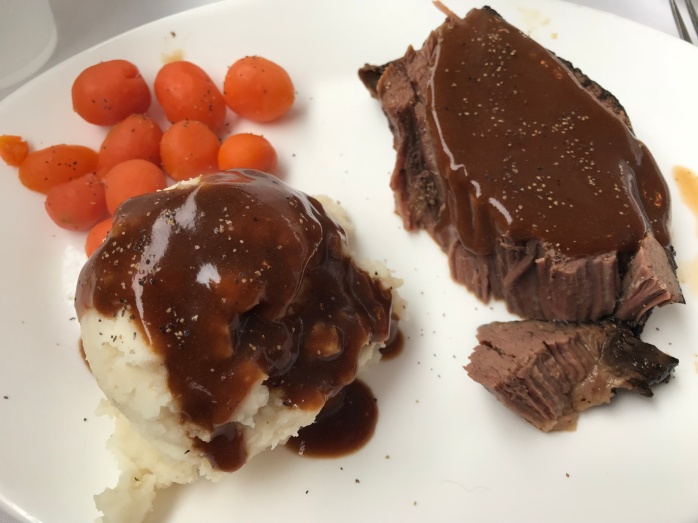 My lunch —- it was soooooo good —- the best roast beef I’ve had in a long time! So tender, juicy, and a rich, delicious flavor! The potatoes were good, too! But, it was the carrots that had everyone talking — both the roast beef and chicken entrees came with the carrots —- we all thought they used some special tool to make them into those little balls and everyone commented on how super sweet and tender they were! Simply amazing!!! Later, Mitzy, our travel agent who organizes trips for the group, told us they were from Argentina and they actually grow that way!!! I gotta try to find them…….maybe Wegmans carries them???!!!! They also served us a wonderful salad, rolls, and a brownie for dessert! 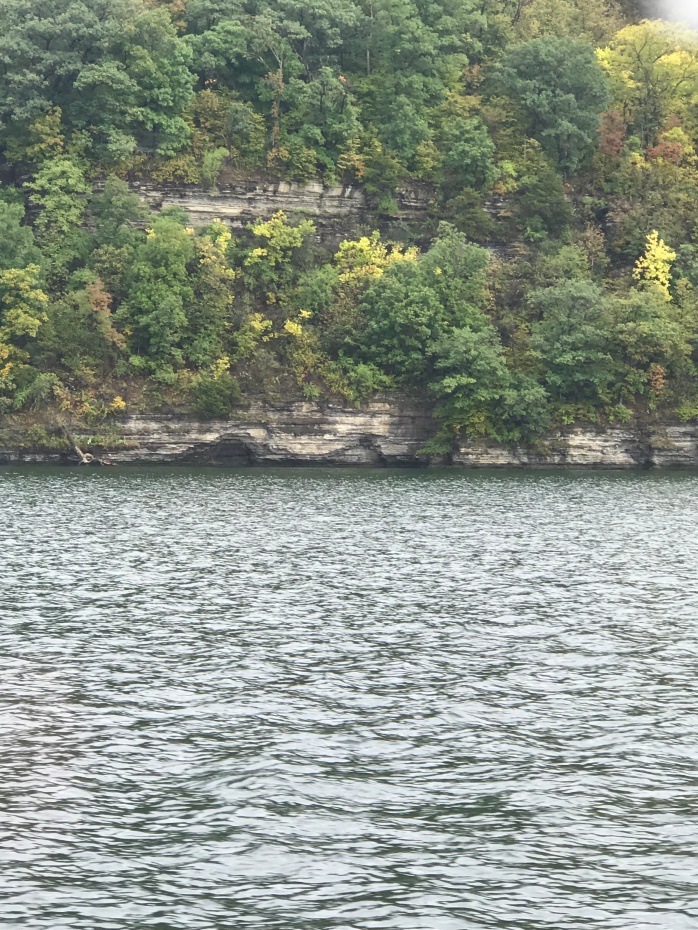 I missed getting a photo of the huge waterfall we saw, but did get photos of several small ones, like this one 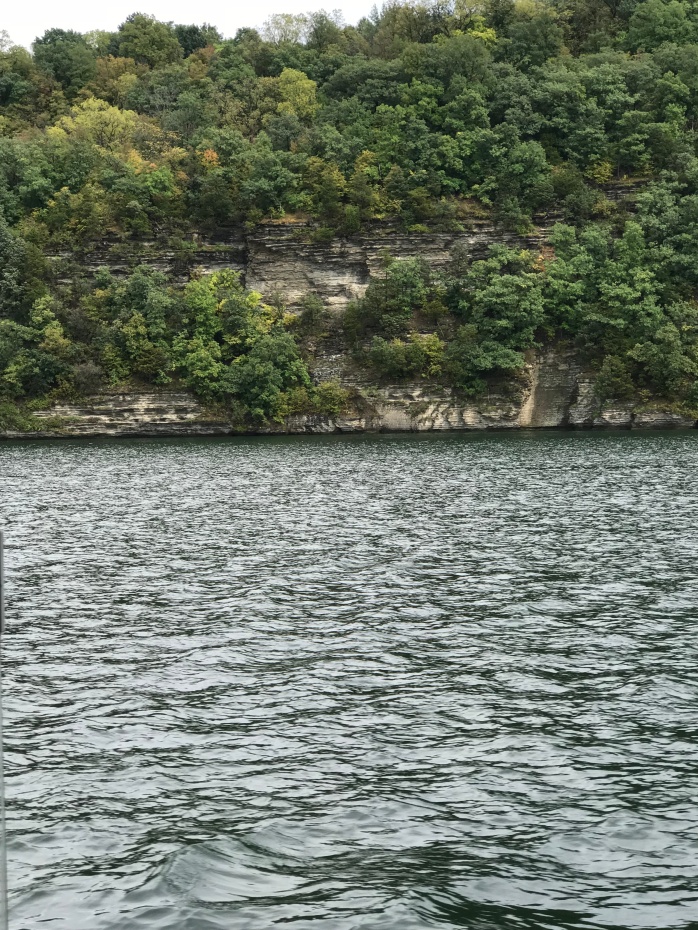 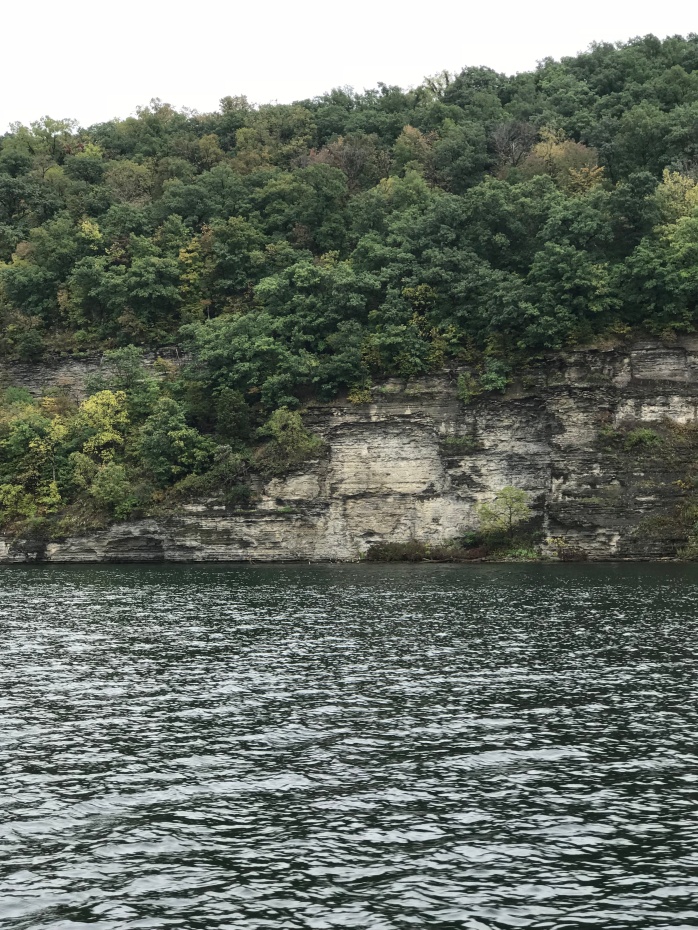 It’s a little early for the fall foliage, there, but we got to see some…… 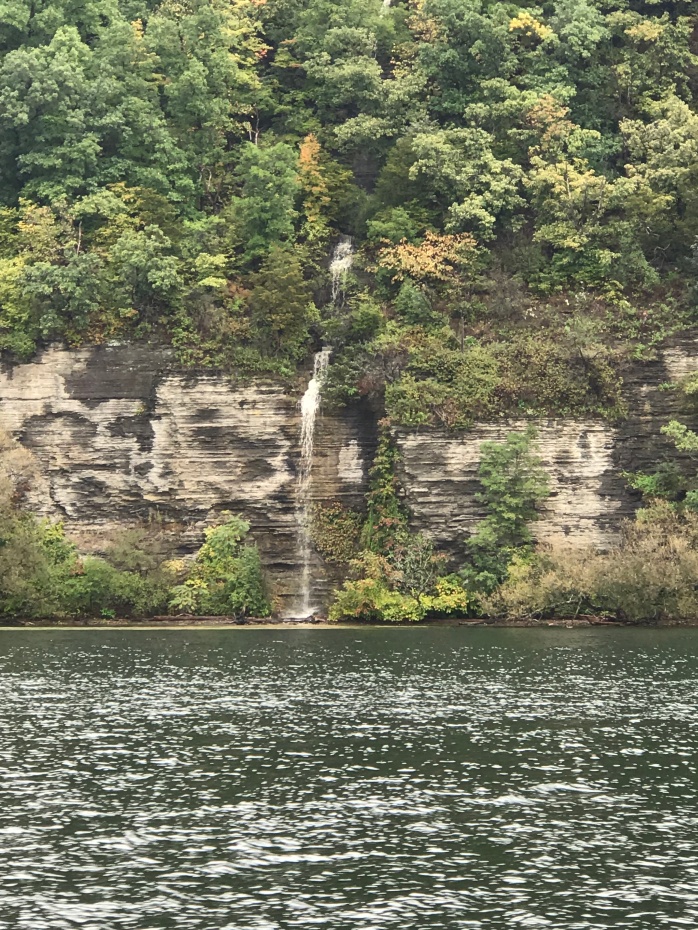 Painted rocks — parts of this was actually painted by the Seneca Indians long ago — the flag and tee-pee were added later. 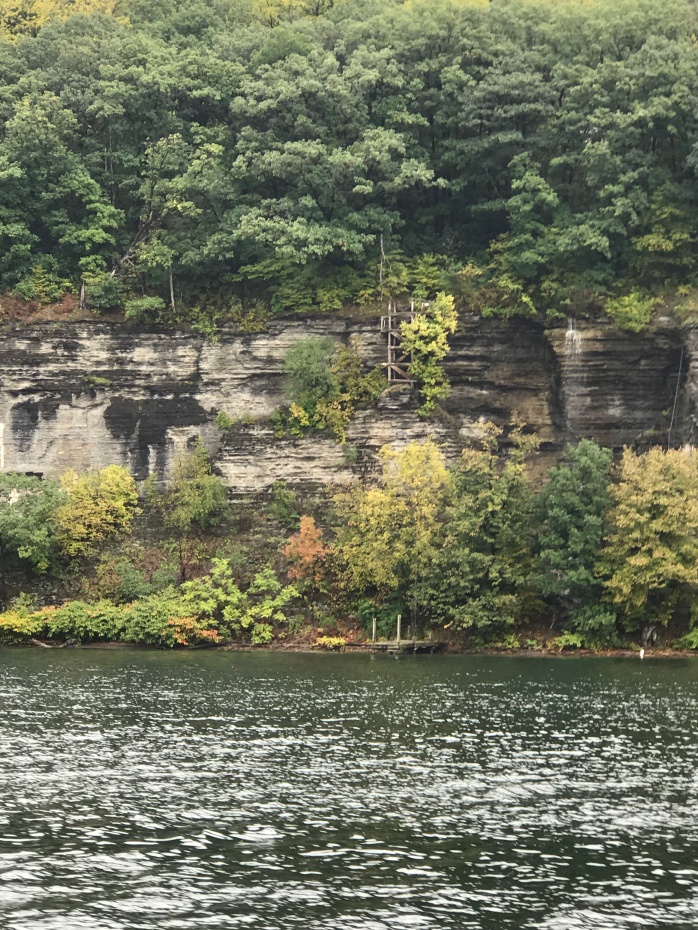 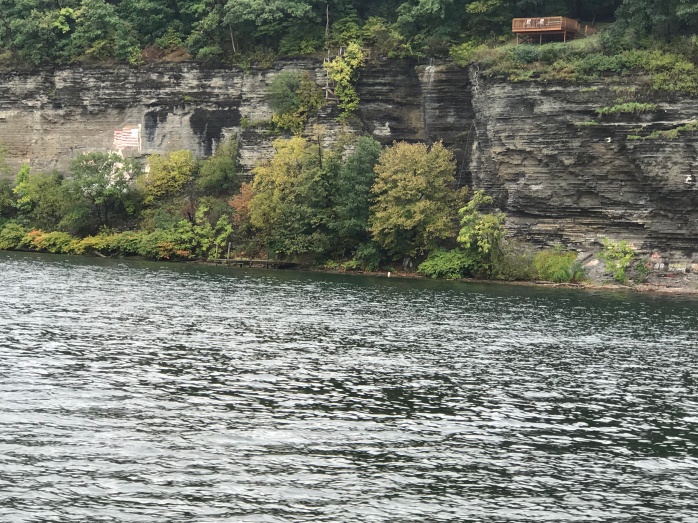 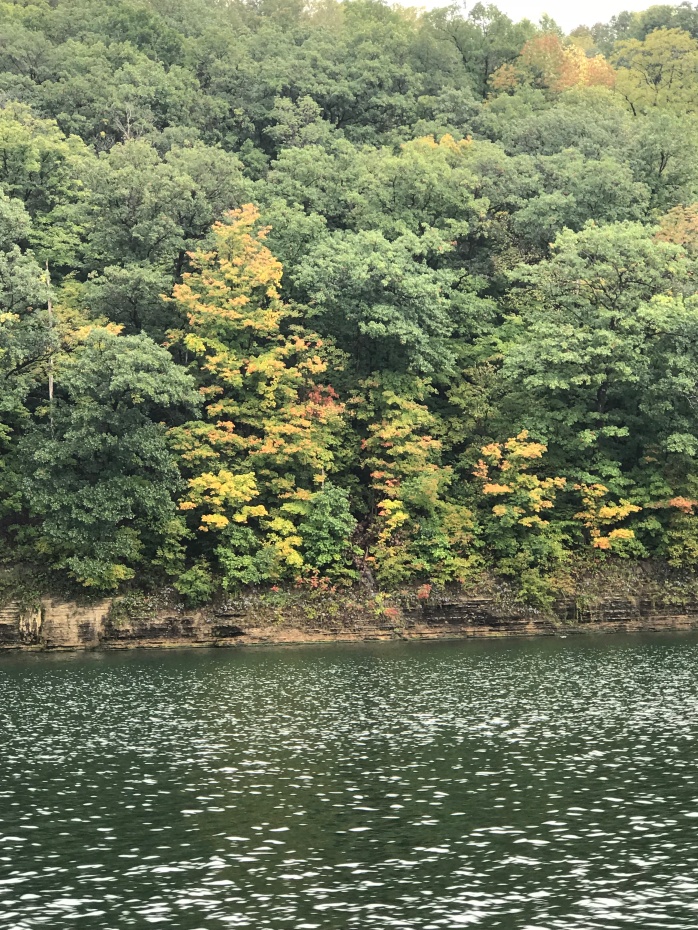 Salt factory — I forget the specific details we were told, but suffice it to say that there is enough salt to be mined from the Seneca River to last the whole world a VERY long time!!!

Out next stop was the second winery on the tour – Magnus Ridge Winery in Rock Stream, NY. This was everyone’s favorite! They put us in a big tasting room where we sat at long tables. They came around with EIGHT rounds of tastings (we chose between sweet or dry each round) and cheese pairings (of course, I skipped the cheese because of my allergy, but everyone else raved about it)! I liked every wine I tasted, except one – and that one I didn’t particularly care for it, but didn’t really DISlike it! I purchased four bottles – three for myself and one for my brother for his birthday, along with two different cheeses for his birthday, as well (he’s not allergic – haha)! 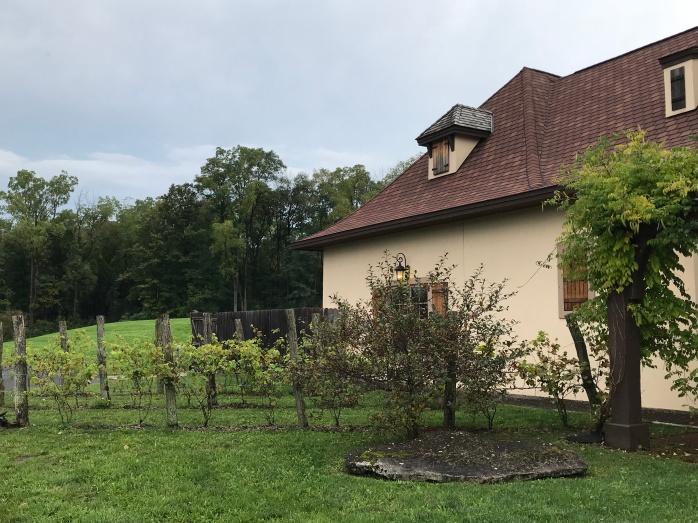 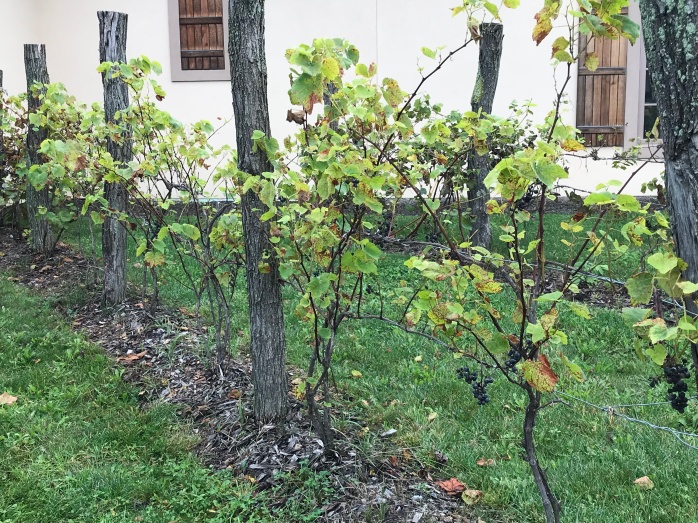 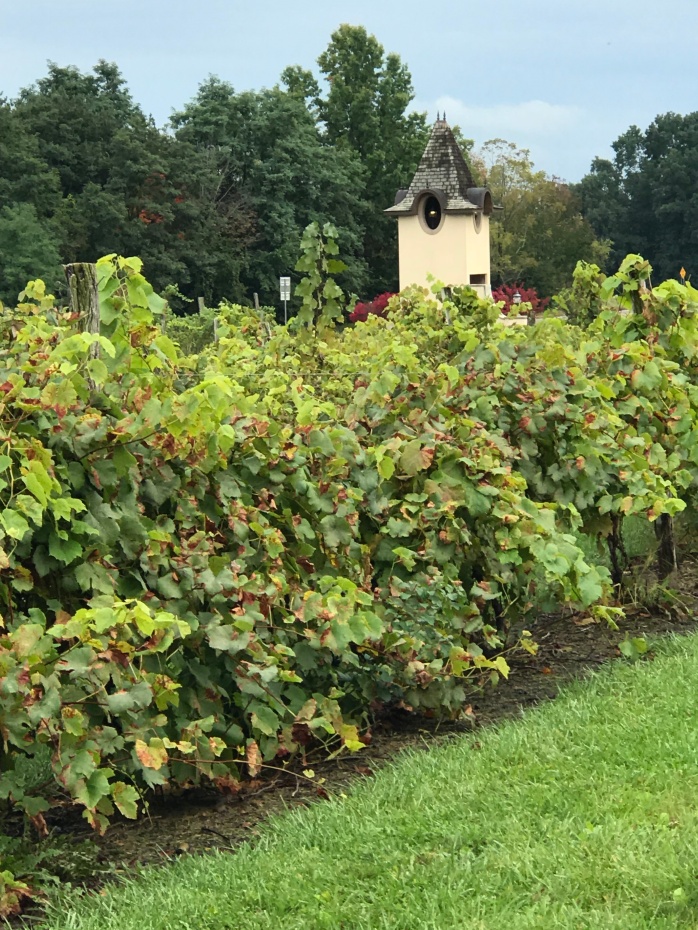 Our last stop before heading home was Anthony Road Winery in Penn Yan, NY. It was a nice winery, but we were kinda spoiled by the last one, so……LOL I did enjoy their wines, but none blew me away to the point I wanted to purchase one. Their gardens, though, were amazing — so beautiful and fun to walk through and photograph!

I was amazed at the beauty of the trees on either side of the entrance —- they are Weeping Alaskan Cedars! So whimsical!!!

One of many quotes painted on the ladies room walls……..hahaha 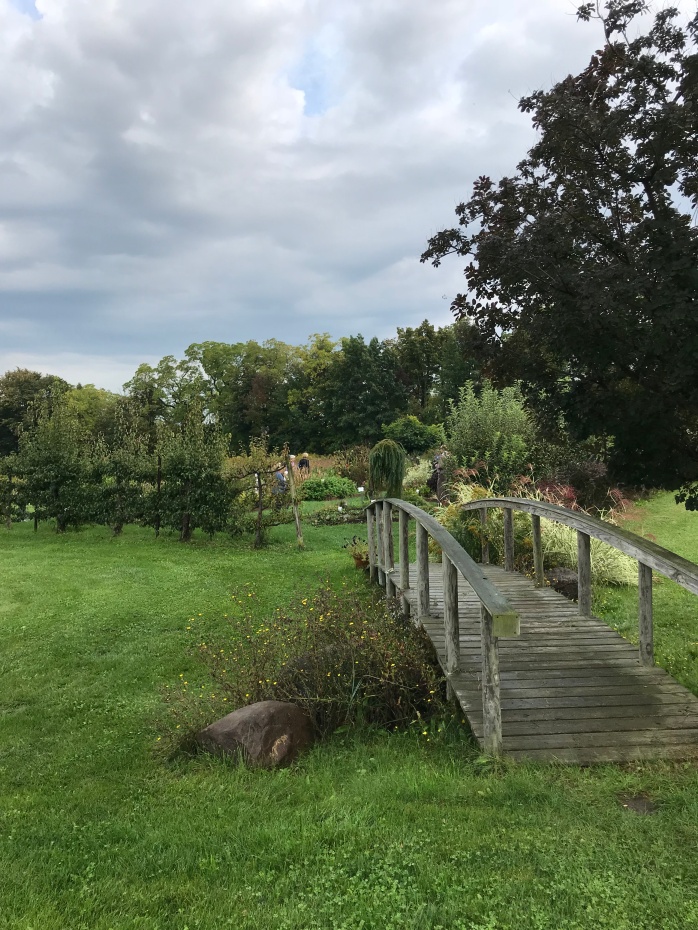 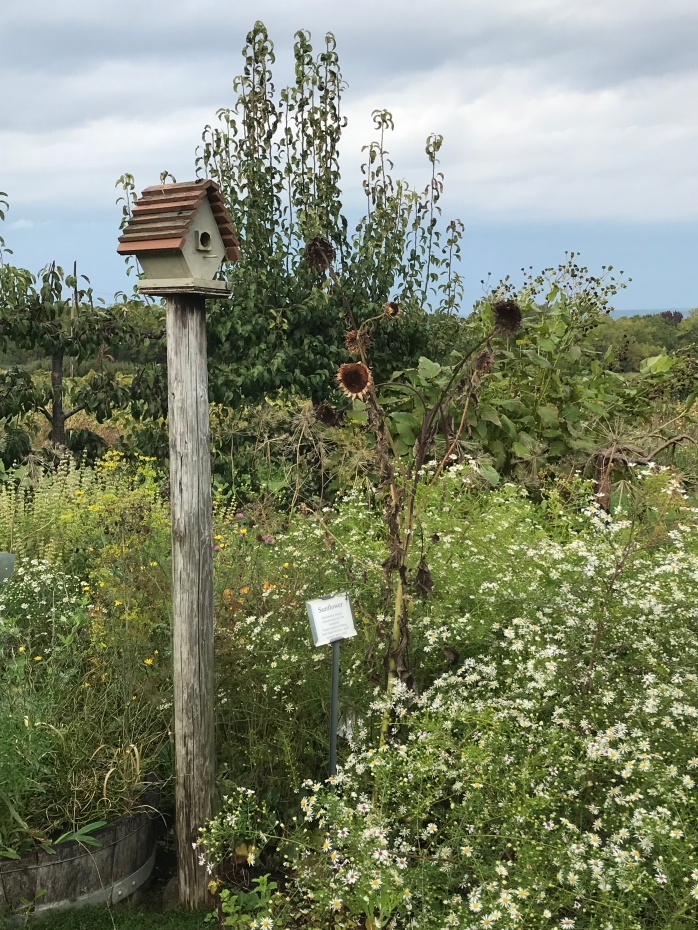 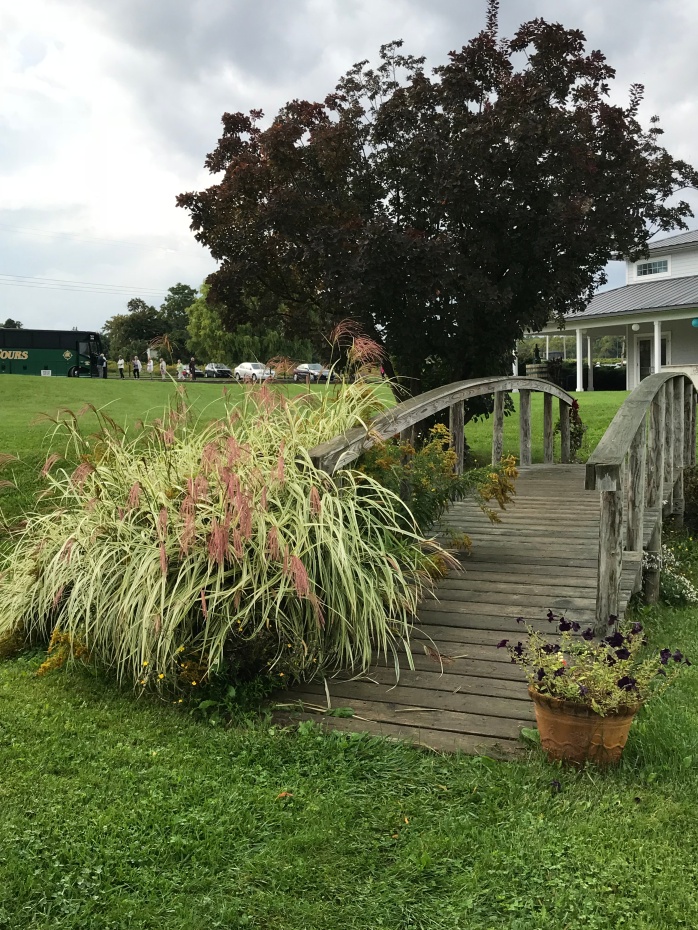 And, this is what I bought —- remember, one bottle and the cheese is for my brother’s birthday, so it isn’t as much as it looks like……hahaha! For myself, I got two from Wagner Winery and three from Magnus Ridge Winery…..and the complimentary wine glass (they gave it to us……I didn’t sneak it off in my purse!!! hehehe) 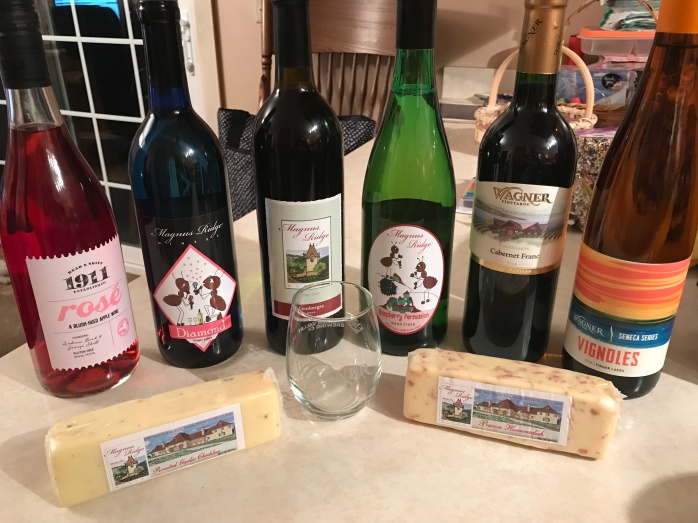 Another fun day trip with the Busy Buddies group…….I always enjoy the things Mitzy puts together for us!