In my fourth and final post covering our recent Caravan Bus tour of five western states, I’ll talk about and provide photos of our 7th and final full day – Idaho and Utah!

We didn’t spend a lot of time in Idaho — but, the main stop was one of the best stops on the trip! We stopped at the National Oregon Trail Center and it was amazing! It was created and maintained solely by volunteers and donations. The center offers a first hand experience of what it was like to travel from Missouri to California in the 1800s by wagon train along the Oregon Trail. More on that as we get to the photos! I didn’t take a lot of photos while we were in Idaho — I regret that! 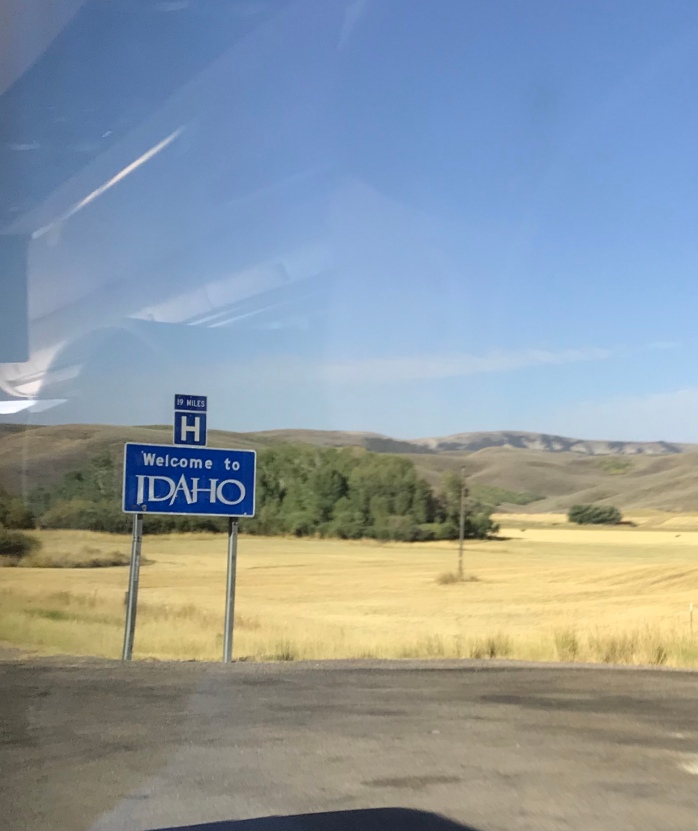 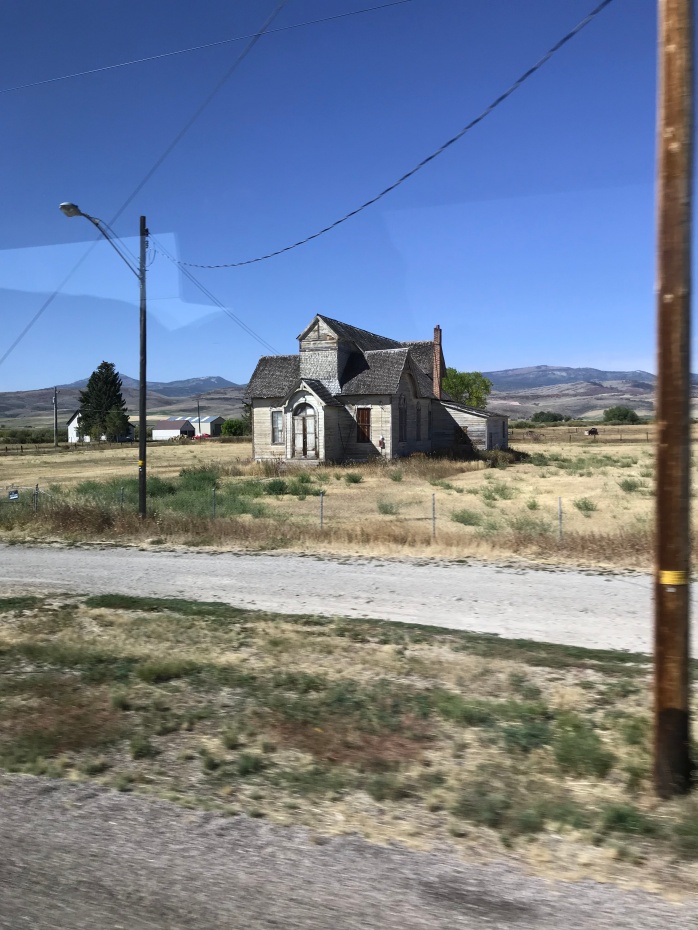 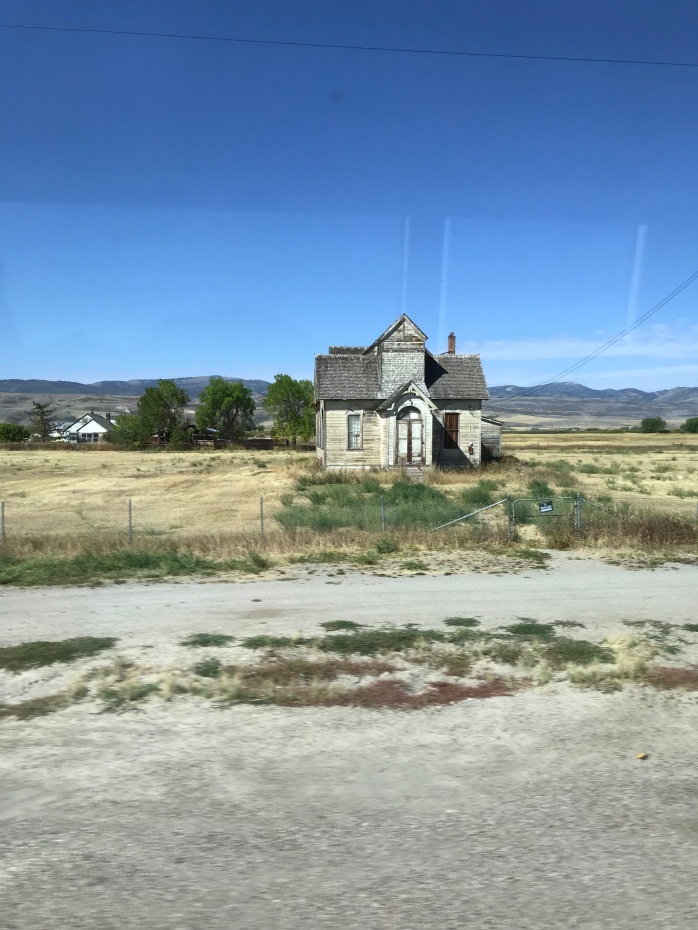 Former location of the Bank of Montpelier, that boasts being robbed by Butch Cassidy and the Sundance Kid on august 13, 1896 – they got away with more than $16,500 in gold, silver, and currency! There is a Butch Cassidy museum there, now!

Hard to see the true color in this photo thru the window glass, but this lake has the most amazing aqua water — said to be bluer than the Caribbean! 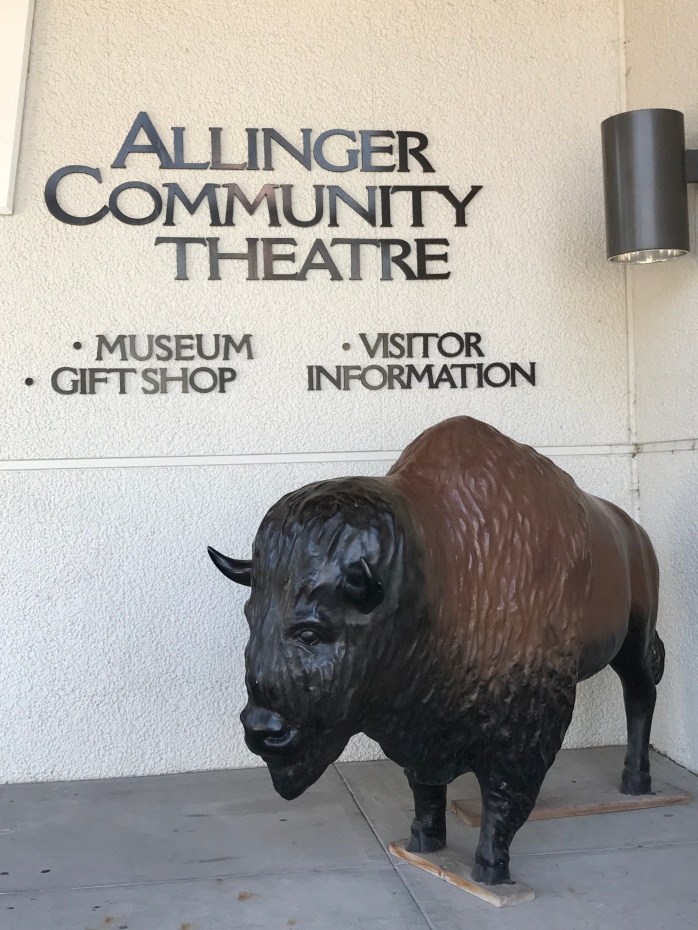 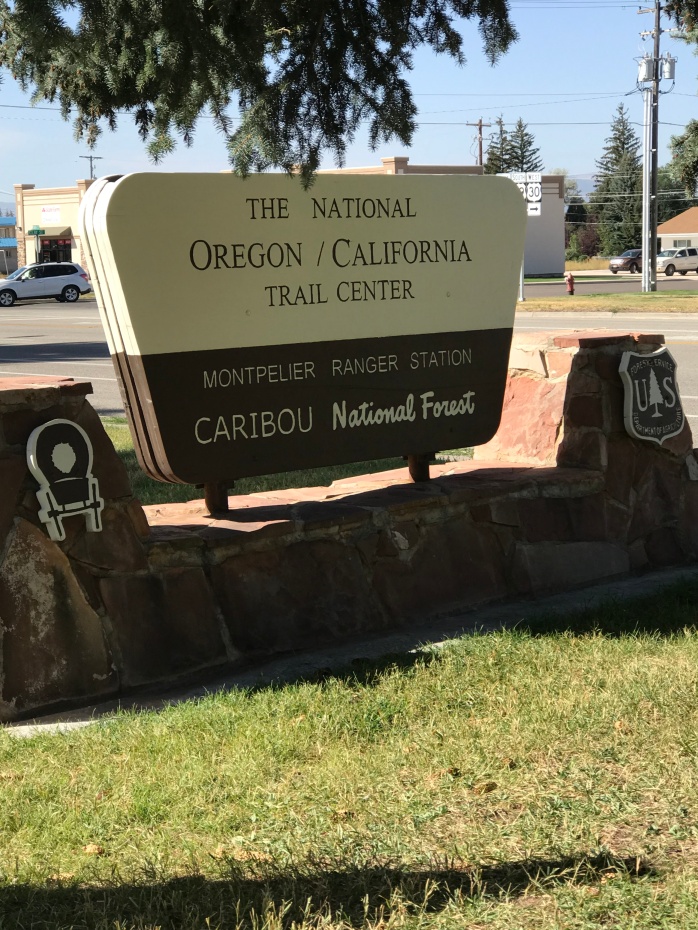 We went inside and were greeted by volunteers dressed in period clothing. We were first brought into a room where a gentleman explained the use of the wagons – how they loaded them with all their belongings, which left no room for riders – everyone walked, except the severely ill and dead. It was very expensive to join a wagon train, so it was typically the wealthy or upper middle class who were able to go. They had to purchase a wagon and then an appropriate team of animals to pull the wagon – usually oxen because they were the strongest and cheapest to purchase, as well as horses to be used if someone needed to venture off for whatever reason. It was a LONG and difficult journey and not everyone made it. Those who died along the way were put in the wagons so they wouldn’t be slowed down – they had to make it so many miles every day in order to stay on schedule – and they were buried at the next stop. 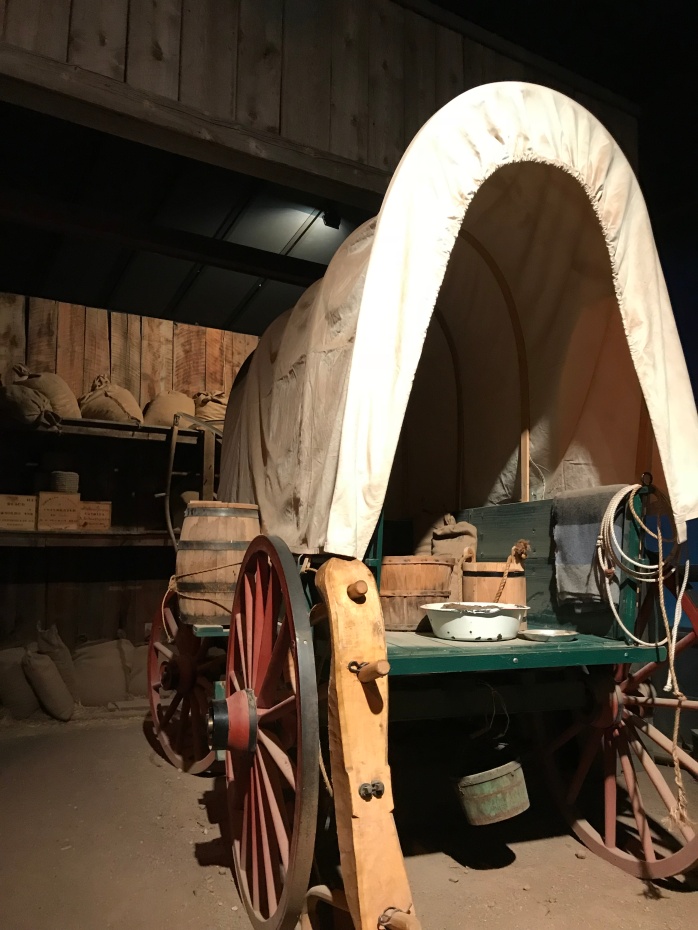 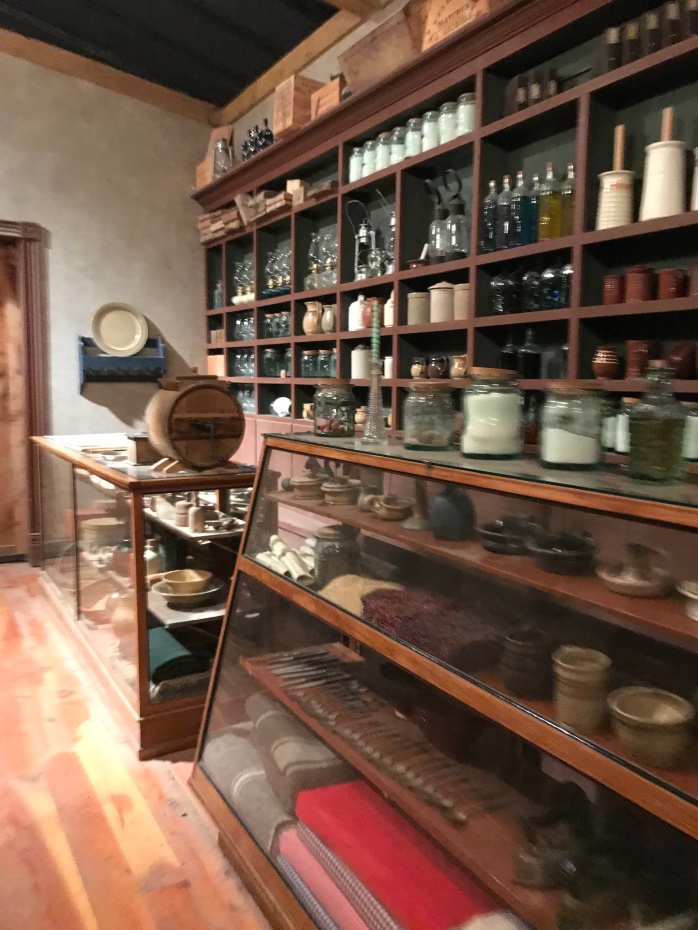 This is a buffalo chip — everyone on the wagon train had a job – it was the kid’s jobs to hunt for and gather buffalo chips that were old enough to be dried just right. They found that buffalo chips were extremely efficient fire materials – they burned hot and long.

Then, we were taken into a dark room where we got on a wagon and sat along the side benches. Once on the wagon, it began to pitch and bump as we proceeded on a simulated trip along the Oregon Trail. During this time, recorded readings of actual diaries of pioneers who traveled the trail were broadcast for us to listen to – fascinating!

We then left the wagon to sit around a simulation of a camp at the end of a long day on the trail where a lady explained what happened during the camp hours and told stories passed on by those who made it to their destinations. 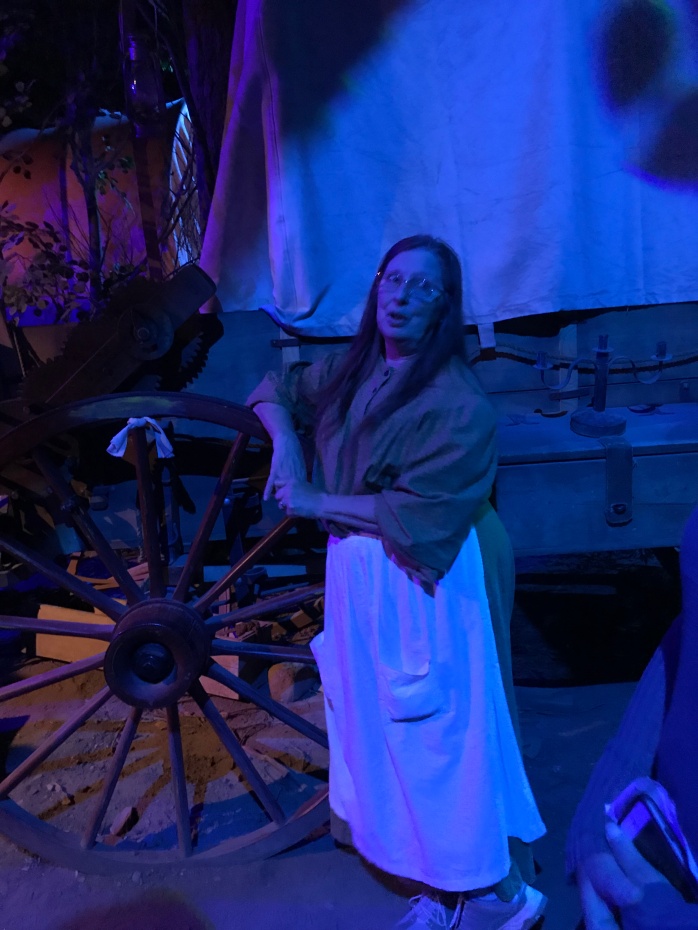 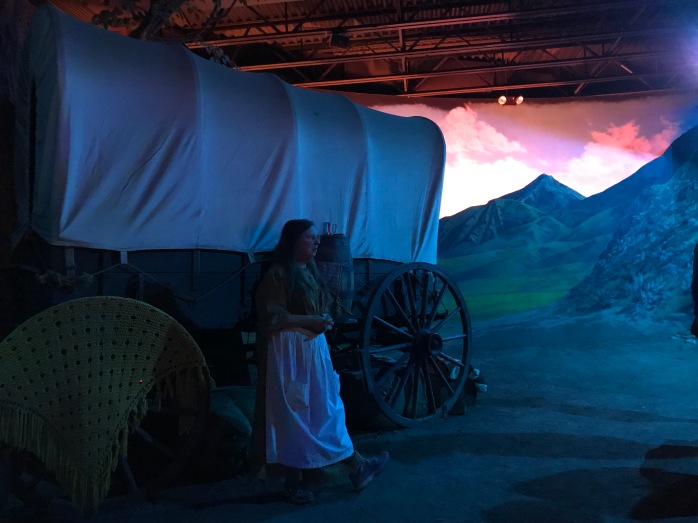 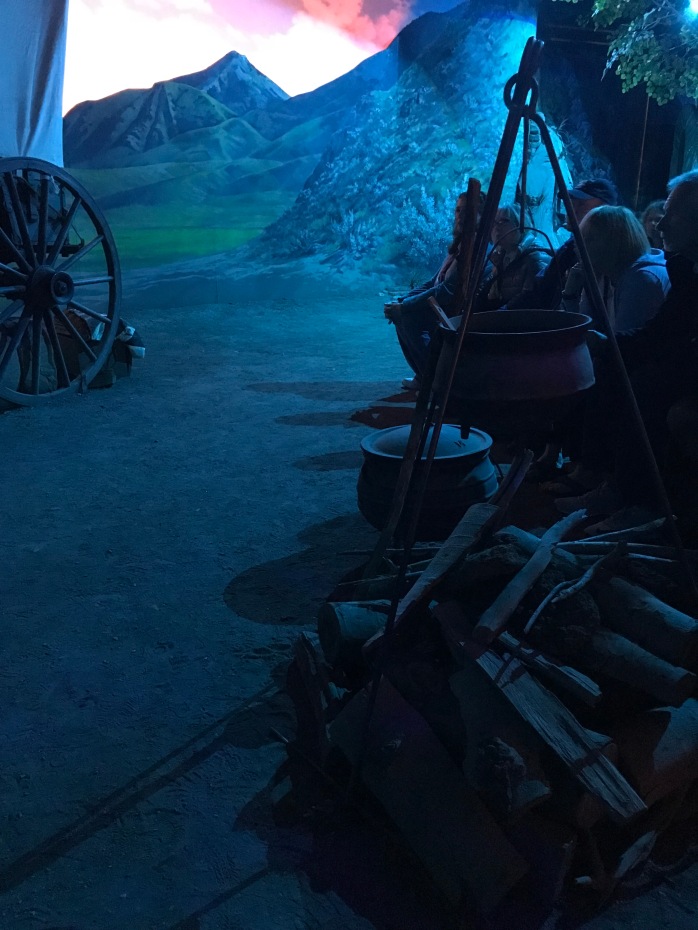 Then, when she was done, she asked the ones who were given white handkerchiefs to stand in a row in front of the group. When they did, she told us to say goodbye to them — they represented the 1 in x that died along the trail……and then she waved her hand and declared them “back to life”! 😀

It was an awesome experience! So interesting and fun! Our guide told us that they are very proud of their little center and theater…….we all agreed that they SHOULD be, cause they created something truly amazing!

Another cool thing happened while we were at the center! One of the volunteers asked where we were from and my friend and I said “Upstate NY” – she said that one of the other volunteers was from there, too! So, she found her and pointed her in our direction — I figured there is a lot of area in that category, so it was highly unlikely that she was from anywhere near us, here in tiny little Albion! So, when she came over to talk to me, I narrowed it down and said I was from Western NY and she said she was, too —- she said, I doubt you’ve heard of it and said she was from Lyndonville……OMG – that is in the same county as Albion and just a few miles away! So I told her I was from Albion and she said she’s never come across anyone out there that’s ever heard of Lyndonville! So we chatted a bit before we had to say good bye so I could get back on the bus!

I wish we had spent more time exploring Idaho —- I think I’d like to go back, someday, and see more of it! 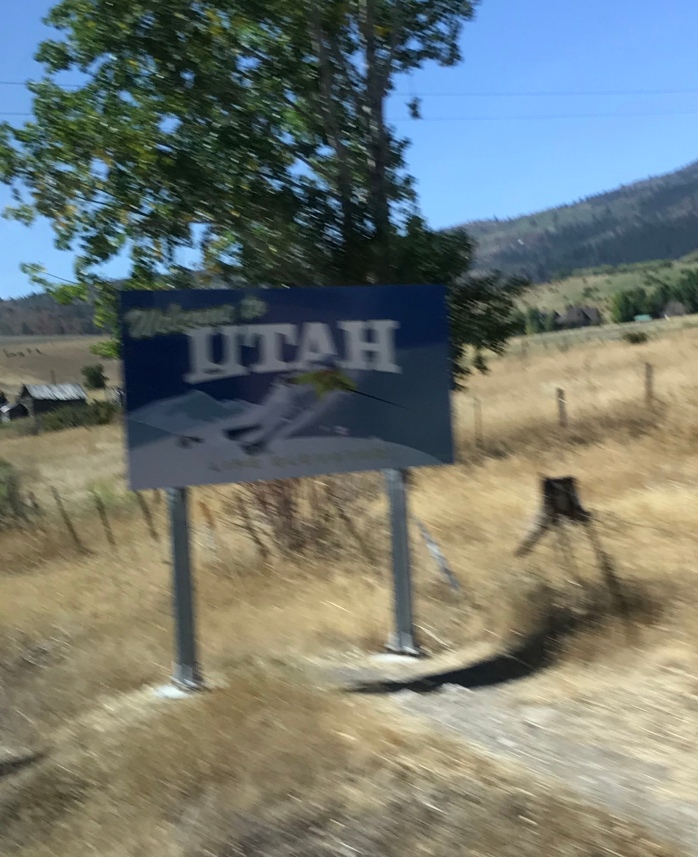 We spent the rest of the day and that night in Utah. This is another state that I think I’d love to return to and see more of! We drove through a good portion of the Utah country side – so beautiful – like all the other states we visited during our seven days! 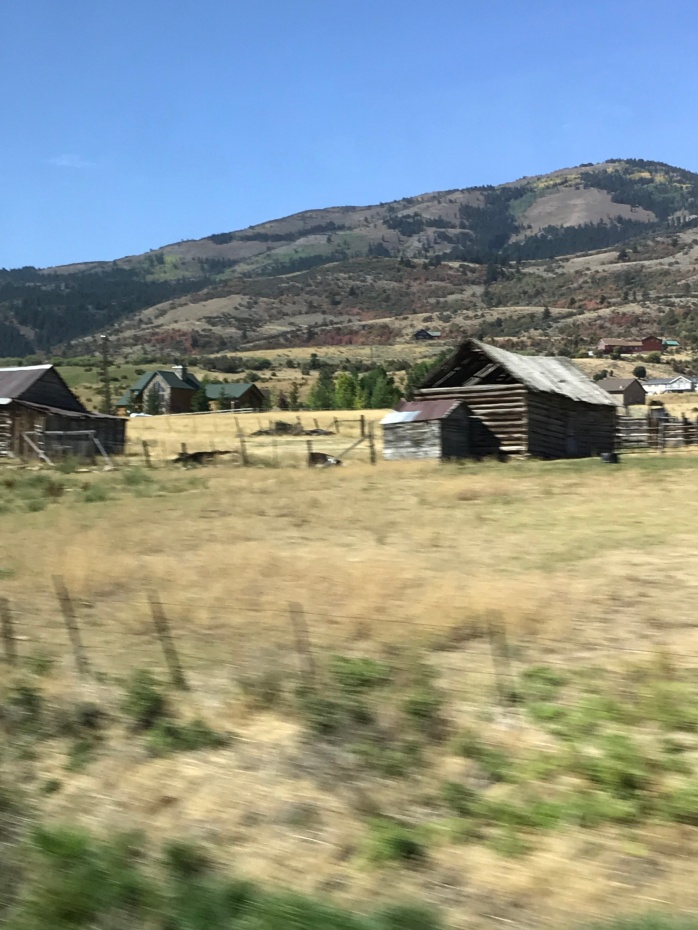 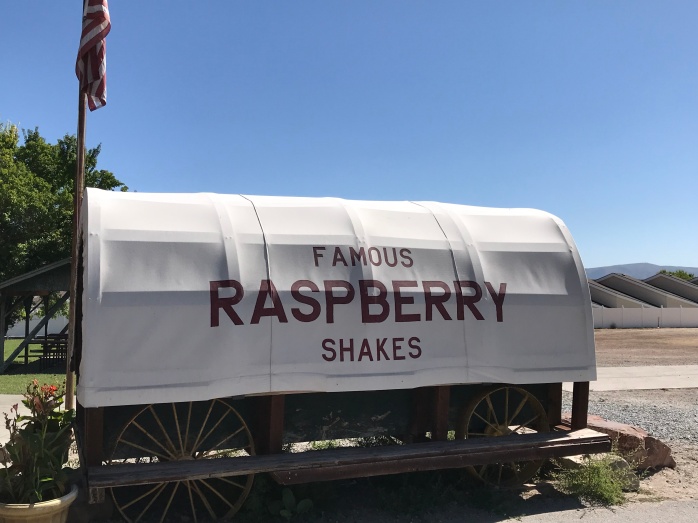 We stopped for lunch in, I think, Lava Hot Springs – home of the “Famous Raspberry Shakes” – which I had had to try – it was very good! 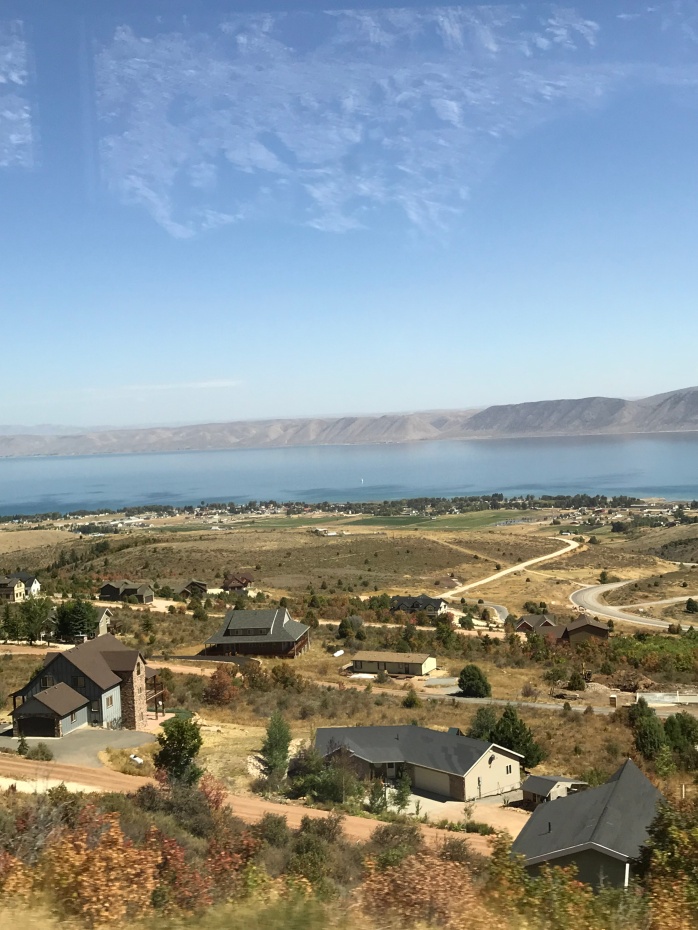 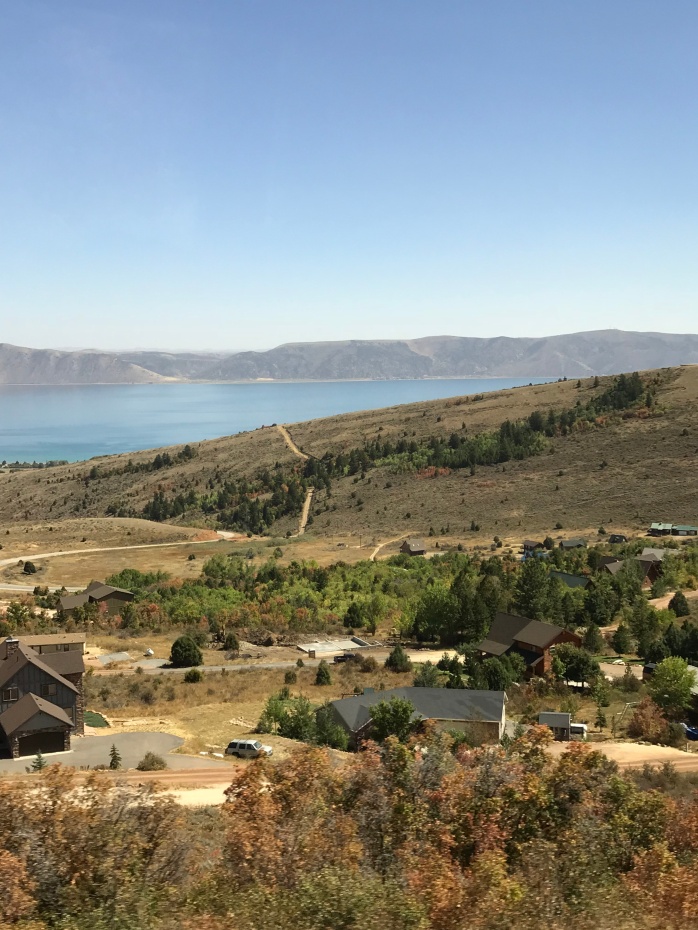 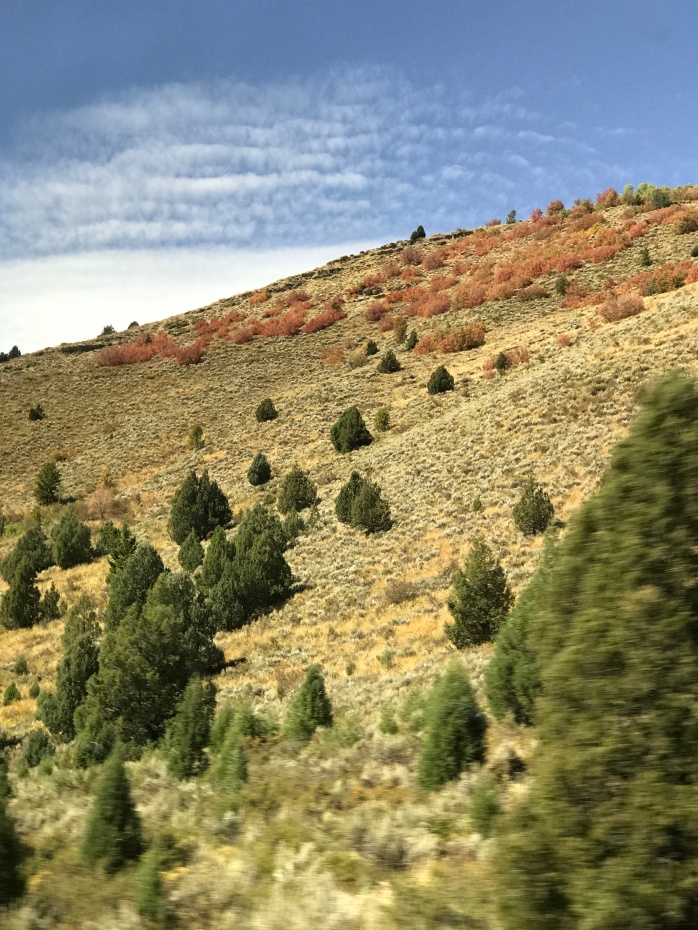 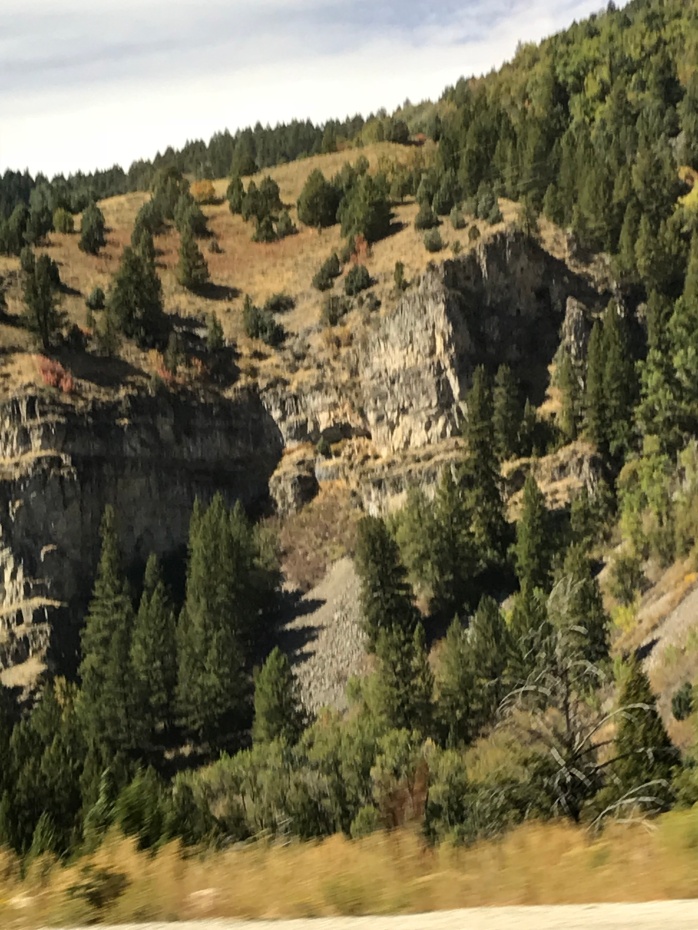 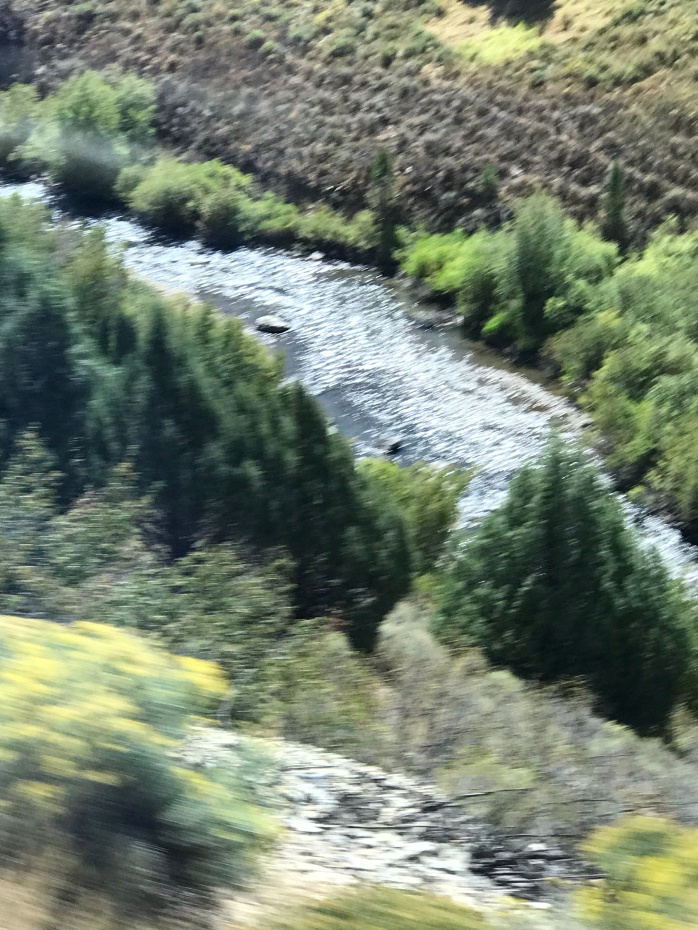 We spent several miles on a VERY high twisty turny road on the side of a mountain……it was a bit scary at times! 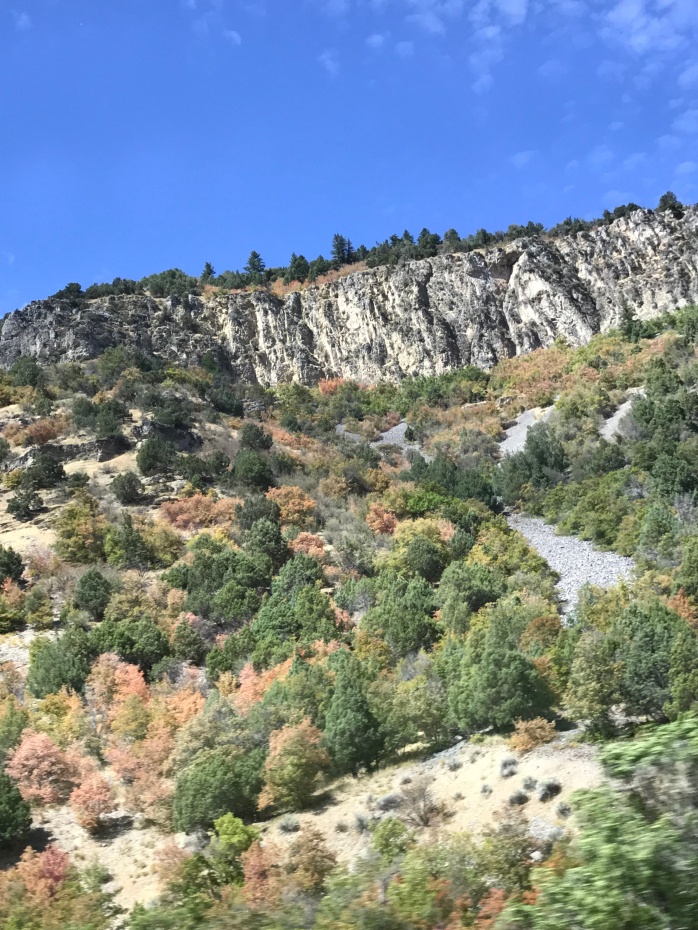 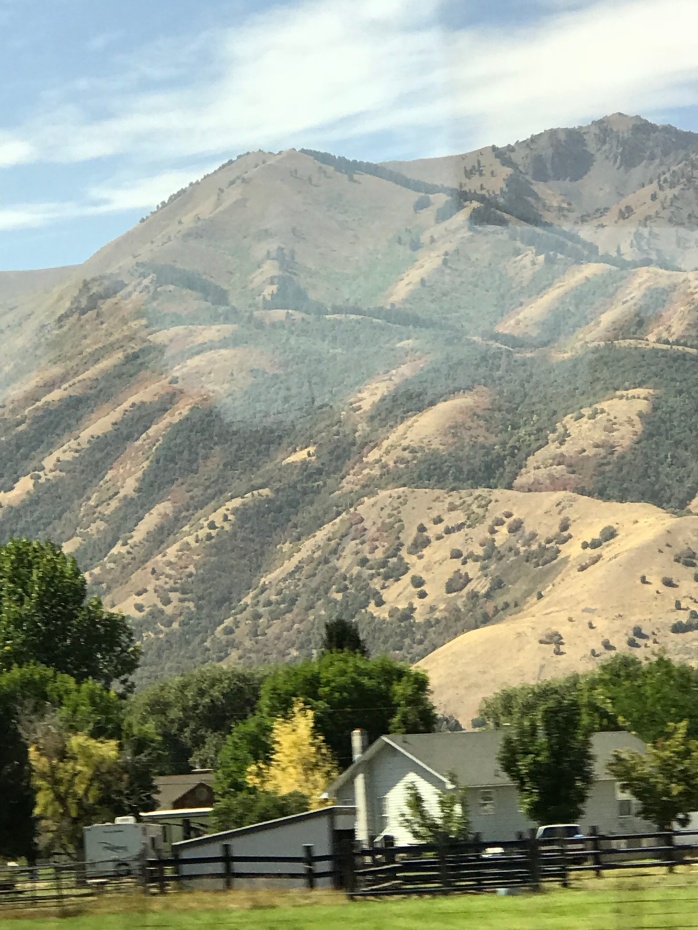 And, finally, we got to Salt Lake City…..where we stayed at a hotel right in the middle of downtown – a couple blocks from Temple Square and the Mormon Tabernacle! We were let out to tour Temple Square and it was fascinating! Two lovely young missionaries led a guided tour through two of the buildings and the courtyard. We toured the Tabernacle and the Assembly Hall – we could not tour the Temple, because only those Mormon who follow the strictest of the church’s covenants and are declared “clean inside and out” may enter – temples are considered THE House of God and no unclean thing may enter – they are not used for regular Sunday worship – only sacred rituals, such as weddings, etc. Sunday services are held in Meeting Houses – a more informal house of worship. So, the Temple was off limits to us. We also toured the beautiful gardens in the courtyard.

This is the Tabernacle — I was surprised that it looked more like a sports arena than a place representing religion and worship……until I got inside!!!

Inside the Tabernacle — the two young missionaries who led our tour. 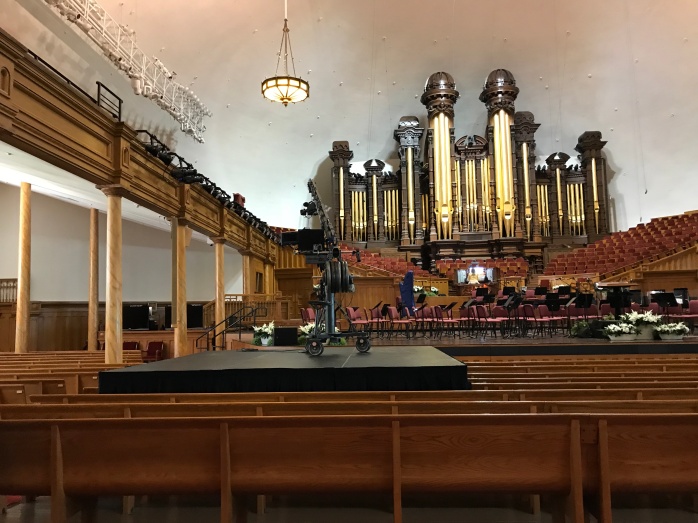 This organ has over 11,000 pipes, multiple keyboards, and multiple sets of foot pedals! WOW! 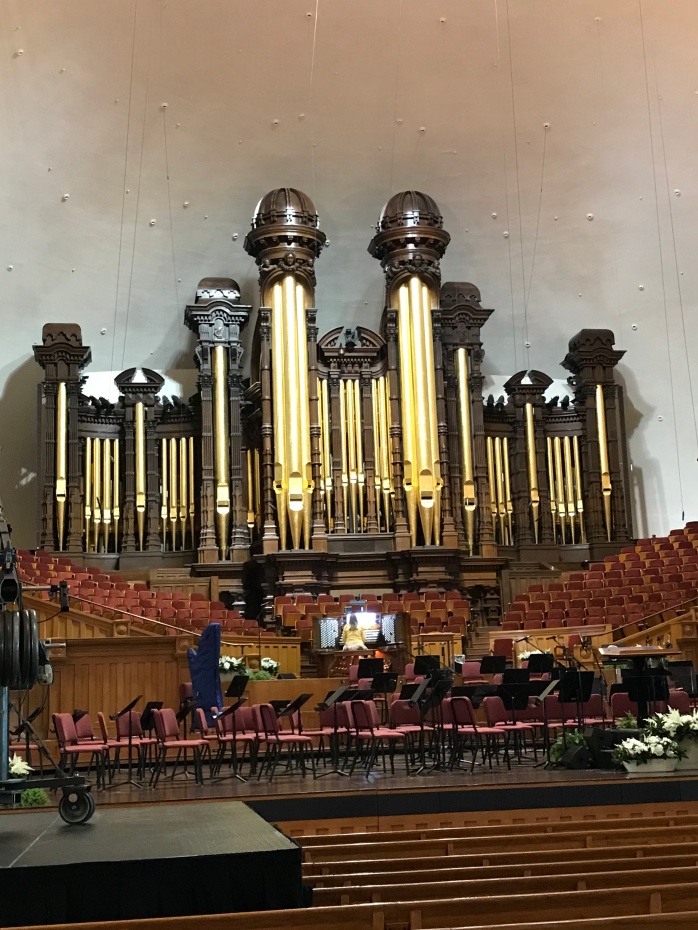 The organist was playing while we were there – the sound was amazing! We were told that the acoustics in the Tabernacle are perfect – if the organist wasn’t playing they could drop a pin in the choir loft and you could hear it in the back of the room! 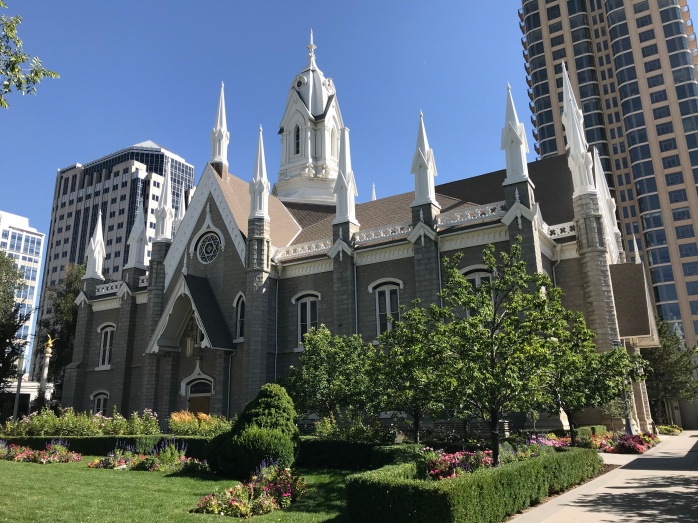 This is the Assembly Hall that we also toured — it is currently used for worship, meetings, lectures, recitals, and concerts.

The benches are original to the building – they are situated very close together and had to be elevated on blocks (see the bottom of the legs) because people were typically much shorter and smaller than they are, today! 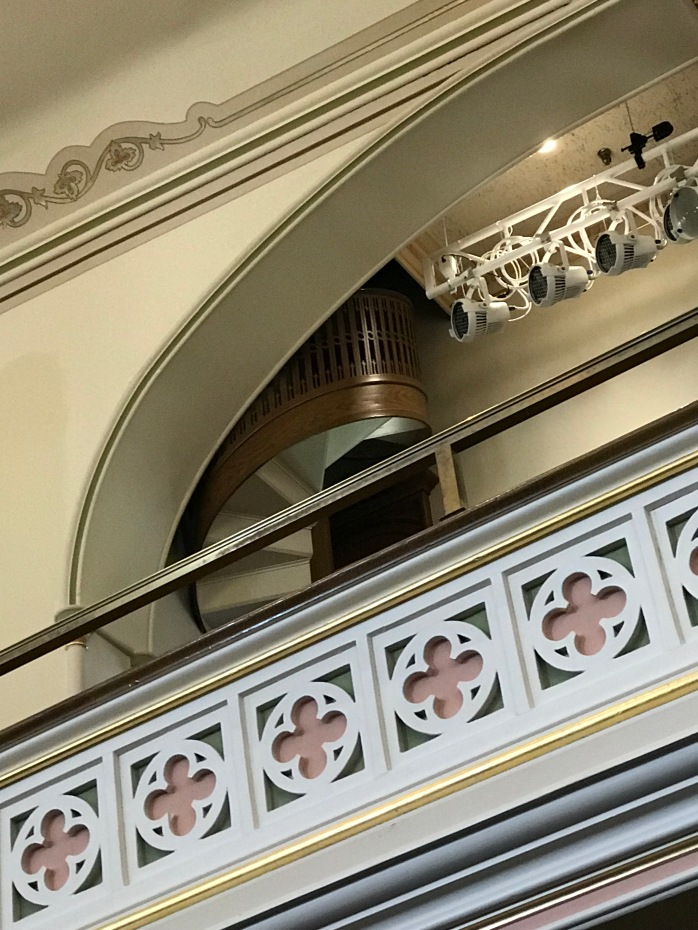 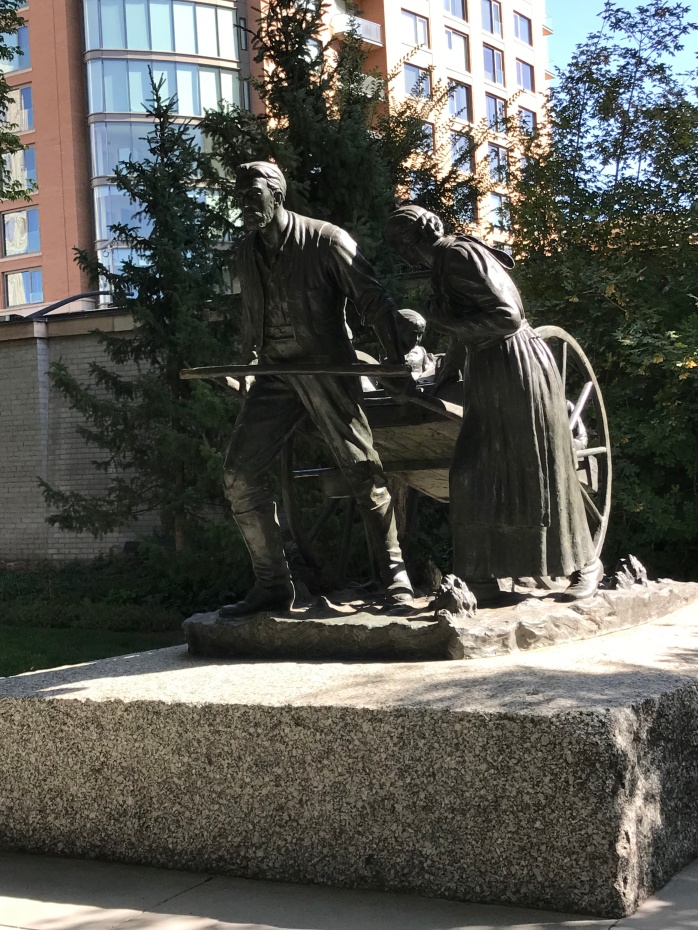 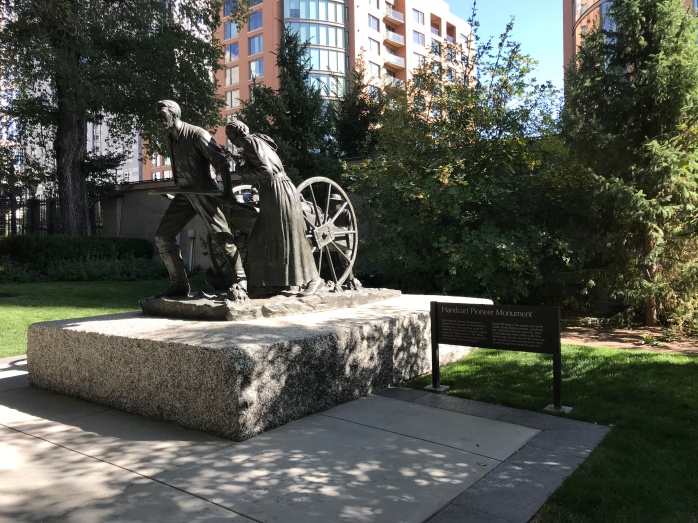 I believe this is the back side of the Temple 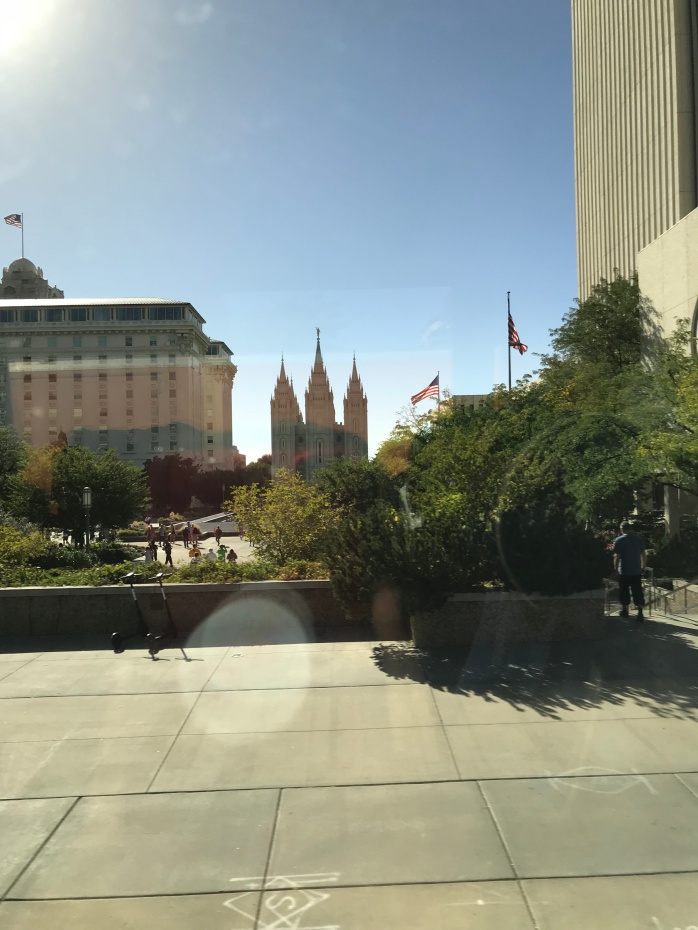 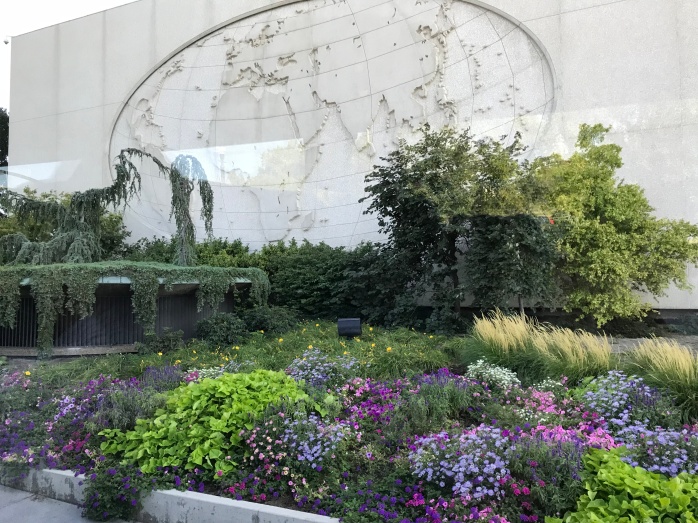 Then…….we had a wonderful opportunity! The Mormon Tabernacle Choir rehearses in the Tabernacle every Thursday evening, except when they are on tour, and it is open to the public! We were there on Thursday evening!!! WOW!!! So, we attended the “Farewell Dinner” to end the tour and then whoever wanted to go listen to the choir went back to the Tabernacle after dinner! DUH – of course, we wanted to do that! It was amazing —- the sound was so awesome!!! I was a bit disappointed that it wasn’t the emotional experience I expected it to be —- since it was a rehearsal and open to the public, people were more informal – they came and went and talked during the rehearsals…..so, it took away from that emotional experience……but, that aside, it was still an awesome experience and we were so very glad we went. I loved getting to hear them in person in that beautiful building!

After we left the rehearsal, we went back to the hotel and prepared ourselves for an early morning flight back home……our wonderful vacation was over! I am so happy that I was persistent and didn’t give up when I first found I waited too long to get in on the tour! I loved every minute of it…….sure, there were a few parts that were less exciting than the majority of it and my knee decided to be a little stinker and blow out on me! But, over all, it was an amazing trip — one full of awesome memories and experiences! I would totally do another Caravan Tour — they put together wonderful itineraries!

So……with this trip, I am now down to just THREE states I still need to visit: Kentucky, Colorado, and New Mexico! I figured I would try to knock them out in 2019, but now my travel buddy and I started talking about the possibility of doing a Viking River Cruise and I already booked a Transatlantic Cruise from Fort Lauderdale to Ireland in the Spring, so I’ll see how things go……I can only do so much in a year! hahaha Once I’m done with visiting all 50 states, I have a few I’d like to re-visit and see more of! So, my travel days are not at risk of ending any time soon! 😀