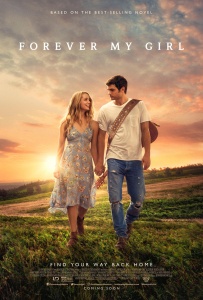 From the very first time I saw a trailer for this movie, I was hooked! The ads said “If you love Nicholas Sparks, you’ll love this movie! Well, I do love some Nicholas Sparks…..and, I assumed the mention of him in the ads meant that it was one of his books. I was wrong about that – it is actually NOT a Nicholas Sparks book – the author of the book is Heidi McLaughlin. But, I was not wrong in my assumption that it would be a good movie! A true chick-flic, multi tissue, tug-at-your-heartstrings movie! I’ll get right to it…..my criteria for a good movie were all met: I laughed, I cried, I fell in love with the characters, and I left feeling good! There, you go……

So, the story starts right out with the tugging-at-your-heartstrings part in just the first few minutes – eight years ago, small town girl, Josie was getting ready for her wedding. She’s at the church with all her family and friends fussing over her and she looks radiant in her white dress. She’s all excited and happy and ready for the best day of her life! Then…..two of the groomsmen come in and ask to speak with two of the bridesmaids……and her best friend comes back in the room to tell her that her groom-to-be is a no-show……and her world comes crashing in around her! In the next scene, we fast forward to present day and former groom-to-be, Liam Page, is now a big country music star – spoiled, entitled, difficult, and adored by his fans! A tragedy brings him back to his home town and face-to-face with the girl he left at the altar……and her seven-year-old daughter! Now, if you want to know the specifics about what happens in the next hour and forty-five minutes, you’ll have to go see the movie, I’m not a spoiler……but, suffice it to say that there is a lot that Liam has to confront and make amends for and it isn’t just that he left poor Josie at the altar eight years earlier.

Alex Roe plays the handsome, moody-looking Liam Page and does an excellent job of going from totally “real-life-clueless” brat to daddy in a series of situations that define his life. Josie is played by Jessica Rothe who brings our love-struck young southern girl into a mature, protective single mother. Another notable character is Pastor Brian – Liam’s father – played by John Benjamin Hickey, who is frequently seen on the small screen in various TV shows. But, the one that totally steals the show is seven-year-old…..going on thirty……Billy! Young actress Abby Ryder Forston is AMAZING as Billy! I was also excited to get to see a glimpse of Travis Tritt as the character “Walt”…..albeit “glimpse” may be an exaggeration – I knew he was in the film and I couldn’t wait to see him (I used to go see him play at the Long Branch – a country music club in Raleigh, NC – and sit on the floor at the foot of the stage whenever he played there – loved him), but his part was very brief and I’m not really sure what it had to do with the story…..it was still great to see him after all these years and he did sing part of a song in his short time on screen!

So…..yeah…..I really enjoyed this movie and highly recommend it for all you romantics out there that just love a good tear-jerker – a great girls-night-out or matinee-and-lunch with the girls kinda movie……and, guys, if you want to win some brownie points, it would be an awesome date-night movie! I rate this one a solid A!!!

And……my Daily Photo Challenge topic that day was #yum!, so I had the perfect shot to use for it: