Yet Another Wild Dream

Oh, yeah……I have some real doozies! My dreams would make for a best seller, for sure…..someday I really should try to publish a collection of them – I just might hit the jackpot! The one I had last night was a real gem……it seemed to last all night (although, I’m sure it was more likely just a flash in real time) and when I woke up, I laid there a few minutes to think about it so I could remember all the details. Here it is:

I was in a strange house cleaning the bathroom. I was holding the tub stopper between my teeth (eeewww, seriously???) while I cleaned the tub. The stopper looked like this one and was about an inch and a half across: 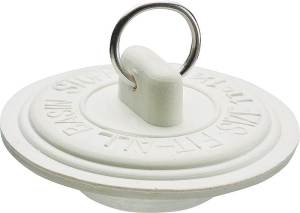 Someone bumped into me and caused the stopper to slide down the back of my throat and lodge just beyond where I could get a hold of it to pull it out. I couldn’t breathe, so I couldn’t cough to try to dislodge it back up where I could get it. So, I went into a bedroom beside the bathroom and found my Mom sleeping. I shook her and she looked up at me…..I put my hands to my throat in the universal signal for choking and stuck my tongue out. She laughed at my silly face and rolled back over to go back to sleep. I shook her again and did the same thing, but she was snoring and wouldn’t wake up. So, I went down stairs to find a bar with lots of people having a party. I, again, did the universal signal for choking and pleaded with them with my eyes and hand gestures to get someone to help me……no one noticed I was there. I went through a set of double doors to find an office area with several cubicles in the center and hard offices around the perimeter. By then, the stopper had moved down my throat a little further, so I could talk and I was a little calmer. I went to the first cubicle I came to and told the girl at the desk that I had a stopper lodged in my throat and needed help – I showed her the bulge in my throat and asked if anyone knew how to do the Heimlich Maneuver. She called to a guy in another cubicle and he came to try it, but the only thing that happened was that I felt the stopper move a little closer to the opening of my throat, but wouldn’t pass through. He tried several times with no success. Then, a woman came out of one of the hard offices – she looked just like an actress I’ve seen many times on guest appearances on TV shows, but I can’t place her – she had a lab coat on and introduced herself as the doctor on call. She seemed a little ditzy for a doctor, though……she giggled and said “eeewww” when I told her the story of how the stopper got in my throat. I tried to tell her that my doctor was in an office upstairs and I’d rather go there, but she ushered me into her office and told me she could help. She looked down my throat and poked at the bulge where the stopper was. She said that the only way to get it was to administer some local anesthesia, make an incision in the front of my throat, and pull it out. I gave her a horrified look and asked why she wouldn’t put me under for surgery of that nature. She assured me that it wasn’t “surgery” because the stopper was right there on the other side of a thin layer of skin and she could do it right there in her office (not an examination room – an office with a desk, book shelves, filing cabinets, etc.) – no problem! So, I asked her when she would do it and she said whenever I was ready. So, of course I left……after all, I just had a tub stopper lodged in my throat, why would I think it was of any urgency…….I got in a van with a bunch of people who acted like they were my friends, but I didn’t recognize any of them. They told me of a great party, but I had to have my birth certificate with me as proof that I went to Albion High School (birth certificate to prove that???), so I had them drop me off at my house so I could get it. I started to go to the party, but I didn’t know the way, so I drove around some back roads and big hills trying to find the address. I suddenly realized that I left the address and the birth certificate on my kitchen counter, but I was so lost that I didn’t know how to get back to the house to get them. I found a party, but knew it wasn’t the right one…..I pulled in, anyway. The first person I saw asked me what that big bulge on the side of my neck was — I discovered that the stopper had moved, again and was now protruding out just under my right ear and I started gasping for breath with loud raspy wheezing like I was having a really, really bad asthma attack. The person told me the doctor was inside, so I went in the house and found that same office area. The lady doctor that was going to help me was standing there in the middle of the cubicles. I gasped and gasped – I couldn’t breathe and couldn’t talk. She said she didn’t expect me back until tomorrow, but since I was there, she’d see if she could fit me in. I stood there gasping and wheezing while she disappeared into the sea of cubicles. I realized she wasn’t coming back……I looked around and there wasn’t anyone else in any of the cubicles and all the hard offices had their doors open with no one inside any of them and all the lights went out – there was just a glow from a couple of computers that were still on that gave enough light for me to know the offices were closed and no one was there! Luckily, I woke up at that point…..all out of breath and my heart pounding like a race horse!!!

Category: Dreams, You've Got To Be Kidding Me!!!!