From time to time I have been known to pick up some really amazing “finds” at various silent auctions I’ve come across. Usually, I know exactly what I am bidding on and what I’m willing to pay for it…..then, I stalk the bid sheet to be sure I make the winning bid – unless, of course, the bidding war puts the bids way above what I am willing to pay. I’ve gotten some lovely things via silent auctions – I rarely pay much, but go for things that will bring me some joy or sentimental attachments! But, in all the times I’ve bid in silent auctions and been successful (or not, as the case may be), I’ve never been surprised or caught off guard by my purchase……until now!

This past weekend, I had a very different experience with a silent auction. During the Sip and Stroll – Albion Wine Walk event on Saturday, the Pullman Memorial Church had a silent auction in the room where the wine tasting was taking place – I believe it was to benefit their new roof fundraising efforts. I was waiting for some of the crowd to thin out at the wine table, so I wandered around looking at photos and displays. I spotted a really cute two seater chair – a love seat / settee type of piece that folded up, like a folding chair and noticed it had a bid sheet on a table beside it. I looked at it and walked away……then, I went back and looked at it, again. I really thought it was cute and something I’d enjoy having – despite that, I didn’t have any intention of bidding on it, but after I walked away a second time, “something” told me to go back for another look. This time I gave in – I just plain liked it and decided to put a bid down. It was early in the event and my first stop on the “stroll”, so I actually assumed there would be more bidders after me and I figured I most likely wouldn’t go back and check. I even forgot that I did it! Then, Sunday afternoon, I got a call from the church letting me know I had the winning bid…….well, I’ll be darned!!! I was a little shocked and my first reaction was “oh, dear, now where will I put it?”!!! I was happy to get it because I remembered the feeling I had when I saw it, but really didn’t think I had many choices of what to do with it if I did have the winning bid! I gave it some thought and pretty much decided that I would put it in one of the bedrooms for extra seating to put on shoes or read or watch TV – you know, it is always nice to have chairs in bedrooms!

So, today I went to pick it up. When I saw it, I felt that warm feeling, again – I really did like this piece and it was actually cuter than I remembered it was! Bill Lattin, our County Historian, helped me put it in my car. As he did that, he told me a little about the chair. It turns out, it is one of the ORIGINAL pieces of furniture for the church when George Pullman, of Pullman sleeper-railroad car fame, built and furnished the Pullman Memorial Universalist Church in 1894 in Albion in honor of his parents and the community where he lived as a boy. WOW!!!! My heart swelled and I got a few tears in my eyes! I couldn’t believe it! It actually took me a few minutes after I got in the car and drove away for it all to sink in! My love for the chair grew exponentially — I felt a sense of pride I don’t usually feel for inanimate objects – with the exception of my grandmother’s china closet and my grandfather’s mantle clock – both of which are among my very most prized possessions! Now, I can add what I have decided to call “my George Pullman chair” to that list! It suddenly seemed totally inappropriate to put it in a bedroom where most people coming into my home would never see it! It belonged out where it can be an interesting conversation piece and something I can show off and brag about! I decided that my dining room – along side my other sentimental treasures – was the perfect location for it!

According to Bill Lattin, this was one of about 60 chairs purchased by Pullman for the church to be used in the large Lecture Room – a room used for lectures, community meetings, large Sunday School classes, etc. Double folding chairs were common during this period for use wherever folding chairs were most practical, but not usually as ornate as this one is – one with this type of detail were typical of a church or organization of substantial wealth. 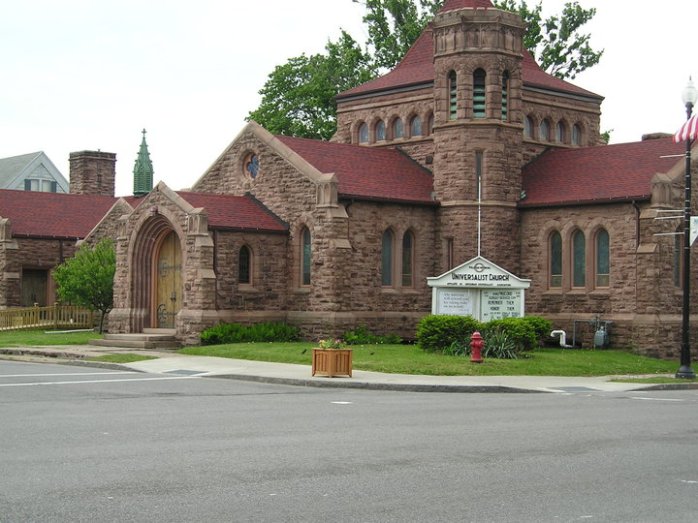 Pullman Memorial Universalist Church – built in 1894 (dedicated in 1895) by George M. Pullman in honor of his parents 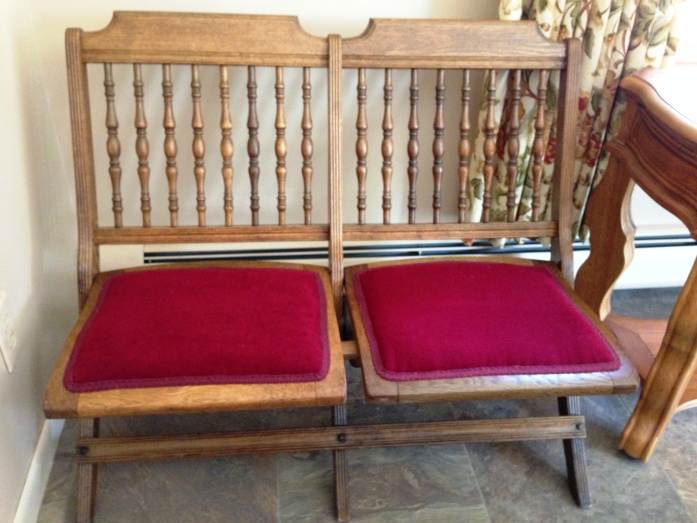 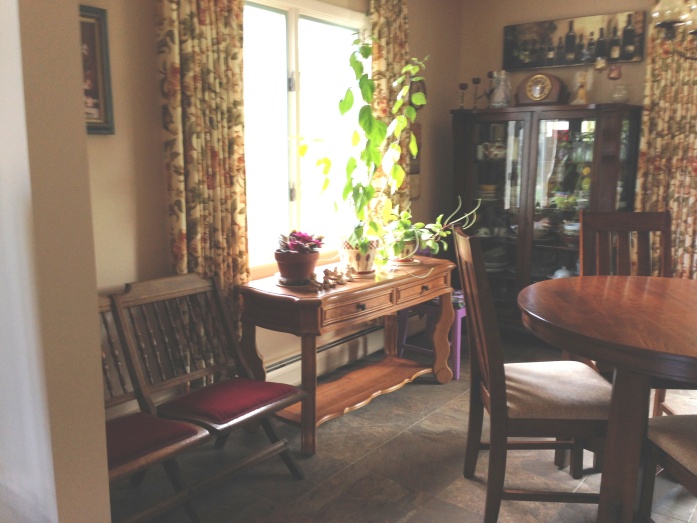 Located in its new home – my dining room!

On the other end of the library table is the purple chair I obtained in another silent auction – the Swan Library chair auction at the 2013 Strawberry Festival – we used this at the Class of 1974 Memorial Tree Dedication due to the purple color. Two unique chairs with special “sentimental” significance for me!

I am so happy and proud of my new acquisition!!! I can not believe how lucky I was to find it and give in to the impulse to bid on it! I will cherish it and enjoy it for years to come!