I traveled to Cooperstown, NY this past week – mainly to visit the Baseball Hall of Fame, but I discovered so much more! Cooperstown is a lovely little village on Lake Otsego in the foothills of the northern Catskill Mountains. I have never been to that area of NY state – I’ve been to the Adirondacks, but never the Catskills area. It was a real treat! The surrounding area is beautiful and the village of Cooperstown is like driving into a town that time forgot……beautifully maintained Victorian homes, a pristine lake, quaint little parks, friendly people – didn’t run into a single rude or unkind person anywhere I went, no big chain stores or restaurants, and tons of history everywhere you look. I have visited a lot of places that I really enjoyed – places that are wonderful to visit, but I wouldn’t want to actually live there! Until now, there has only been one place I’ve ever visited that I felt like “I could live here”……now, there are two: Savannah, GA and Cooperstown, NY!

My adventure was filled with “firsts” for me! I already mentioned it was the first time I visited the Catskills area of NY and, obviously, the first time I was in Cooperstown. But, there were other firsts, as well. I started out on my drive at 5:00 am on Monday morning – taking the scenic route – the first time I’ve driven so far on the beautiful Route 20 – and expected to arrive in Cooperstown by lunch time, which allowed for some sightseeing stops along the way. I arrived in Cooperstown ten hours later – the first time I’ve allowed myself to truly just take my time and soak up all the wonderful sights and places our great state has to offer! I’ve never had the luxury of no set agenda or time line expectations and the ability to just decide to stay extra days, if I wanted to – which I did, actually! 🙂 So, the first day of my adventure was packed with mini adventures throughout the day. I stayed at a lovely bed and breakfast inn – another first for me – I’ve always wanted to stay at a B&B, but never had the pleasure – until now! And, it is the first time I felt like an adventure really needed to be broken down into four blog posts to give each segment of the adventure the attention it deserved! Oh, there have been times when I broke out a piece of an adventure into a separate post so that it would stand alone, but this time was different – I felt like I didn’t have one BIG adventure, I had FOUR big adventures!!! So, you will find four blog posts covering the main segments of the trip – Bed and Breakfast, Taking the Scenic Route, National Baseball Hall of Fame and Museum, and this one – Cooperstown Adventure! I spend three short days traveling and crammed a multitude of amazing memories into them! So, scroll down or look at the “Recent Posts” list to the right to find the other three posts to read about my entire experience!

Here are just a few photos of the things I saw and did in Cooperstown – other then the National Baseball Hall of Fame (which has its own post):

My first view of Cooperstown was this main intersection of Rt 80 and Main Street. The village was beautifully decorated with corn husks, straw bails, and fall flowers…..and the trees were a blaze with gorgeous fall colors. The couple standing on the corner made me chuckle – they were taking turns having their photo taken with the colorful tree in the background and an orange leaf in each hand! I wondered where they came from that the fall colors would be such a novelty for them.

It was a lovely day – just cool enough to be comfortable walking downtown, but warm enough to not need a jacket. I checked in at the Bed and Breakfast Inn and took a stroll down Main Street to check out the village. I wasn’t surprised to find a distinct baseball theme to the shops and restaurants downtown. 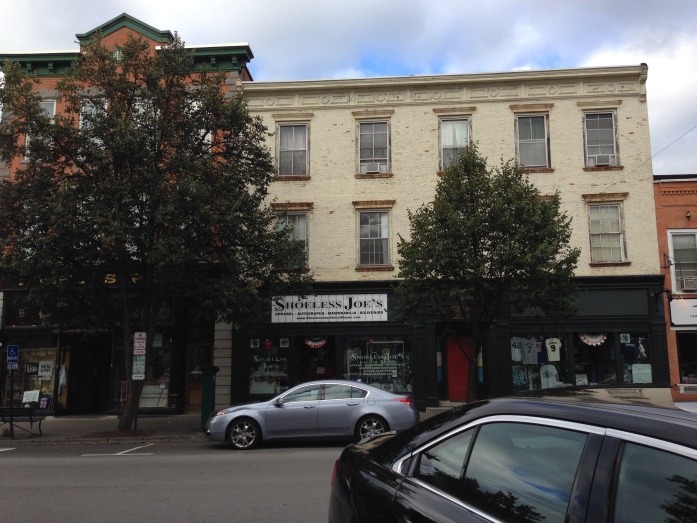 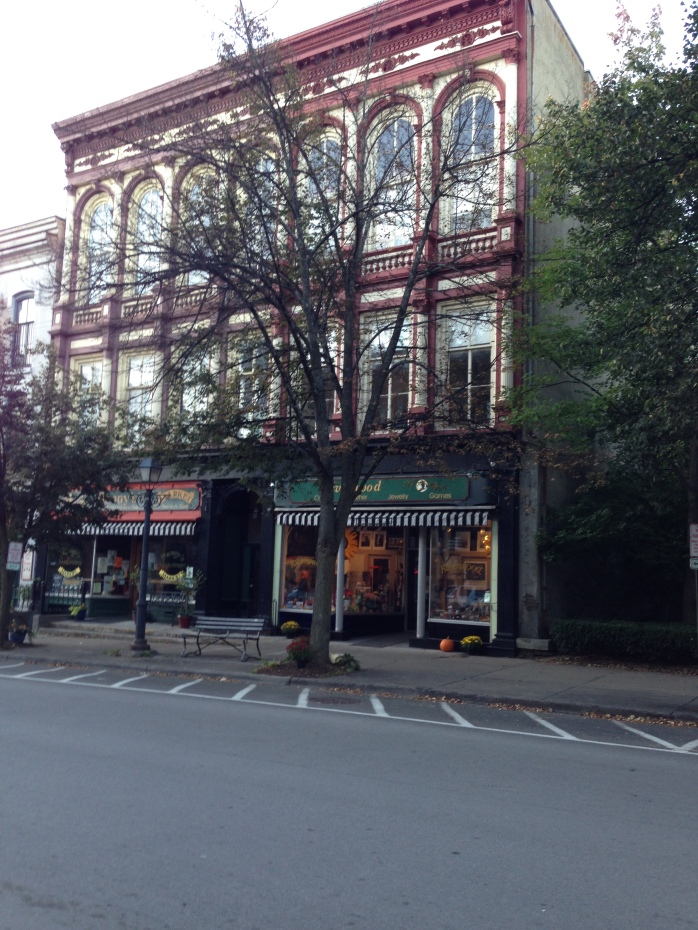 Another example of the village ambiance 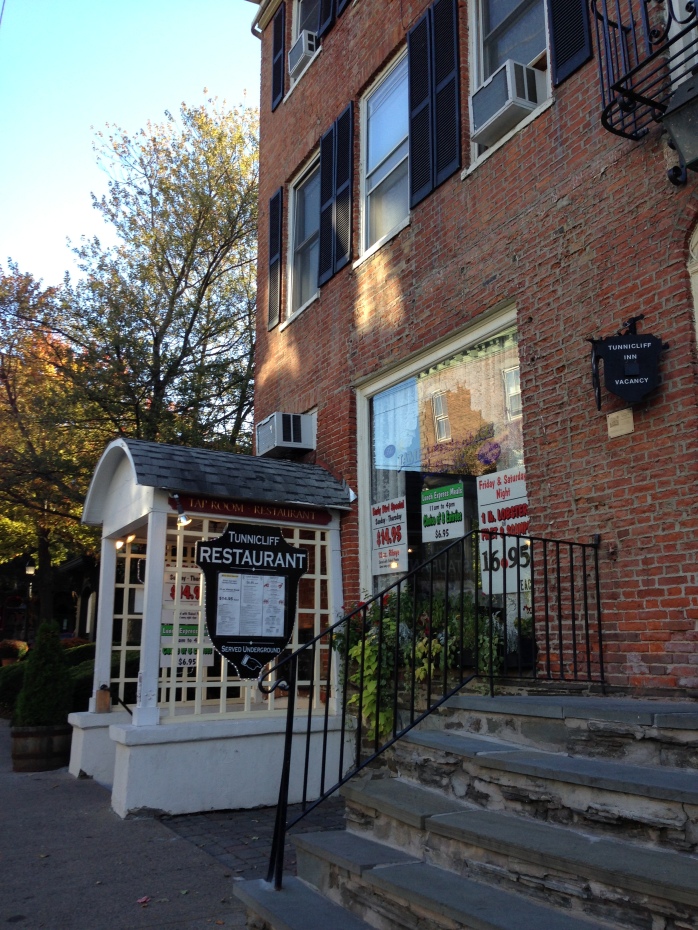 The first evening, I had dinner at a restaurant that came up several times in my research – Alex & Ika Restaurant – it wasn’t anything special. But, the second night, I accidentally came up on this restaurant while driving around town. It is The Pit Under the Tunnicliff! The Colonial brick building is the Tunnicliff Hotel – The Pit, down the stairs to the basement, is a very eclectic pub with delicious food – I really enjoyed it!

Then, there is the pristine Otsego Lake – a large crystal clear, vivid blue lake that borders the town and out along Rt 80 – breathtaking!!! This is a small park one block over from the Baseball Hall of Fame with an historic marker indicating it was an Indian Meeting Place. 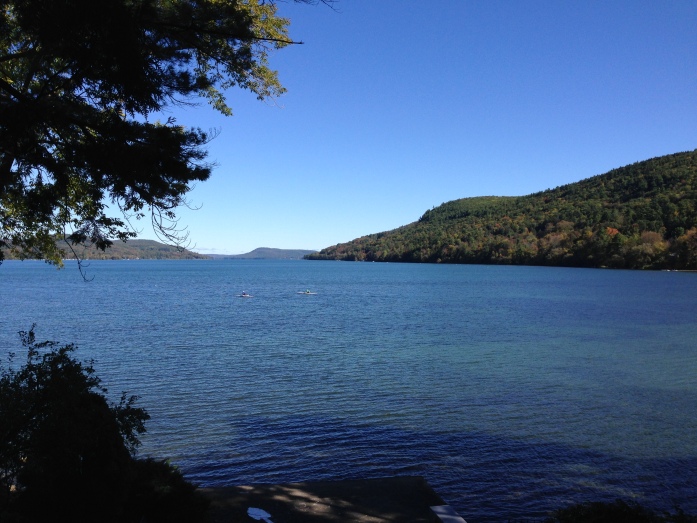 And, yes, much to my delight, there is a lighthouse!!!

Downtown is also home of Doubleday Field – the birthplace of baseball! 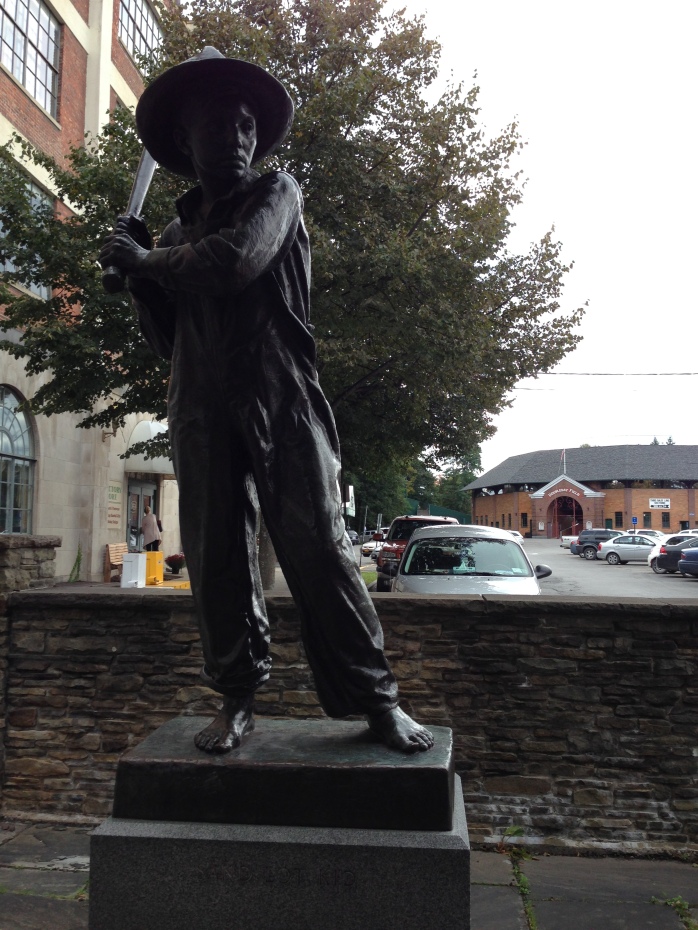 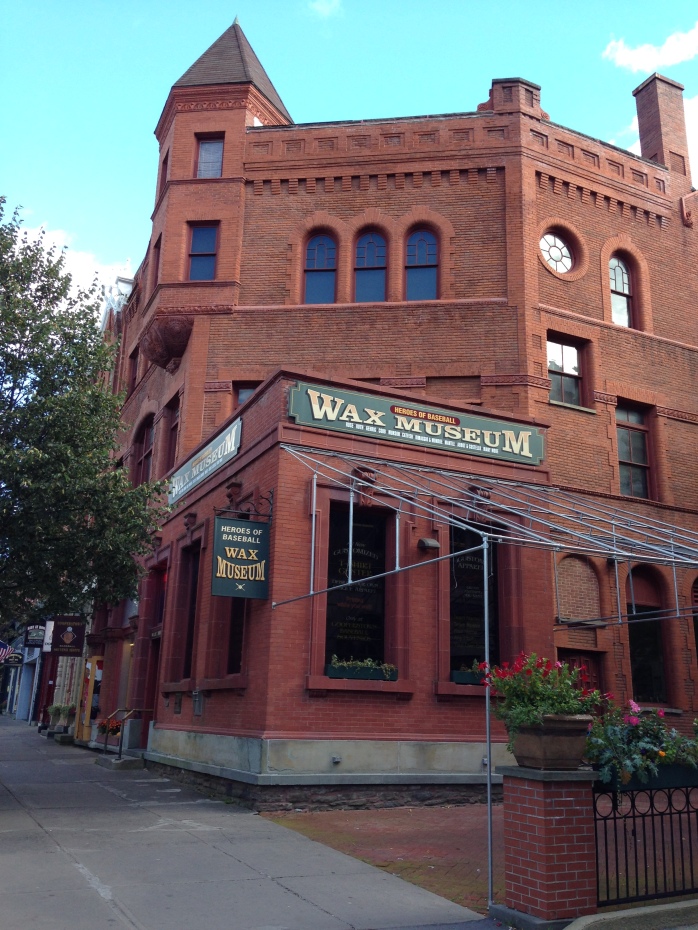 In this large corner building is the Heroes of Baseball Wax Museum — the ground floor is a baseball memorabilia shop and the second and third floors are home to more than 40 wax figures and “The Baseball Bloopers Movie Theater” – what a riot that was – I laughed and laughed!!! The following two photos are just examples of a couple of the more entertaining figures: Wade Boggs on a horse with a cop and Abbott & Costello, which was accompanied by a recording of their “Who’s on First” skit — great fun – it never gets old!!! 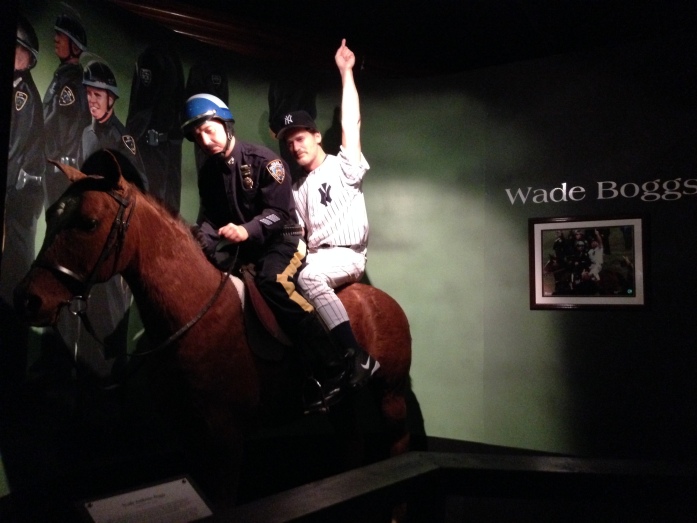 The other two major museums in Cooperstown – just a mile from downtown: The Fenimore Art Museum – an elegant folk art museum sitting on the banks of the Otsego Lake and the Farmer’s Museum – a recreation of an 1800s village and working farm.

Following are a few photos from the Fenimore, including examples from the Native American Indian exhibit called “Splendidly Dressed” and shots from the patio where I enjoyed a light lunch and glass of wine overlooking Otsego Lake. 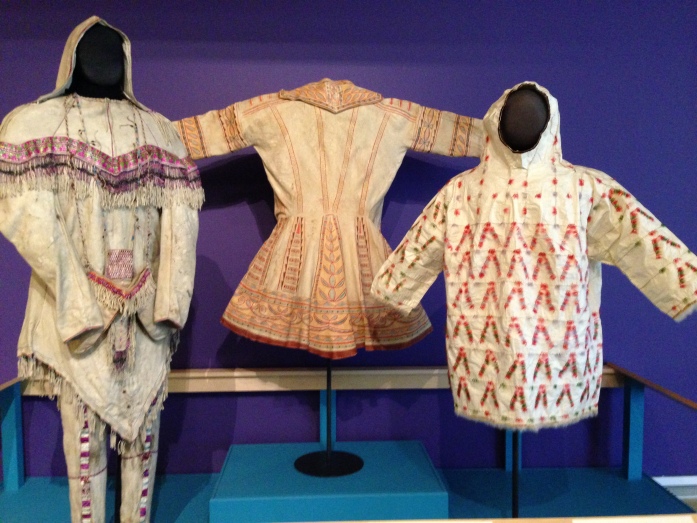 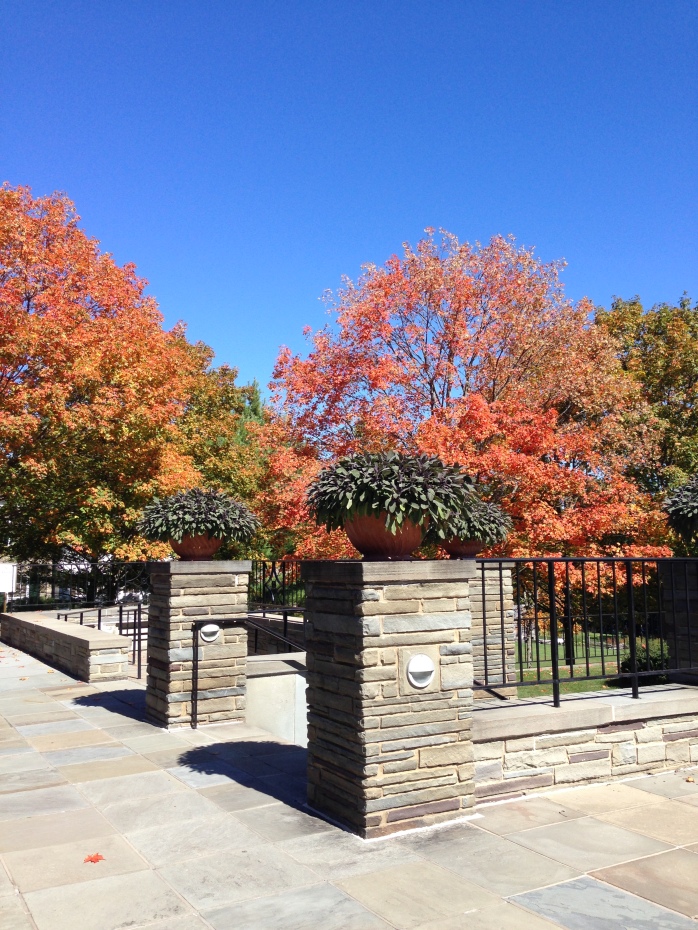 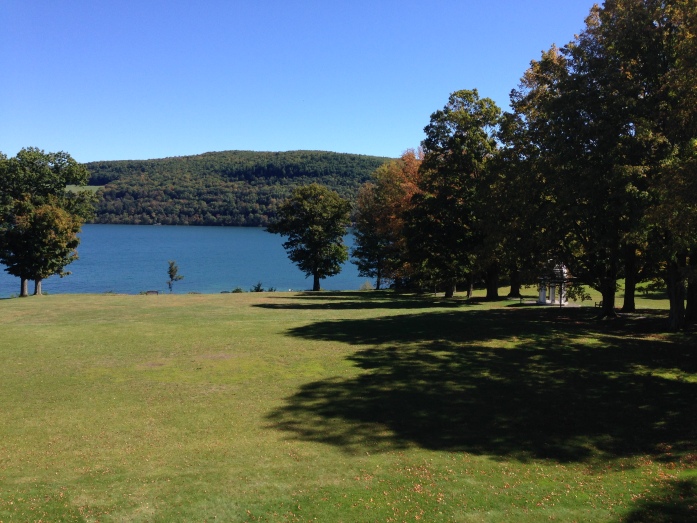 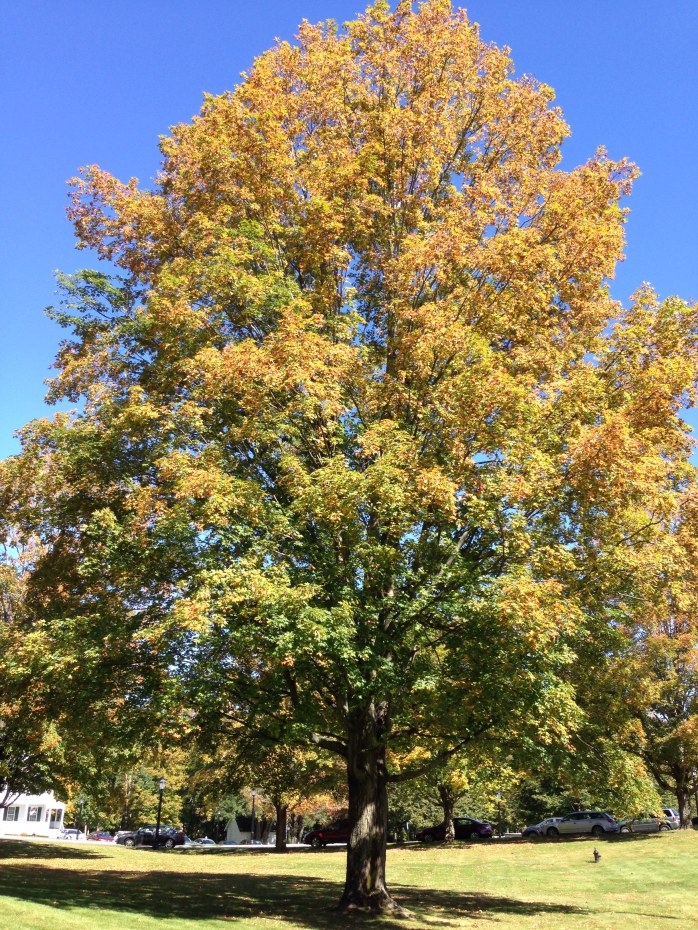 I particularly enjoyed the Farmer’s Museum, which is located across the street from the Fenimore — fascinating!!!

This is the main barn and entrance to the museum. The main barn is home to an exhibit of pick up trucks (work trucks) through the years – including this one:

The first thing you come to after leaving the main barn is the Empire State Carousel — a hand crafted carousel that highlights NY State with names of many of the small towns, points of interest, and interesting facts. The animals are not your typical carousel animals – they are all the different animals that can be found in NY State. Very cool – you know I love a carousel!!! 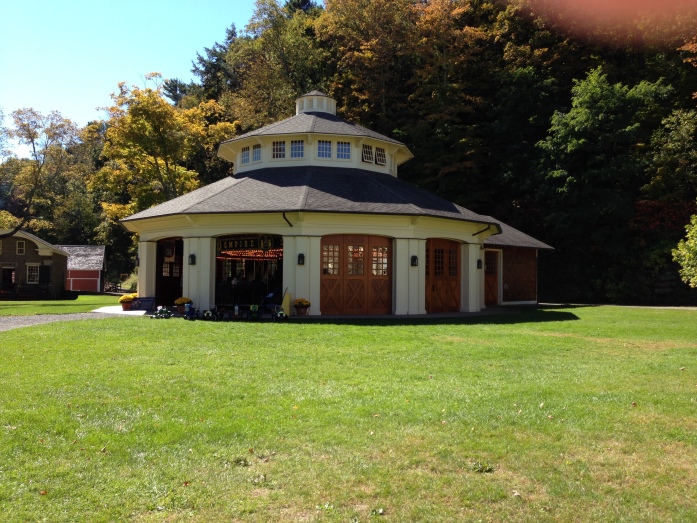 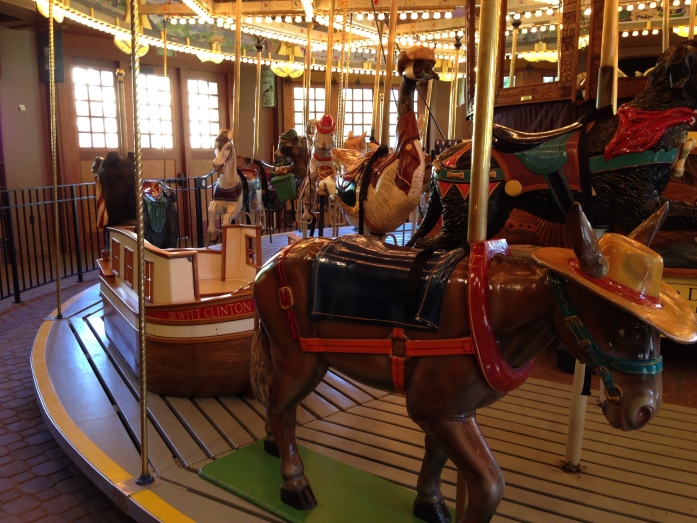 The 1840s village consists of buildings that were actually in use in nearby towns in the 1800s and moved here to recreate the vintage community. There are people in many of the buildings dressed in period costume and performing typical tasks of the time – they were happy to explain what they were doing and some history around the task. 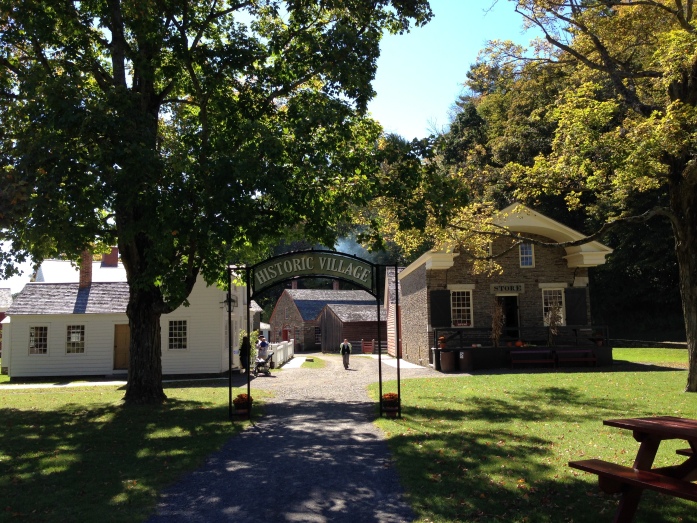 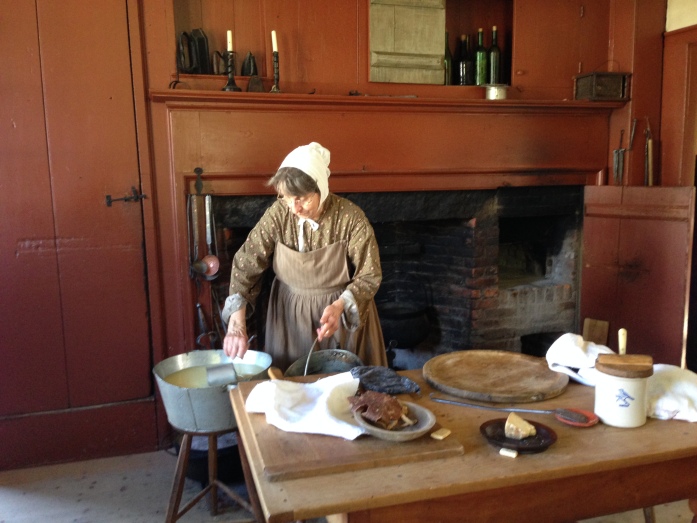 So, that was my adventure in Cooperstown……one I’ll never forget! It was educational, enjoyable, and so very special! So glad I made the trip!