I’ve had some interesting adventures in the past week or so.  One adventure took me by surprise and I learned about something I was totally unaware, while another adventure introduced me to a haunted mansion and delicious new wines, and yet another resulted in a peaceful outing, a great meal, and some lovely “finds”.  All were interesting, fun, and left me with mementos of the experiences – in one form or another.

I’ll start with the first and, frankly, most memorable of the adventures.  A few weeks ago I was checking out the website for a local winery I had heard a lot about – Leonard Oakes Estate Winery – I tasted some of their wines at the Lawn and Garden Show at the Fair Grounds this summer and really liked them.  Their home page had an advertisement for an event they were having on September 1st – a Steampunk Festival.  The poster listed features such as jewelry and craft vendors, live music, food trucks, and some odd, but fun, sounding competitions and games.  I thought the name of the festival was odd, but it sounded interesting and a great way to check out the winery.   So, on the first, I decided to pop in and wander around to see what it was all about.  Well…….I quickly realized I had no idea what I was getting myself into!  The people attending the festival were dressed in costumes – sort of like the old west or old England with a fantasy twist – top hats, faerie wings, pub wench outfits, Lewis and Clark type explorer garb, goggles, etc.  And LOTS of big beards, artistic goatees, and handle bar mustaches!!!  LOTS – even some of the women had them!  I wondered what alternate universe I had stepped into!  I wandered around and listened to the band play – they were very good, by the way – but, I felt about as out-of-place as a virgin in a whorehouse and I felt like everyone else was gawking at me more than I was gawking at them!  haha  So, I didn’t stay long.  I realized that the term “Steampunk” must have had some specific meaning.  Since I have never heard of it before, I did what I should have done before I went —- I googled it!!!  Apparently, it is a futuristic/fantasy genre that became popular in the 80’s and 90’s and is still growing.  The more I read about it, I realized I’ve seen previews of several movies with this type of theme – old steamer ships flying through the air with people dressed in old English attire – not generally my taste in films, but I know they were hugely popular.  The Batavia Daily News Online did a story on the festival a few days later and one of the quotes was “Its the Victorian Era meets the future.”  I guess that sums it up!  I did enjoy wandering through the festival – even though I was definitely the odd duck there – and I was happy to experience and learn about something new.  The following photos are:  The event poster, a photo I found online that shows the typical Steampunk costume, and three photos that were included in the Batavia Daily News Online article – I didn’t take any photos, myself — I didn’t want to look any more out-of-place than I already felt – the odd duck taking pictures of the locals!  {smile} 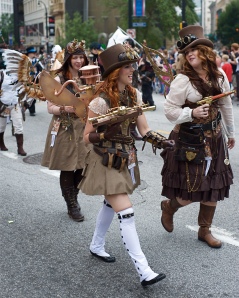 Leonard Oakes Estate Winery is just up the Ridge from here a little way — maybe 15 minutes or so from my house.  So, I wasn’t too far away when I left.  It was still early and it was a glorious evening – warm and sunny, so I had the top down on the pony.  I decided to take a leisurely drive north through Lyndonville and pick up Route 18 to Point Breeze to watch the sun set over the lake.  And what a gorgeous sunset it was — an amazing ending to the day!  I sat there watching people fishing and the boats coming in and just enjoying the incredible sun set!  What a treat! 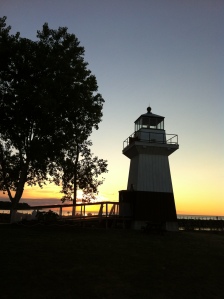 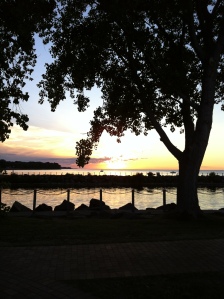 My next adventure was yesterday and involved another local winery.  One of the items on my “places to go and things to do” list was to visit The Winery at Marjim Manor.  Marjim Manor is a historic home that has been a residence, a farm, a retreat and camp run by nuns, and now a winery, as well as the owner’s current residence.  It is also famous for the spirits that reside there — and I don’t mean the wine!  The house is haunted!  It has been featured on the TV series Ghost Hunters and Most Terrifying Places in America, seen on the Travel Channel.  Here is a short clip from Youtube and the photo I took of the front of the house while I was there.

So, I got up yesterday morning and decided to take a road trip to visit Marjim Manor, which is about a 45 minute drive from here.  I also decided that, since I would be so close to Olcott Beach, my trip would include shopping on the boardwalk at Olcott.  It was a dreary day, but I didn’t care – I would make my own sunshine, take an umbrella, and hope that it would clear up as the day progressed.  Well……I got about 15 minutes or so down Route 18 and the wind started kicking up BAD and the rain turned into a driving rain that made it difficult to drive!  I considered turning around and heading back home, but – you know me – I was determined, so I kept driving.  The weather got scary – there were trees and limbs down, lots of debris in the road, and the wind had taken someone’s large trampoline and threw it against a telephone pole – I saw it wrapped around the pole a ways down the road from the nearest house!  Just past where you would turn south to go to Lyndonville, there were firemen, police, and a bucket loader clearing a large tree and associated debris from the road.  But, I kept going — I was sure it would clear up and all would be fine.  I was right!  By the time I reached Marjim Manor, the sun was peeking out and it had stopped raining.  I went in and purchased the $5 tasting package – taste 4 wines, a keepsake wine glass, and 10% off any purchase.  I listened intently as the fun and knowledgeable staff described each of their featured wines.  I picked two that peaked my interest to taste and then asked the staff for two other recommendations.  I thoroughly enjoyed all four wines I tasted and wished I could have tasted them all.  I purchased three bottles – a sweet white wine called One Hundred Windows (named for the 100 windows in the house) , a medium red wine (with a blush color) called Spring Lake Stuben, and a red wine called A Gift From The Vine – all award-winning wines with amazing flavors.  I also purchased tickets to an upcoming Ghost Hunt event being held at the manor in October.  I hope to take my brother and his wife for my brother’s birthday — should be fun!

I left Marjim Manor and headed to Olcott Beach.  Unfortunately, only one shop was open – I thought it was due to the weather, but later discovered it was because I was too early – the shoppes don’t open until noon.  It was a little chilly and very damp, so I looked through the one shop, found a couple nice pins, and headed back home.  I got home in time to whip up a batch of baked macaroni and cheese to take to the pot luck family dinner at the church to wrap up the day.  Here are a couple of photos I took at Olcott showing how rough the lake was and how dark and damp the day was.  But, I still enjoyed myself – it was a great day – I discovered a unique winery, tasted some amazing wines, and it is always a great pleasure to be near the lake, no matter what the weather is!

So, that brings us to today — the third of the big adventures!  I got up and went to church – it was a lovely service – we had a farewell reception for a gentleman who has been a life long member of our church for almost 93 years and is moving away to be near his children.  It was also the first day of Sunday School – the adult class I joined is reading and discussing 90 Minutes in Heaven by Don Piper.  After church, I decided to go back to Olcott Beach to finish the shopping I had planned to do yesterday, but the weather kinda put a wrench in that plan.  Today was a much nicer day!  The warm sun mixed perfectly with the cool breeze coming off the lake.  The lake was calm and the sky was beautiful!  And the shoppes were all open!!!  I strolled through the shoppes and found a gorgeous handmade necklace and earring set from VacantiArts and a pretty stone ring at another shop.  I sat on the boardwalk looking out onto the lake and watching the boats for a while – just loving being near the water.  Then, I went to Mariner’s Landing for a late lunch/early dinner.  I had a shrimp cocktail, which was perfect – the shrimp were huge and plump and delicious!  I also had a very nice salad and they brought me a small loaf of fresh, hot bread that was so dense and yeasty – YUM!  For my entrée I chose the broiled scallops with mashed potatoes.  If a chef is not careful, they can ruin scallops in a split second — just a hair too long on the heat and they can be rubbery and chewy!  These were done to perfection — amazing and scrumptious!!!  I strolled around a little longer and then headed back home, where I curled up with the girls for a little nap!  Another absolutely perfect day!  Here are some photos I took today to show the contrast of the two days – what a difference a day makes! 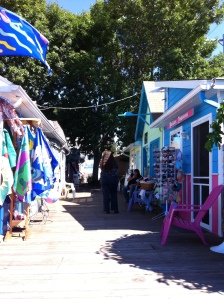 Next adventure on the horizon — this Tuesday I will be headed to Letchworth State Park to have lunch at the Glen Iris Inn with some ladies from the church.  I can’t wait — I plan to go early so that I can explore a little and take in the beautiful Genessee River Gorge and maybe wander through the museum after lunch.  I’ll write all about my experience afterwards – stay tuned!