I saw the new Julia Roberts movie – Eat Pray Love – a couple of weeks ago on the 14th.  I got side tracked and didn’t write a review the day I saw it and then went out of town for a couple of weeks, so I am a little late getting my thoughts about it on here…….but, you know what they say – Better late than never!  So, here I am with an attempt to make amends and write my review.

Eat Pray Love is the story of real life American writer, Elizabeth Gilbert, and is based on her 2006 memoir.  Gilbert is a 32-year-old writer who is unhappy in her marriage, so she initiates a contested divorce, has an affair with a younger man, and after all that still doesn’t find her the happiness she craves, she takes a year to travel across Italy, India, and Bali to find herself.   She spends 4 months in each location — first, Italy to find pure pleasure in food and eating it;  second, India to find joy through prayer;  and third, to Bali to seek out inner peace, but ends up finding true love in the process.

Watching her journey was a pleasure.  In each 4 month stay, she made friends that helped her find what she was searching for and had adventures that brought her joy and fulfillment.  I personally enjoyed the Italy and Bali segments, but found the India segments to be a little slow and boring.  I think I would like to read the book because the movie gave me just enough of a taste to peak my interest and curiosity, but not enough to convince me that she got everything she was looking for in her year-long quest.

Julia Roberts does her usual charming job portraying her character.  Other characters of note include Richard Jenkins, who plays Richard from Texas, a fellow traveler in India seeking peace from the loss of his family due to (I believe) alcoholism.  Jenkins always impresses me in his roles – he is a natural actor who makes you want to love and believe his characters.  Javier Bardem is Felipe, the hunky Brazilian businessman that Julia finds true love with in Bali.  Bardem is irresistible and lovable in this role.  I was totally taken in by him!  BUT — I was absolutely 100% confident that he was also the guy who played Izzy Stevens’ love interest in Grey’s Anatomy – the one who was a heart patient and died!!!  I was shocked to find out it is NOT him — the Grey’s character was played by Jeffrey Dean Morgan, which I knew — this actor is Javier Bardem!  But they look so much alike — I mean, like REALLY so much alike!  When I saw a different name on the cast list for the movie, I had to go searching to find out if I remembered the name of the Grey’s guy wrong or what!!!  I found that others obviously had the same confusion, because I found a comparison photo – here they are with Bardem on the left and Morgan on the right – long-lost twins, for sure: 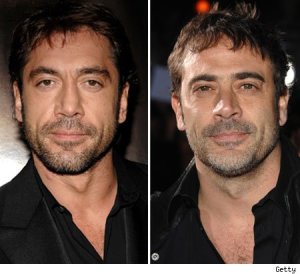 So — bottom line — I liked this movie.  I felt like they left some important stuff out, but until I read the book, I won’t know what that was.  So, it did leave me wanting more and feeling like I was missing something.  But, that is usually the case with any film that is made from a book — they can’t put it all in a 1.5-2 hour movie……..  It was a typical “newly divorced woman needs to go to some exotic place to find herself” type of story, but it was told well and had some very interesting characters and relationships to help it along.  I rate it a solid B+ and recommend it to anyone who likes these types of stories.