Today was such a fun day……and the absolute perfect weather day for it!!! A friend and I got in the car and took off this morning to participate in a Farm Market Hop event at six local farm markets! The way it worked was that at whichever location you decided to stop first, you bought a $5.00 market basket…..then, at each location (including that first one) you got some fresh produce to put in the basket! Also, if you visited all six locations and got the tag on your basket stamped at each one, you were entered into the grand prize drawing!!! WOW!!!

It was so good to see every market full of people – most participating in the Hop! It appeared to be an awesome turn out for their first event of this kind! And, it made me really happy to hear people saying it was the first time they visited some of the markets and that they’d definitely be back!!! 🙂 Always good to get new customers into your market to show them all the wonderful things you have to offer!

And, we ran into several other friends “hopping” the day away, too, at almost every stop!

So – here is how our day went and the order we decided to do our visits……and, of course, photos to document it! hehehe

We drove out to the Rez for gas, so it was only logical that we make Robert’s our first stop……also, Robert’s isn’t open on Sunday, so we wanted to get that one done early in case we couldn’t get to them all today and had to finish up the Hop tomorrow! So, we picked up our basket there and the fresh produce added to the basket by Robert’s was an HERB……the pot I got was dill, since I don’t generally use dill on things and didn’t want it to go to waste, I gave it to my friend, who did the driving for the day! But…..I forgot to get a photo of the dill, so it isn’t included in the photo of all the stuff I got that will be at the end of this post!

This caught my eye at Robert’s and made me laugh……I think I need a t-shirt that says this!!! LOL

At Navarra’s we added SQUASH to our basket – we could choose from summer squash, zucchini, or one of each! I got two summer squash cause it’s my favorite!

Can’t go to Navarra’s without saying hello to Arnie and giving him a little scratch on the snout! 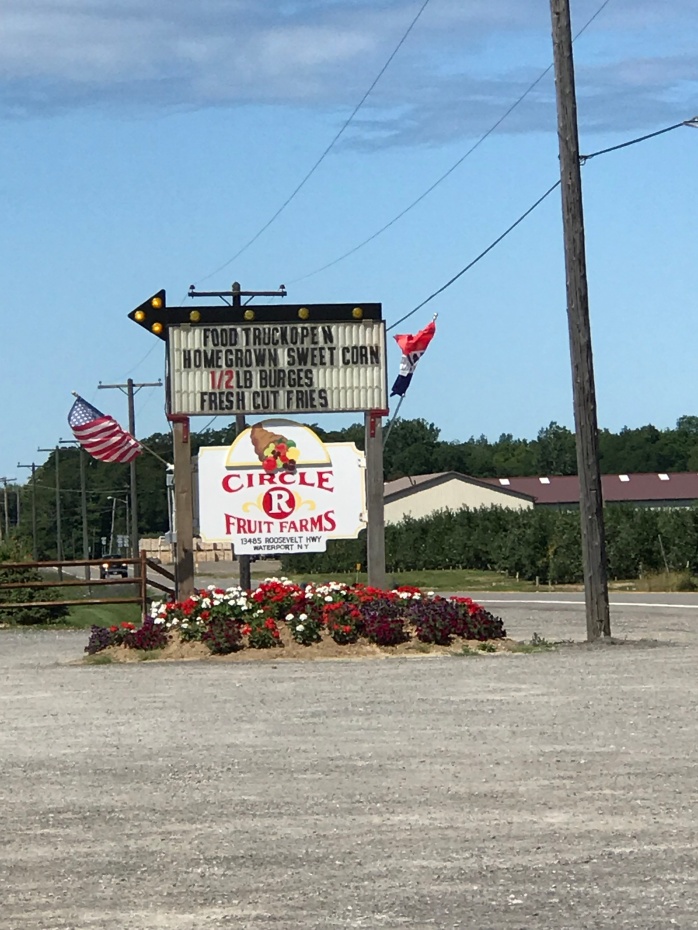 At Circle R, the produce for the Hop was CUCUMBERS, but they ran out — WOW — they really had an awesome response to their event! So, they gave us the option of either five pickle cukes or five ears of corn or a combo……I chose three pickle cukes and two corn – YUM! We timed our stops so that we’d be at Circle R for lunch at their food truck, too! 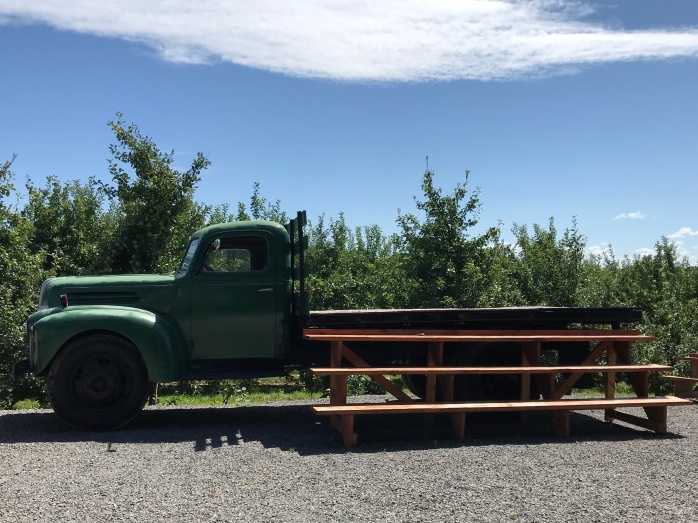 I had the bacon burger…… 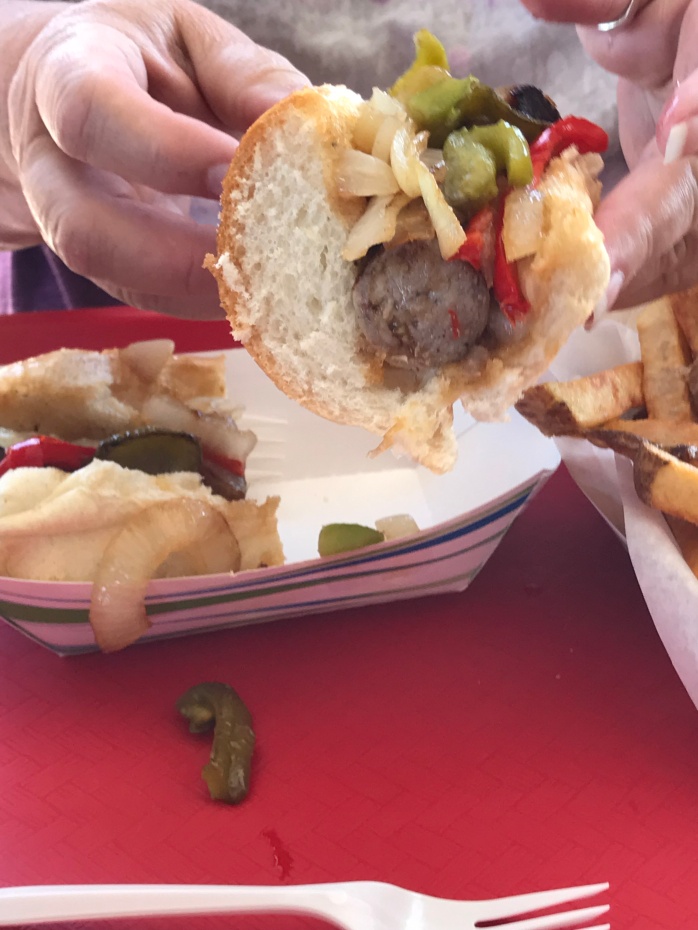 My friend had the sausage with peppers and onions and fresh cut fries! 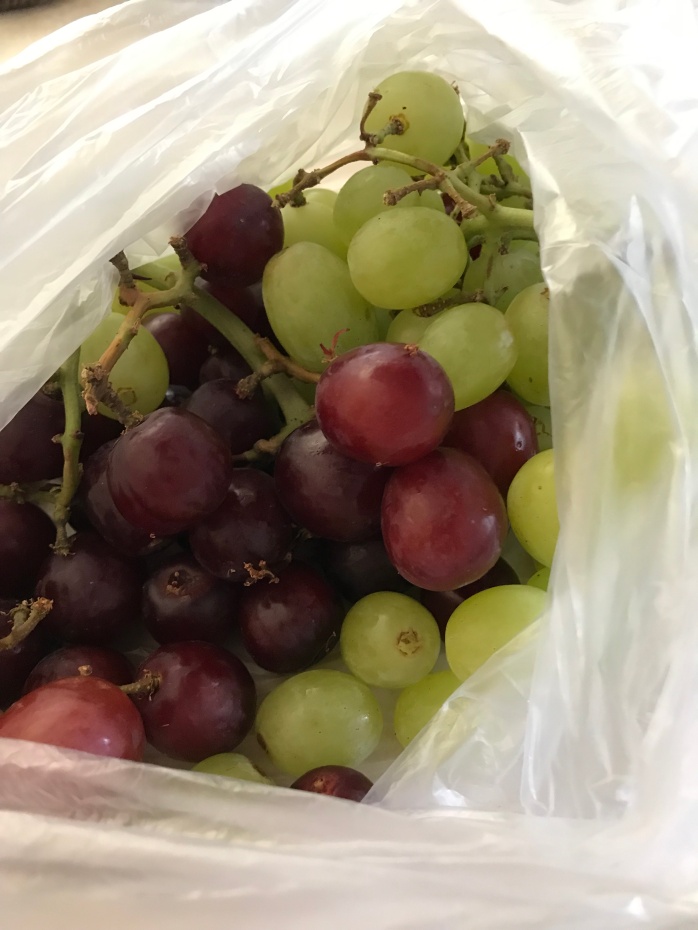 I also bought a basket of grapes — I love Circle R’s grapes and always grab a mixed basket of them when I go there!

Partyka’s added SIX EARS OF CORN to our baskets! Wish I had known that – I probably would have just chosen all pickle cukes at Circle R, but……corn is an absolute favorite this time of year, so I will definitely eat it all or freeze some! No complaint, here!!! 🙂

This cow and pig were a big hit — so adorable!!!

These old boots caught my eye, too……I planted succulents in my childhood tap shoes, so this made me smile!

Brightly’s offered the coolest cabbage I’ve ever seen for our baskets – SWEETHEART CABBAGE!!! I have never seen this kind of cabbage before – I looked it up when I got home and discovered that the leaves are a bit looser than the usual round headed cabbage and are somewhat sweeter in taste!!! Can’t wait to cut into this and eat it up……but, then again, I kinda don’t want to cut into it cause it’s so stinking cute!!! 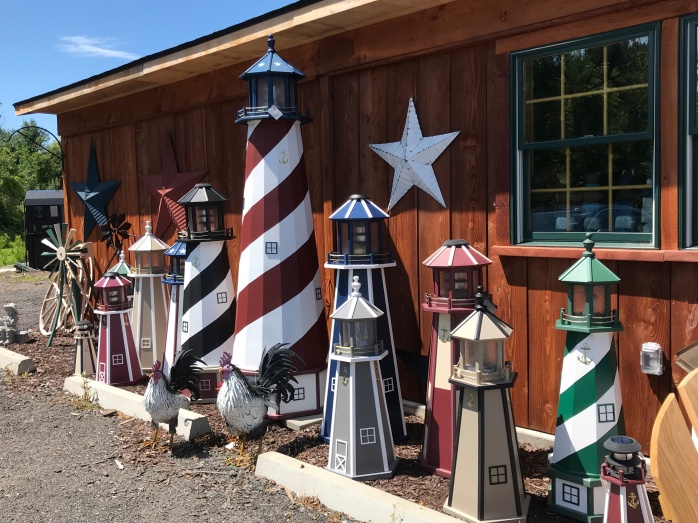 Brightly’s is a lighthouse fanatic’s dream!!!

I resisted the lighthouses, but did give in and buy this adorable rain gauge! My old rain gauge broke a couple years ago and I’ve been looking for just the right one ever since…..and there it was……so, now it is mine!!! 🙂

Kirby’s added PEACHES to our basket…..this made me very happy cause their original offering was beets, but they ran out…..I don’t particularly care for beets unless they are tiny pickled ones, but I had planned to take them out to my brother, who loves them! So, either way would have been fine…….but, I’m super excited to have my first fresh peaches of the season!!! 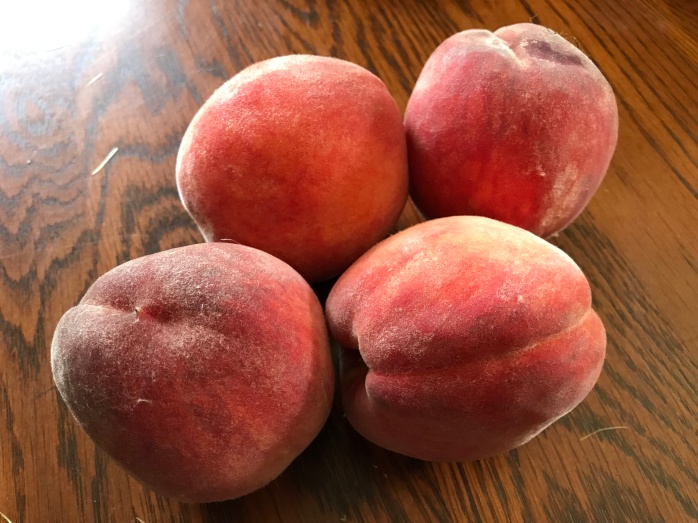 We are so very blessed to live in an area well known for our amazing local farmers and farm markets…….we have access to some of the best fresh produce in the entire country right here…..something I missed terribly when I lived in North Carolina – the produce there is just different and can’t compare to what we have here! I had planned to purchase extra stuff from each stop, but when I saw what we were getting as part of our Hop Basket, I knew I had to control myself……I can only eat so much produce before it goes bad! But……that was today…..in a few days I’ll need more and I saw several things at every stop that I plan to go back and get as soon as I finish off what I have now!!! Peaches are just getting started and as soon as the freestone ones are out, I’ll be buying a LOT of them……and, I’m thinking I just may need some more of that sweetheart cabbage, too……and so much more!!! I thank the good Lord for our farmers and the wonderful fruits of their labor…….and was so happy to participate in their first annual Market Hop……I hope they do it again – maybe in different seasons!

So…….you saw the individual offerings from each stop, but here it is all together in one shot……what an amazing basket of treasure!!! I’ll eat good and healthy for the next few days, for sure!!!

Thank you, Partyka’s, Navarra’s, Kirby’s, Brightly’s, Circle R, and Robert’s……..it was a fun day……and the goodies were just the icing on the cake!!!