As you can probably tell by the previous posts, a huge part of our Most Excellent Adventure was South Dakota. We were in the state a little over a week and spent five days just in the Rapid City area. So, we saw a LOT of stuff in that time. This post will rap up our time in SD and will focus on Custer State Park, the Crazy Horse Monument, Mount Rushmore, and Keystone.

Keystone is another old gold rush town that was built in a gulch. Now, it is mostly touristy shops, but we stopped to have lunch there and spent some time shopping and hanging out. 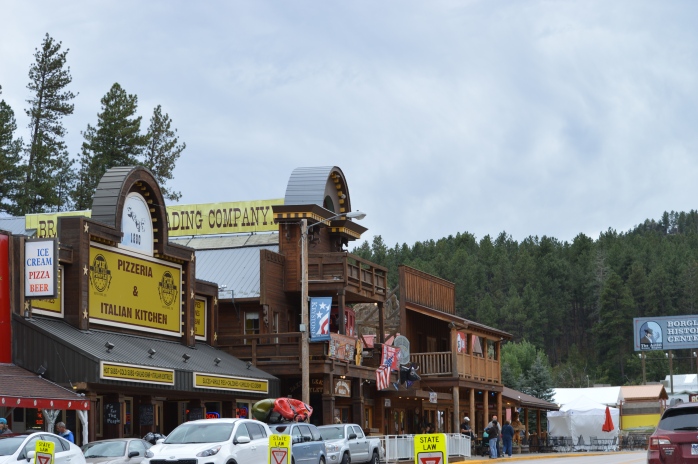 Kevin, Lylace, and Donna leaving the Keystone Mercantile with their goodies! 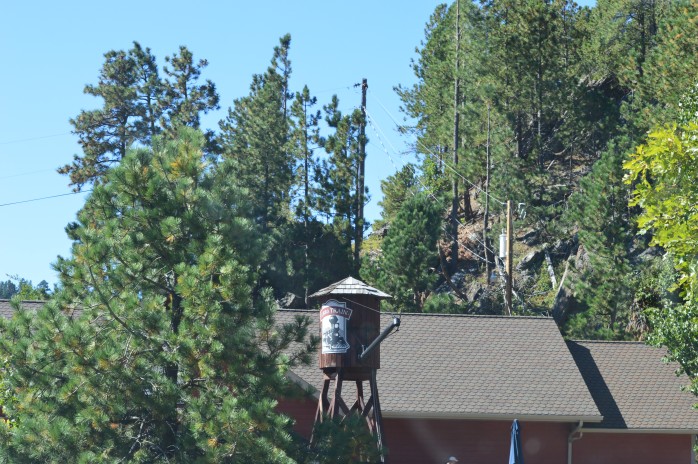 Custer State Park was amazing! We spent a couple hours at the end of one day exploring a little and then went back and spent the better part of a whole day just driving through it and enjoying the beauty and the wildlife! 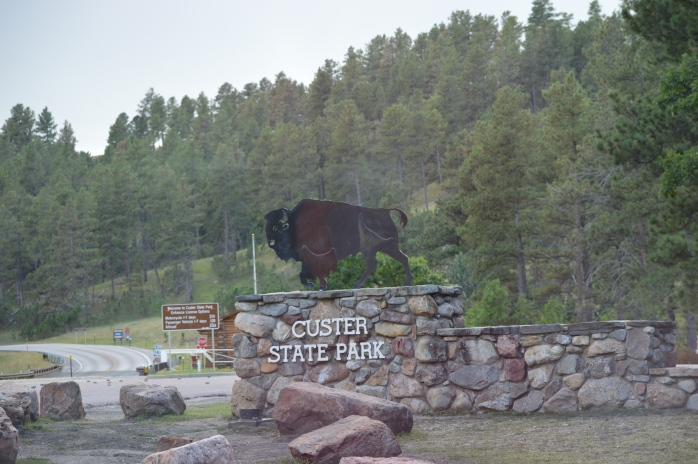 On our full day there, we ran into this classic car club just about everywhere we stopped – sometimes we were following them and sometimes they were following us! This is just a few of the cars that traveled around together throughout the day. 🙂

We went through lots and lots of tunnels etched out in the mountains! 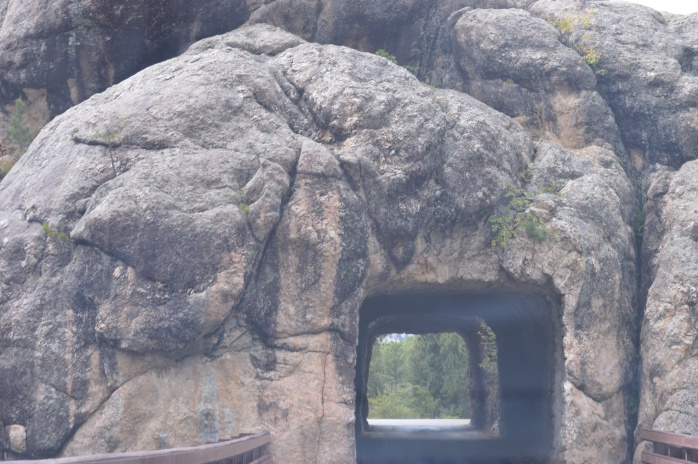 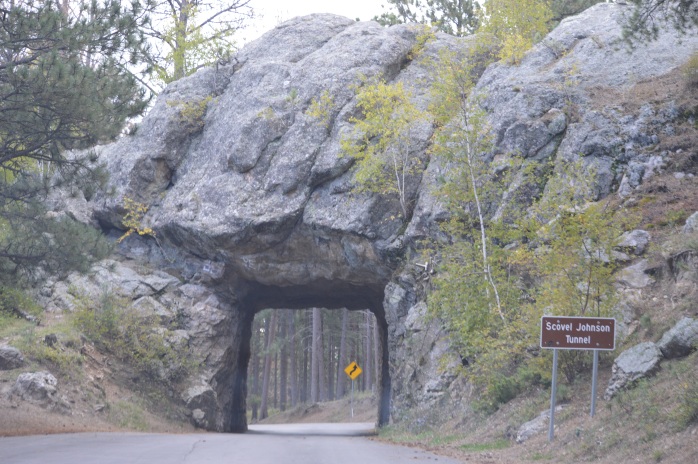 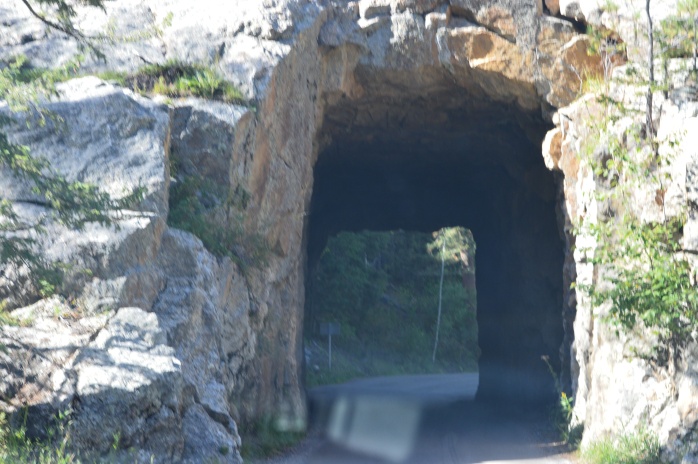 This tunnel was EXTRA special……look through to the edge of the top of the tunnel — you get a beautiful view of Mount Rushmore (which is a few miles away) as you drive through it — what a wonderful surprise!!! 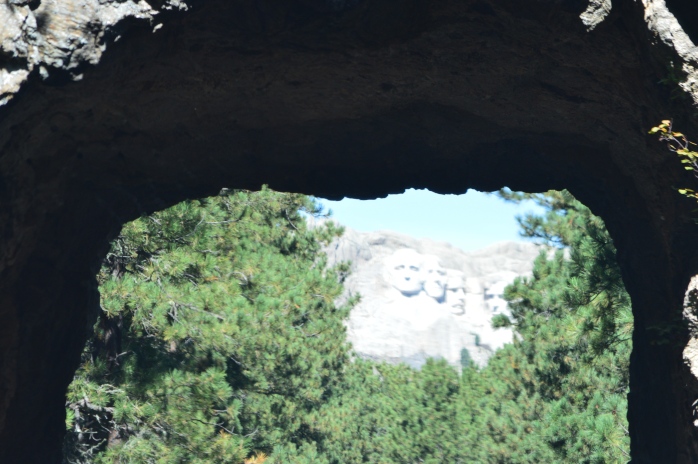 WOW — beautifully framed by the tunnel and the trees!!!

Then, a ways after the tunnel, there was a scenic overlook with a perfect view of Mount Rushmore – I believe I remember it saying the monument was about 15 miles away from where we were at Custer Park – maybe a tad less. Honestly, I enjoyed seeing it from this vantage point – the tunnel and this overlook – better than up close when we got there later in the day! It was so pretty off in the distance with the trees all around it. Just stunning!

Kevin, Donna, and Lylace checking out the info panels at the overlook

Another fascinating feature in the park were the Pigtail Bridges. Considered an engineering marvel of their day, these bridges circle around to allow the road to ease up the elevation of the park — much like a spiral staircase! I couldn’t get a good photo that shows how they wind around, but these pics give some idea! They are made of large log timbers and are simply beautiful!

I did a separate post on the wildlife I saw throughout our MEA, including what we saw roaming free in Custer State Park, but I’ll touch on it again, here…..cause it was so cool! Here are a herd of Bison grazing in the field as we drove by! 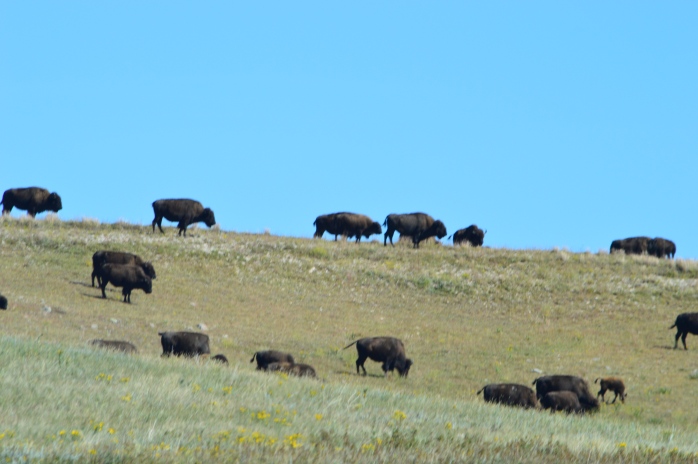 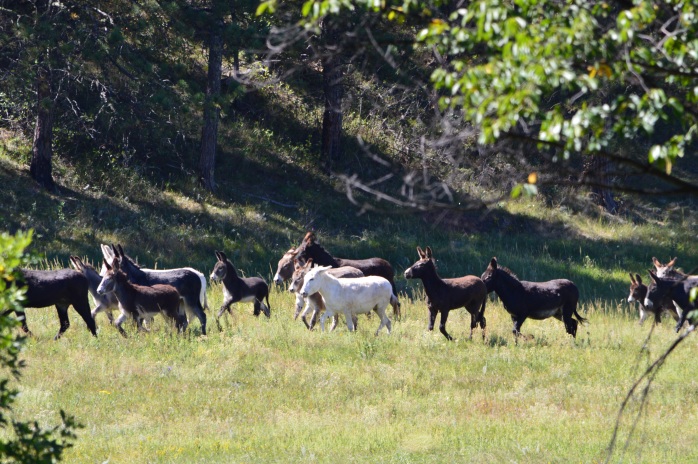 The Wild Donkeys were a personal favorite! Loved them! So cute…..and they came right up to the car windows to say “Hi” and beg for treats! 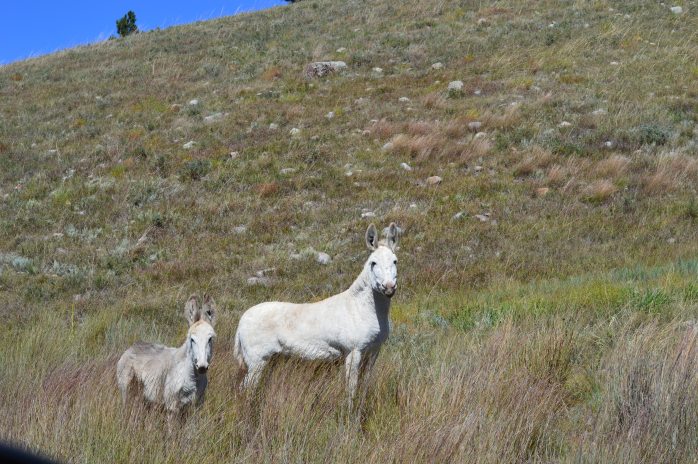 Of course, there were hundreds of Prairie Dogs……they absolutely fascinated us! 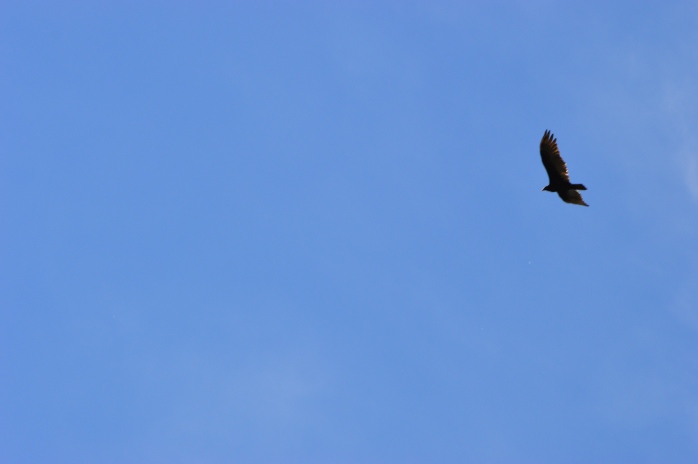 You’ll have to take my word for it, but this is definitely a Bald Eagle…..I saw it perched on a tree, but by the time I got my camera up to shoot, it flew off!

Not sure what this monument is for, but there are also crosses in the distance, so I assume it is in recognition of some holy grounds of some kind. 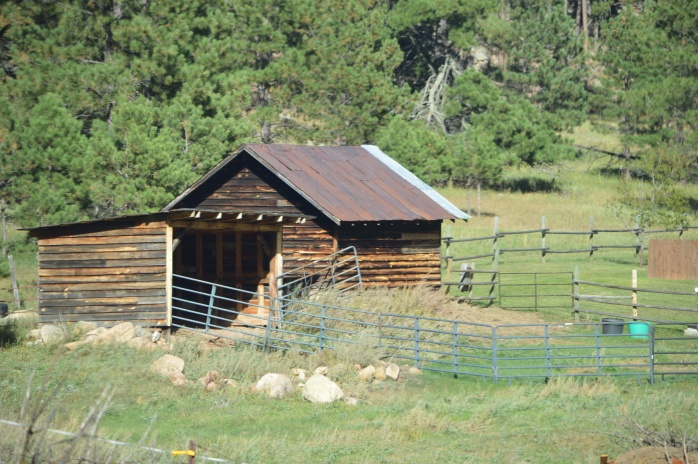 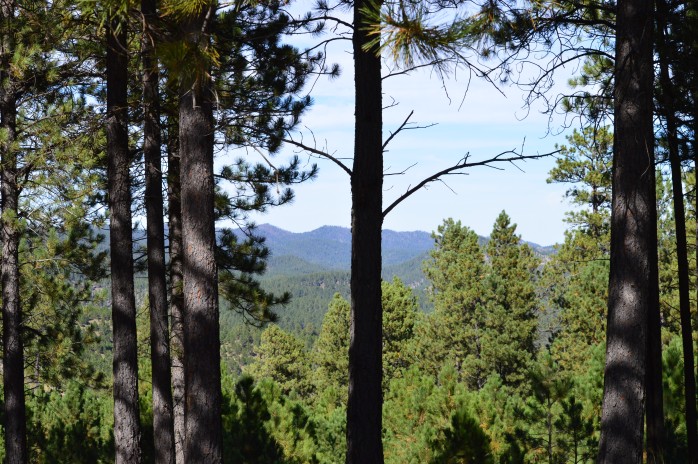 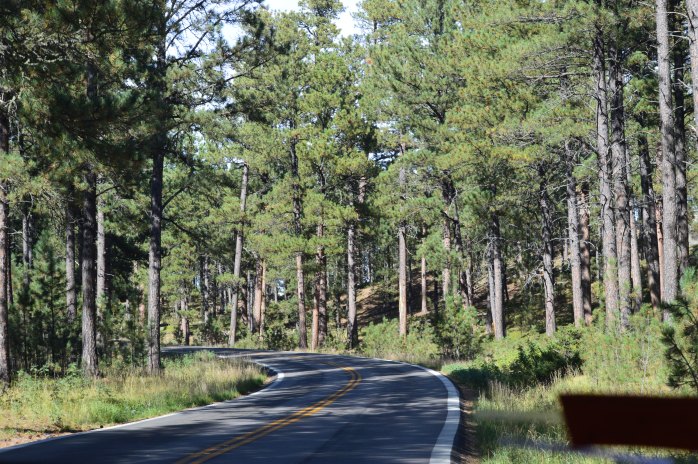 We stopped for gas and I just couldn’t resist taking this shot!

After we left Custer State Park and The Needles (which is a section of the park and the subject of a previous post), we went on to the Crazy Horse Monument. This is a monument to Crazy Horse, an Oglala Lakota warrior depicted riding on a horse and pointing off into the distance. It is still under construction and is located on private land between Custer and Hill City, SD about 17 miles from Mount Rushmore. It is being carved out of Thunderhead Mountain – considered sacred land by some Oglala Lakota. It began construction in 1948. When completed, it is projected to be the world’s largest sculpture – the head of Crazy Horse will be 87 feet tall, compared to the 60 feet high heads on Mount Rushmore.

There were some other very beautiful sculptures at the Visitor’s Center, as well. 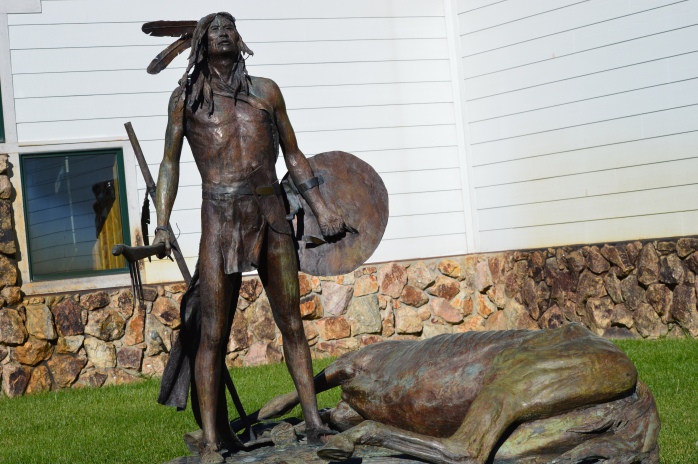 This is the sculpture that the monument is based on – sculpted by artist Korczak Ziolkowski and commissioned by Henry Standing Bear, a Lakota elder. 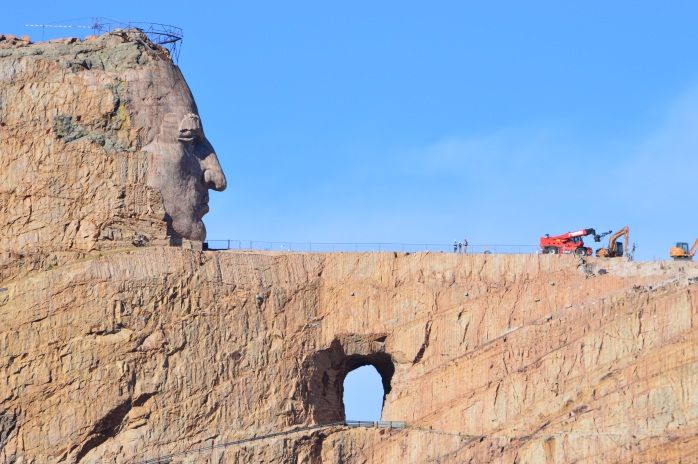 This is a scale model of the sculpture positioned in front of the one in progress to show what it will look like when finished.

Then, it was on to Mount Rushmore…… 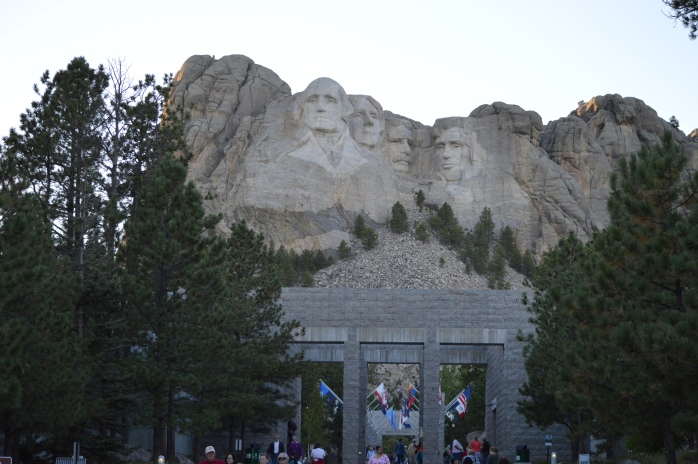 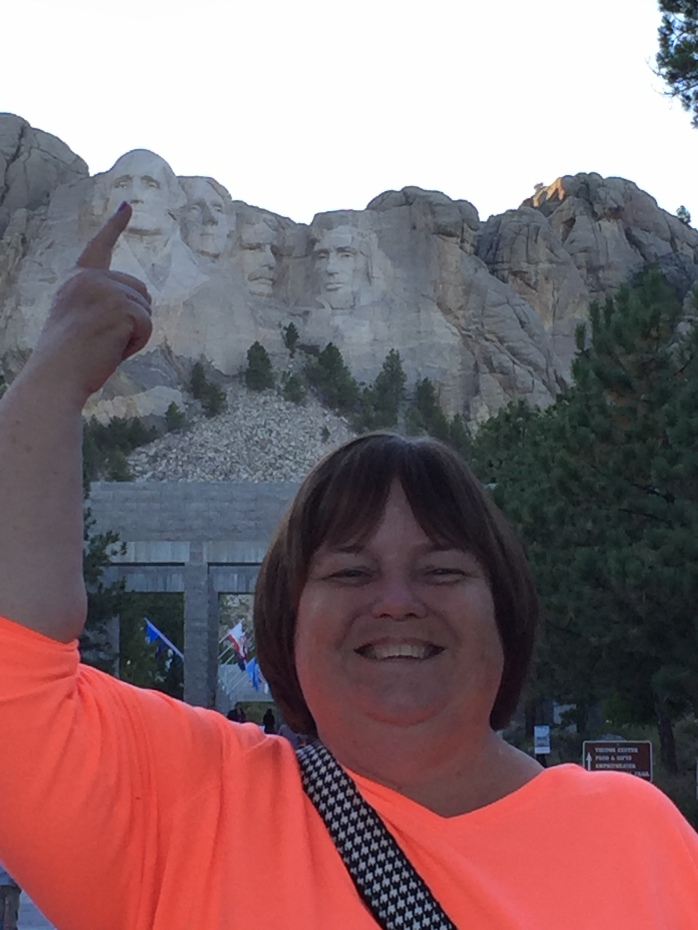 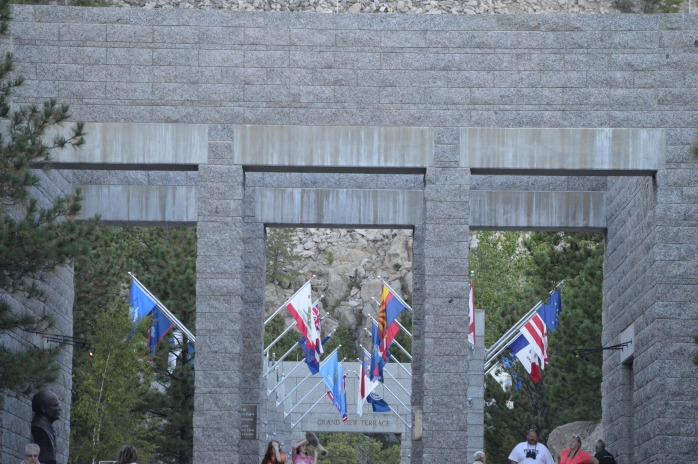 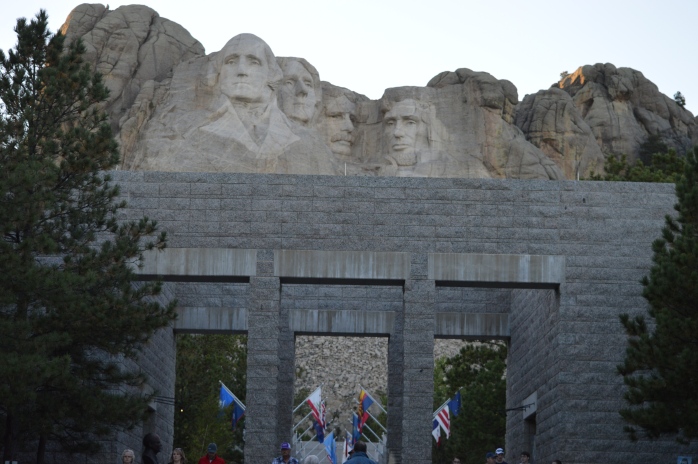 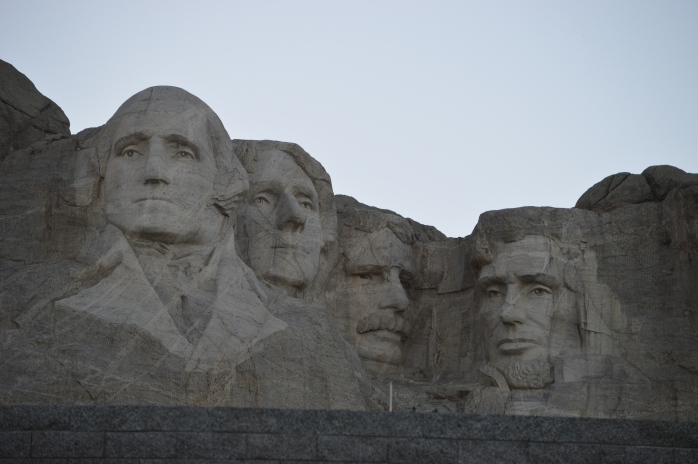 There you have it……South Dakota! Next up, will be our time spent in a MUCH warmer southern state we visited…..Louisiana!