Potatoes of the Mashed Variety 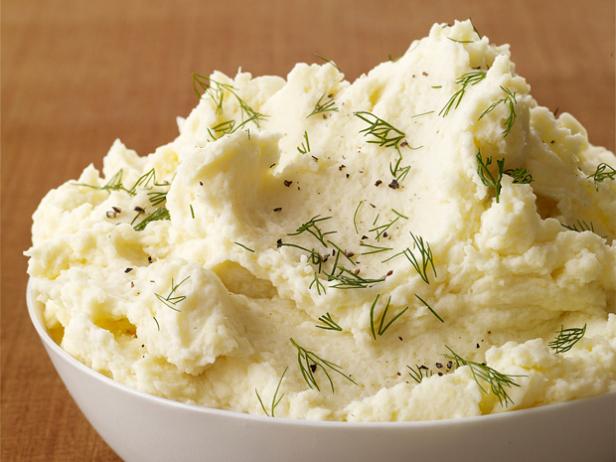 Mashed Potatoes……the ultimate comfort food! Let me just start by declaring my undying love for mashed potatoes! Yes, I do enjoy potatoes fixed in other ways – I find a simple baked potato with butter and salt and pepper on it especially wonderful with a perfectly grilled rib eye steak. I like potatoes hashed browned, home fried, boiled, scalloped, french fried, and in stews and soups. And, I’m quite fond of sweet potatoes, too. But, it is the fluffy mounds of the mashed potato that will get my mouth watering, my stomach growling, and my heart a fluttering every time!

I’ll eat them just plain with nothing on them, or with a little butter and salt and pepper, or with gravy (brown, chicken, or country) on top, or with garlic mixed in. I’m not fussy……with the exception of ruining them with cheese! I prefer to have them whipped fresh from the potato, but I don’t mind instant – so long as they aren’t too thin – and, I will take them with or without lumps and skins.

I loved them so much as a child that I had a recurring dream that I would have quite often that my pillow was a big plate of mashed potatoes and the fluffy peaks would mound up all around my head and I’d bury my face in them. Luckily, I never ate my dream potatoes!!!! I also used to love to play with my mashed potatoes to make them last as long as possible during my meals. I’d make trenches and mountains so that the butter or gravy would flow in rivers through the scenes or flatten them all out to cover more space on the plate to make them seem like more than just a scoop. I also used to take my fork and press down on them so the potatoes would squish up through the tines – I’d marvel at how high I could get a good stiff mound of mashed potatoes to stand up in the rows that I would then call “mashed french fries” and try to eat them one at a time. And, there is nothing better than mixing your corn in your mashed potatoes!!! YUMMO!!! Of course, Mom was always trying to teach us good manners and would tell me to stop playing with my food, but she didn’t realize it was my way of showing my admiration and appreciation for this wonderful treat!

Another favorite childhood memory involving mashed potatoes is from the cafeteria at school – I lived for and anxiously awaited “Hamburg Gravy over Mashed Potatoes” day in the cafeteria!!! OMG……the BEST lunch meal of the week! I still make it from time to time! And, it goes without saying that I adore Shepherd’s Pie, too, because, well…..it is topped with mashed potatoes!!! I also like to make a meat loaf and then top it with mashed potatoes and put it under the broiler for just a minute to brown the peaks……..I am making myself so HUNGRY, here!!! It is only 9:30 am…..would it be so wrong to have mashed potatoes for breakfast???

Believe it or not, I’ve found that there are a LOT of different ways to make even the most simple bowls of mashed potatoes. Not everyone makes them the same way. You’d think it would be consistently done, but nope! I, personally, whip them with beaters, add a little milk for creaminess (but not too much – I like to keep them thick) and about a 1/2 stick of butter (or more, depending on how big a batch I’m making) as I whip them. This makes them smooth, creamy, and buttery…..and, oh so good! Another trick I learned from my ex-husband before we were married that I still do on occasion is to add a very small squirt of yellow mustard to them as I whip them……yes, I know – sounds gross and my reaction when I saw him doing it was to shutter and go “eeeewwww”!!! But, it is good!!! You don’t put much in them, so you don’t really taste the mustard, but it gives them a little tang that is really quite interesting – but, I don’t do that too often and rarely if I’m making them for company. A lot of people don’t use beaters to make their mashed potatoes – some people mash them with a potato masher, which I find makes them more coarse…..some use a potato ricer and then blend them with a fork or other utensil, which, again, I find makes them more coarse, but less so than the mashers do. Some don’t add anything when they mash them, but just add a bit of butter on the top of the bowl…..some add milk, but no butter or vice versa. Some like them thick, some prefer them thin, some like lumps cause it proves they didn’t come from a box, some get all bent out of shape about lumps, some leave the skins on (especially if using red potatoes), and some just make it easy on themselves and mix some water with powdered potatoes and pop them in the microwave. Doesn’t matter how you make them……they are still the ultimate comfort food!!!

So, what got me thinking so much about mashed potatoes that I felt the need to write an entire blog post about them? Well, yesterday when I went outside to clear a path in the snow on the back patio for Megan to more easily get out to the yard to take care of her business, I noticed something really cool. As the snow piled up on the mesh chairs on the patio, it pressed through the mesh and, given the sub-zero wind chills, it froze in fringe like strips!!! COOL!!! Two images instantly came to my mind: 1) potatoes being pressed through a potato ricer, and 2) how nice, stiff mashed potatoes looked when I pressed them with a fork when I was a child!!! (A little bit obsessed with mashed potatoes, are we?) So, you know me, I ran inside to get my camera and snapped a photo….duh!!!

First – to remind everyone what potatoes going through a potato ricer looks like: 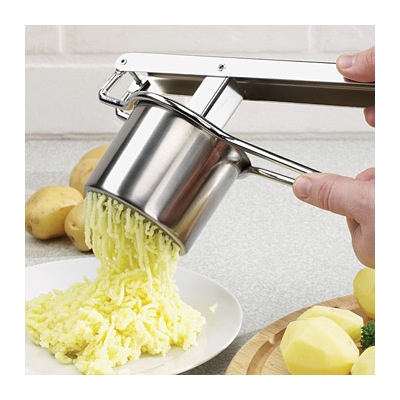 And, now…….the snow fringe on my patio chairs: 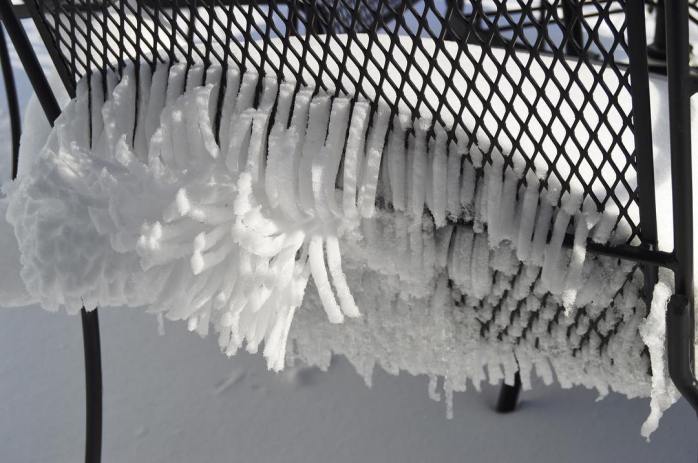 See it? Am I right? Potatoes through a ricer, huh? So cool!!!

So, go out and get a bag of potatoes and make a big bowl of mashed for dinner!!!

Category: All About Me, Dreams, Food, Guilty Pleasures