The Albion Merchants Association did an amazing job of hosting a crowd of about 450 kids plus their parents for their annual Beggar’s Night event! Tonight was my first time walking the streets with the kids and taking photos – what a great time I had!!! And…..a couple of the merchants even gave me some of their candy, even though I am not a kid…..and wasn’t in costume…..and didn’t “beg” for it…….maybe it was my childish good looks that persuaded them to toss a treat my way!

Anyway……it was a great night for the kids!!! There were 30 stops with merchants out in front of their businesses handing out candy, as well as other owners of businesses from outside the immediate walk route who set up tables along the way! And, most of the merchants that participated were in costume – much to the delight of the children…..and us big kids that happened by, as well!!! They also had several student volunteers from the school to help out – that is an awesome way for them to get their community service credits and have fun doing it!!!

The merchants in downtown Albion are a wonderful bunch of people…..be sure to visit and support their businesses to show them how much we all appreciate the events they put on and the work they put in to making our lovely Village a destination worth checking out….often!!!

Here are some photos from the 2015 Beggar’s Night in Albion, NY – I didn’t get a photo of every stop and shop owner – so sorry about that – but, you can see the level of participation and the fun the kids had:

Just after 6:00, the kiddos started up Bank Street to their first stop! About an hour and a half later, I left and there were still some stragglers finishing up the route! Just look at this adorable little queen and her pirate escort! 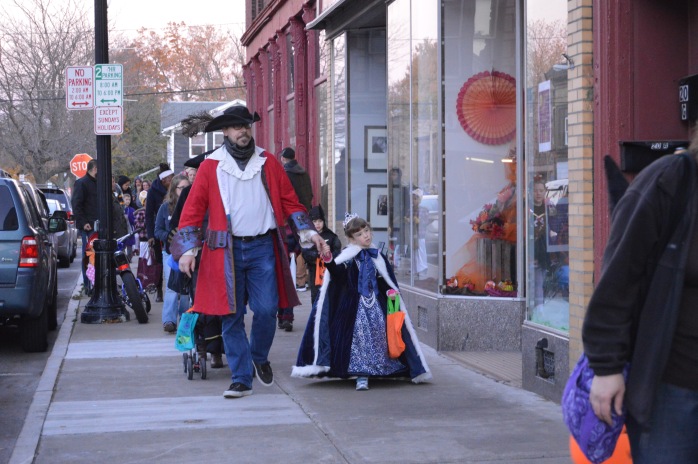 At the first stop, the little beggars found a nun handing out candy for Empire Trading!

Lori Laine (our friendly “Not so average Fairy Godmother”) and her daughter, Katie Laine Harvey, represented their business, Frontier Heating. And (in the second photo below), it was really nice to see Mary Poppins drop in for a photo with Fairy Lori!

Adam Johnson and his crew from Blue Top Management went all out with the costumes! 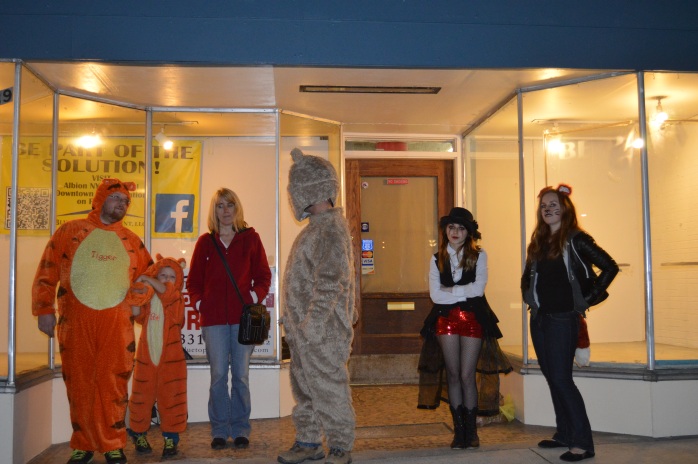 This beautiful swan is Marsha Rivers, Executive Director of the United Way of Orleans County. Her costume is a play on the fact that the new location for the United Way office is in the old Swan Library!!! And, even more appropriate to the whole theme of her stop on the route was her son sitting on the steps in the background reading a book! 🙂

First Niagara Bank got in on the action! 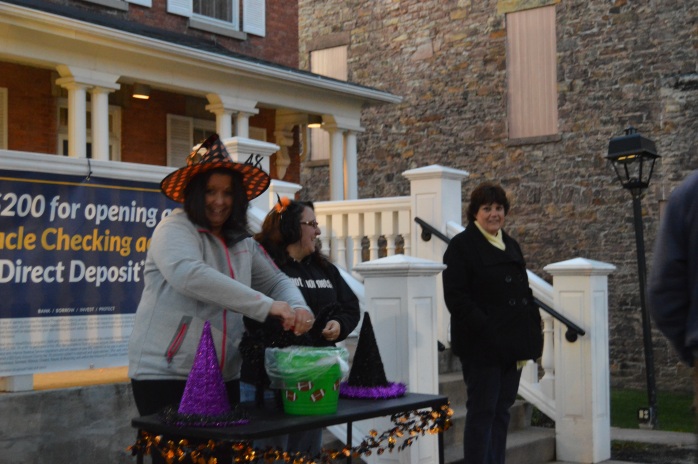 Here we have Lisa Stratton, owner of The Hazy Jade Gift Shop, dressed up like a leopard and there with her is none other than the Village of Albion Code Enforcement Officer, Ron Vendetti, as a monster convict (when I was waiting for the kids to start coming up from the fire hall, he growled at me and I growled back at him…..didn’t know who he was at that time! hehehe)

The Hoag Library is outside the walk route, but they came down and set up to participate!

Carolyn Ricker, owner of Bindings Book Store, and Frozen’s Elsa were a delight for many of the little ones! Carolyn is wearing an anteater hat from a new game she has for kids to come in to the store to play – Anteater and Antics! 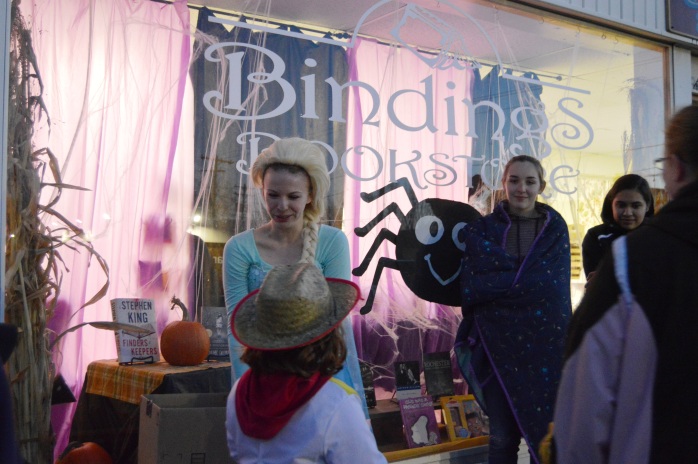 Darrell Dyke is the instructor for the Jedi Academy, part of the children’s church / religious instruction program at the Pullman Memorial Universalist Church. 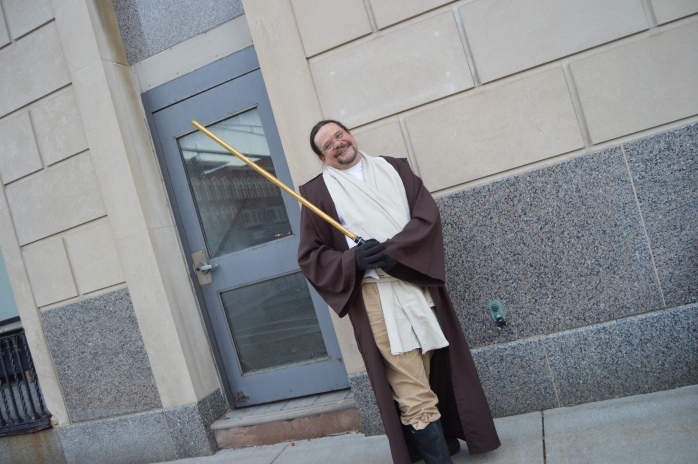 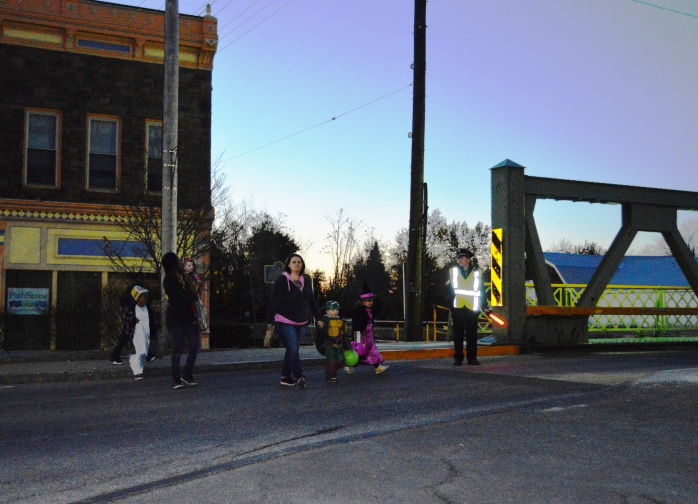 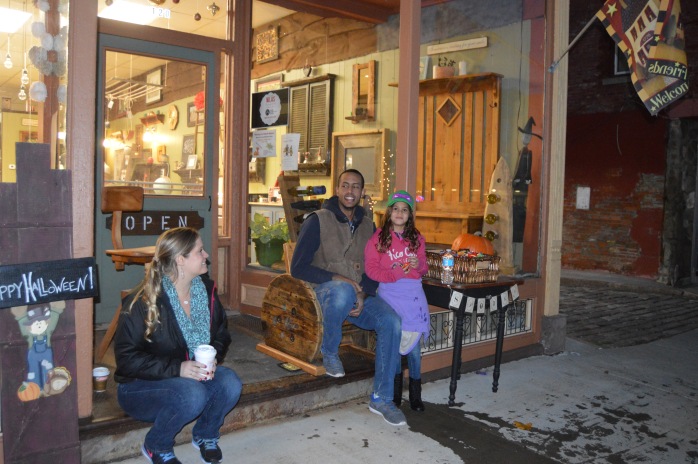 Just one of many big baskets of candy waiting to be placed in eager little beggar’s bags! This one just happens to be at Knight’s Pride. 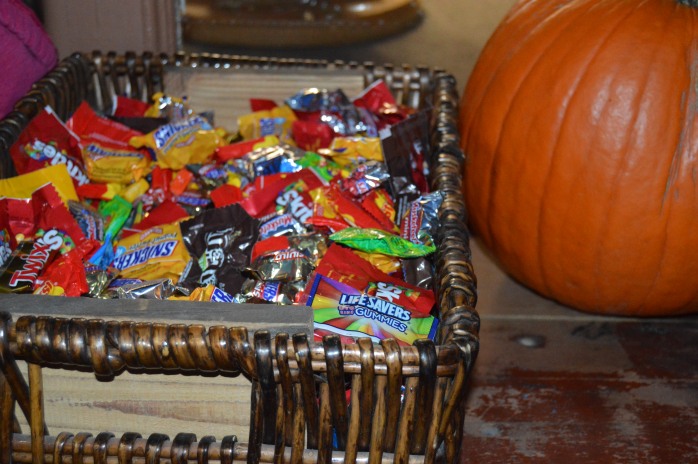 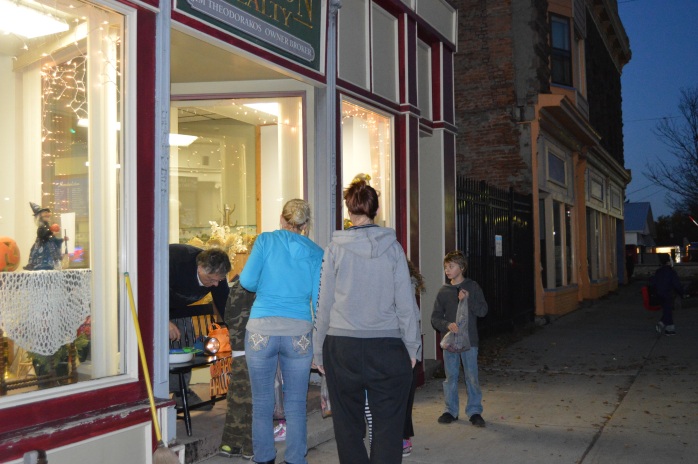 Taken from far above the crowd…..yep, I built up enough courage to climb the lift bridge stairway to get a shot of the kids lining the street from above!!! 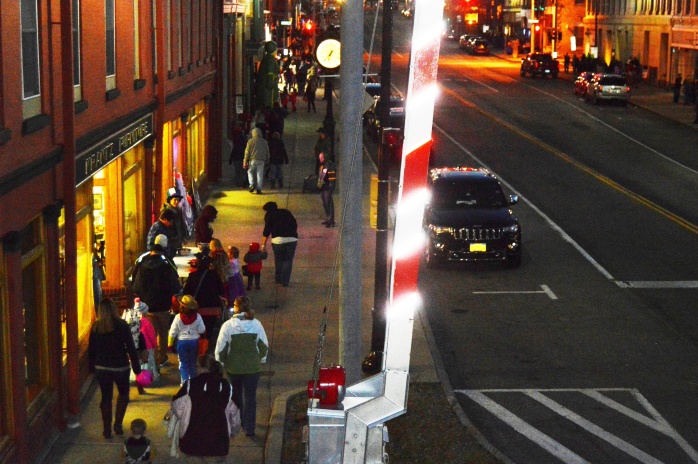 Children loved the large cutouts along the front of Krantz Furniture – some stopped to have their photos taken with the monster from Monster’s Inc!!!

Another cool photo op for kids was the giant Weed Man character!

Mitzy shares her candy by night and travel expertise by day at Orleans Travel Bureau.

And, the fun continued well past dark!!! 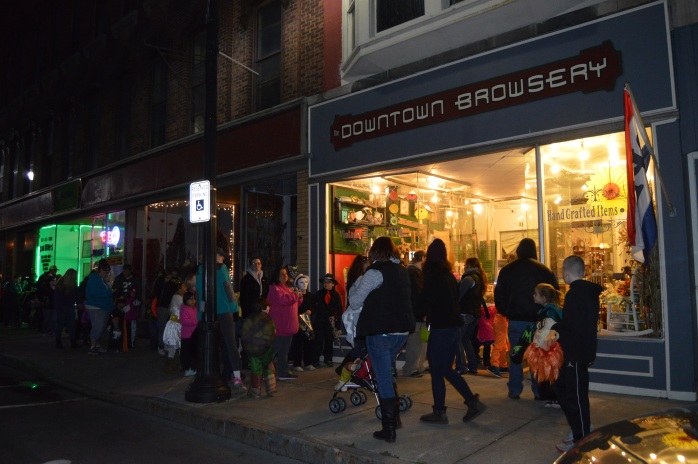 It was a pleasure seeing our Village Trustees and our State Assemblyman all participating and having fun with the kids!

NY State Assemblyman, Steve Hawley in front of his Albion office….dressed as a gorilla!!! 🙂 With him in the red jacket is Eileen Banker, Assemblyman Hawley’s Chief of Staff and Albion Village Deputy Mayor and Village Trustee:

Even the buildings seemed to participate!!! I love how the lights on the top of the Briggs building look kinda spooky — like when you shine a flashlight up under your chin!!! 🙂

Happy Halloween!!! Tonight was Beggar’s Night and it was all fun, but the big night for Trick or Treating is tomorrow, so be safe out there and watch out for kids in the streets after dark!