On the second Tuesday of each month, a group of ladies from my church gather for lunch. Every month we go somewhere different – sometimes close by, sometimes further away. This month, we went to the restaurant at Terry Hills Golf Course in nearby Batavia. Batavia is about a half an hour (if that) south of here – it is a straight shot down route 98 from downtown Albion right into Main St. in Batavia. I never used to go to Batavia much – with the exception of going for brunch at The Firehouse or pizza at Pontillo’s, Batavia didn’t hold much attraction for me in my younger years. But, in the last few years since I’ve been back home, I go fairly often. I started going that way mainly because my nephew and his family live there…..then, I started using a dentist in Batavia. Whenever I would go for either, I’d check out what else might be worth the short trip. Batavia has a Target and an Office Max – both of which I like to occasionally visit, but there are also several really good restaurants. I’m finding more and more that Batavia has a lot to offer. I also always enjoy looking at the beautiful old buildings I drive by whenever I am driving through town – they have some stunners!

So, when I got ready to head out for the ladies lunch, I put my camera in the car – I thought I might take a couple photos of the firehouse and the jail and a few other cool places – just a few shots….not many….just make a couple stops on my way out of town. Well…….I paid more attention than usual and found OTHER stuff to stop and photograph……and, in attempting to get a place to park in some of the spots, I had to go around a few blocks and discovered MORE stuff……the plan to take a couple photos on my way out of town turned into about two hours of driving, stopping, walking, and photographing all kinds of things that caught my eye in Batavia! So……here are just a few of the almost 200 photos I took!

Just thought this was a cool name for a dog grooming business!

Another business name that made me chuckle!

And, I really liked the name of this day care!

Batavia’s Original Pizzeria used to be Pontillo’s! After a change in ownership and some legal battles, there’s no more “Pontillo’s” in Batavia, but I hear the pizza here is still AWESOME! I need to check it out sometime! 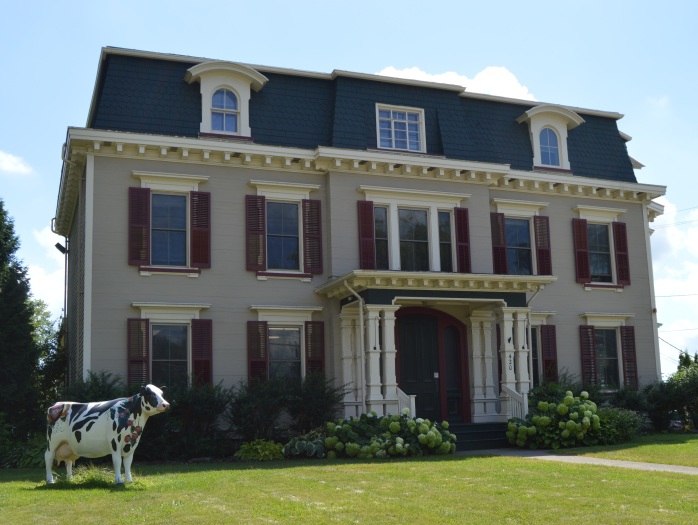 You know I can’t resist cow or horse statues! This one is right on Main St in front of the beautiful Cooperative Extension building!

And, then, there is this lovely horse at Oliver’s candy store….I cheated, I didn’t stop and take this photo yesterday – I knew I had one in my files from a previous post, so I decided to use the one I had and save my time for other photos! hehehe

I pulled into a parking lot to get a shot of a church across the street and noticed this on another church – beautiful!!!

The church across the street

I pulled in behind Main St in a parking lot to so I could walk around some and found this little waterfall! This is Tonawanda Creek! I knew there was a large creek or small river that flows through Batavia, but didn’t know anything about it and certainly didn’t realize there was this peaceful setting and small
waterfall right there in the middle of the bustling downtown! 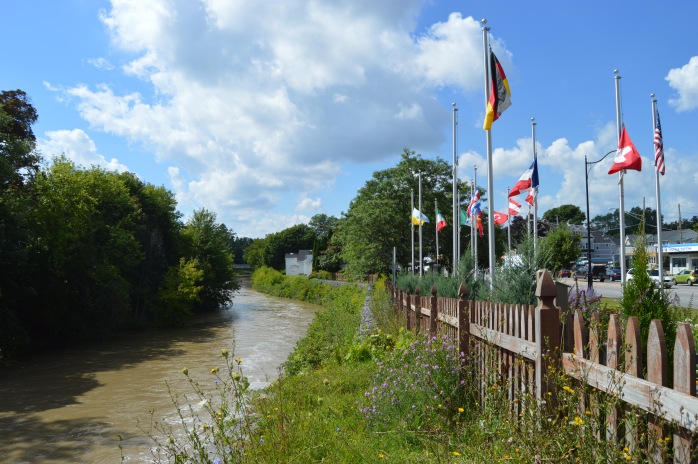 I’ve noticed this International Peace Garden many times and always wanted to stop for a closer look! It commemorates the War of 1812 and spreads out along a nice size stretch of Main St. The next few photos show many of the elements of the Peace Garden.

LOVE this cool bench in the Peace Garden 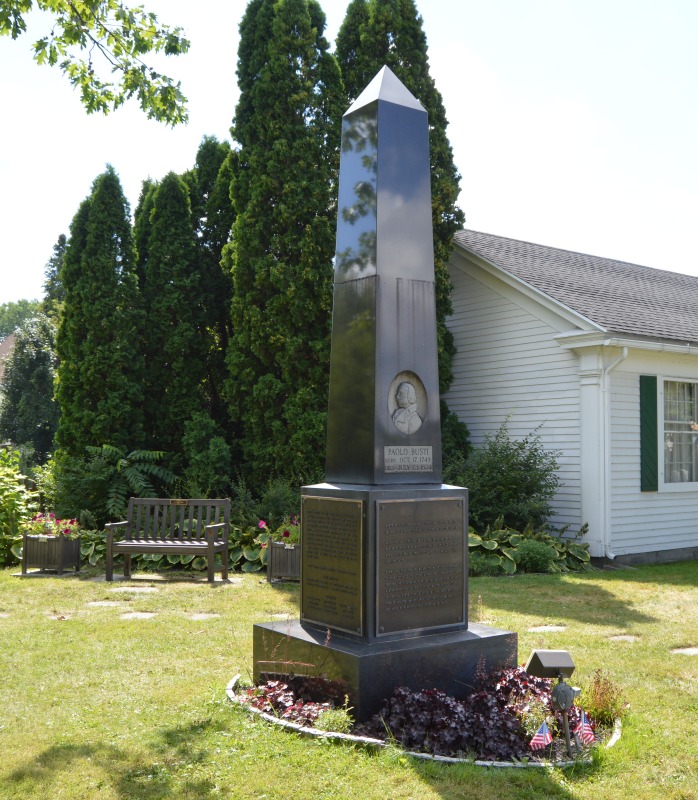 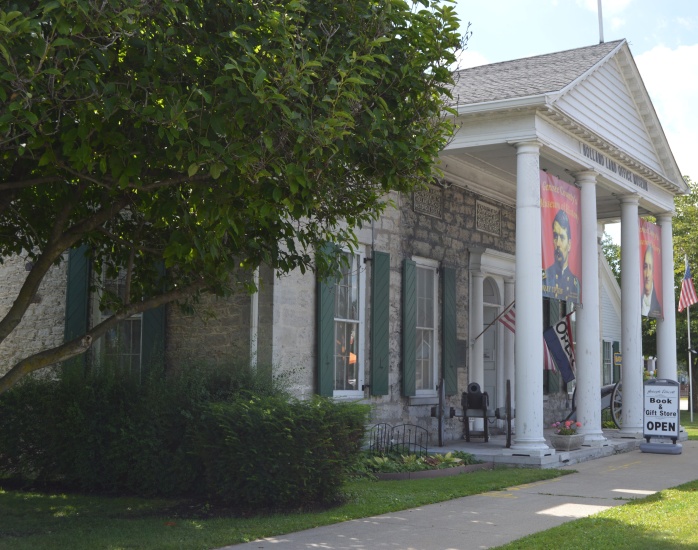 I like to think that it is something really cool to know that the land my house is built on was part of the Holland Land Purchase – it says so on my abstract…….but I do know that is not unique or special because ALL of Western NY was part of that purchase…..but, I still think it is cool!!! hehehe

I love the cool stuff you find just by looking UP and being observant! 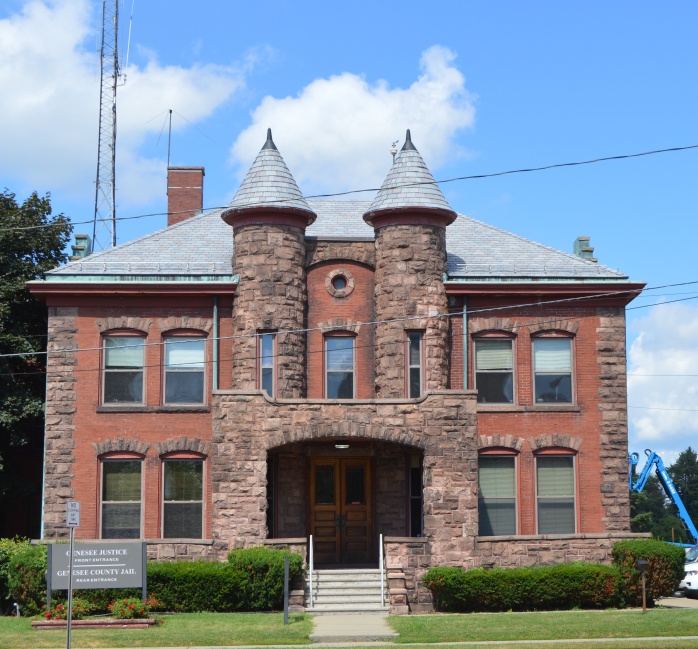 This is the home of the Genesee County Jail…..an amazing building made of Medina Sandstone and brick! 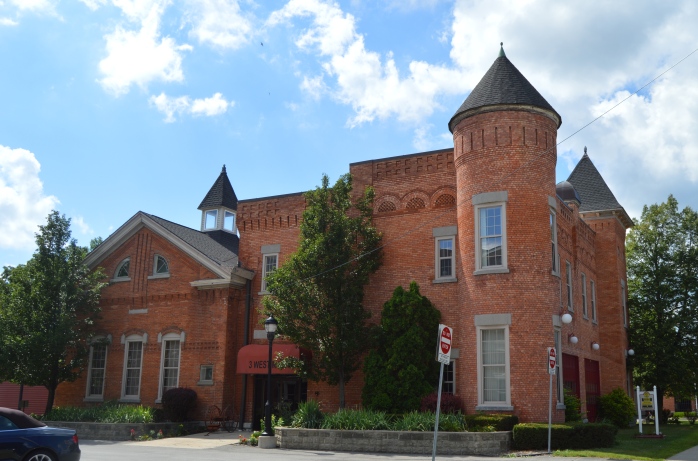 The fire house on Main Street…..Love this building!!!

As with many historical towns, there is a monument in the center of the busiest section of town where Main St and Ellicott St meet 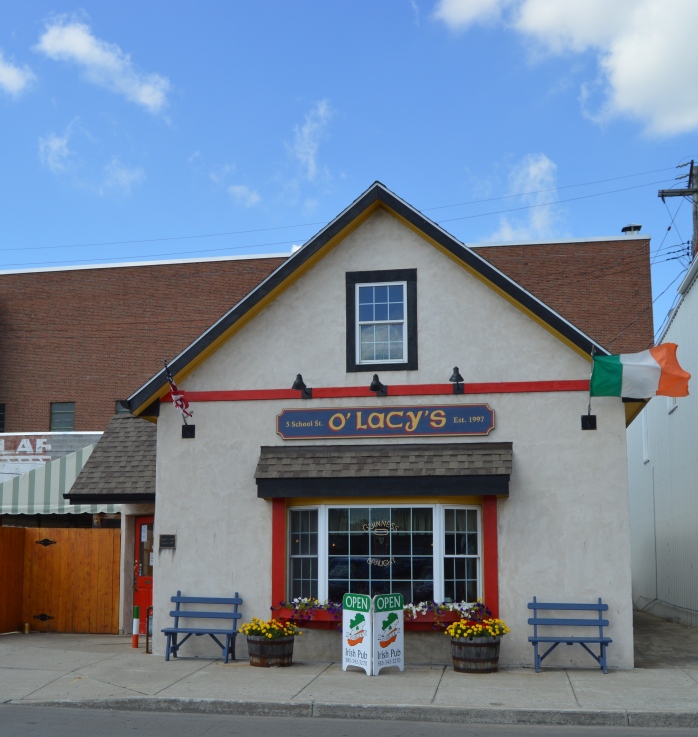 This is O’Lacy’s Irish Pub — I love this place!!! Just a little restaurant tucked away behind the busy downtown streets that has the BEST Irish stew I’ve ever had……Beef, Lamb, or Guinness, depending on which one they made the day you visit!

The walk-way to the door of O’Lacy’s is paved with Leprechaun foot prints!!!

This building is now the home of Center Street Smoke House but, it originally housed newspaper offices and printers

When returning to my car, I noticed this sign across the parking lot – cool name for a florist!

I’ve heard a lot about these free library stations popping up across the country, but this is the first one I’ve ever seen, personally! It was on a corner in a residential area I passed through while going around the block to get a parking spot!

And, Batavia is home of Batavia Downs – horse racing and casino! I’ve never been inside, but would love to go to the horse races, sometime, and even try my luck at the casino!

I noticed a helicopter making his approach for landing at the county airport. I was close by, so I decided to see if I could get some photos of his landing……alas, he landed much further up the runway than where I was standing, but I did get some good shots of him taxiing in! 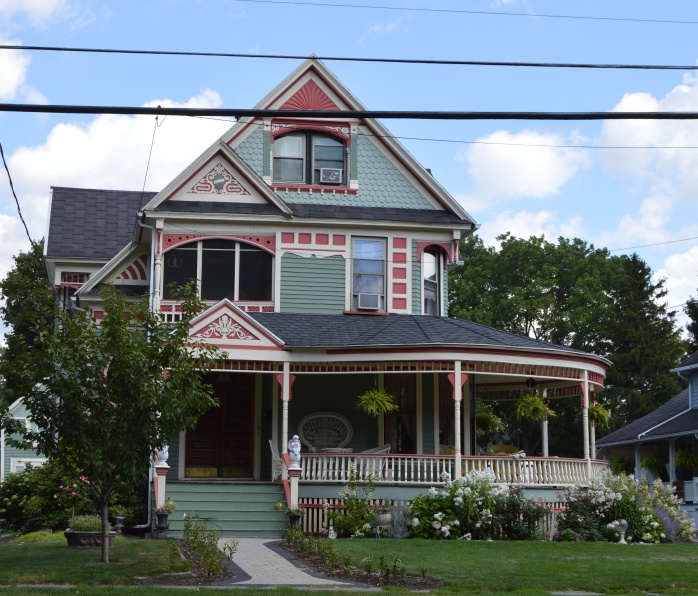 And, finally…..there is the best “find” of the day! This house took my breath away!!! The photo pales in comparison to how it looked up close and personal…..the colors, the detail, the amazing porch, the flowers, the wicker furniture on the porch……it just all comes together to make one absolutely gorgeous home that I would LOVE to live in!!!

So, that ends my adventure in Batavia……just a dent in what caught my eye and, I’m sure, an even smaller dent of what I could have found if I did even more exploring!!!