This month, the ladies group from my church decided to go to the Glen Iris Inn in Letchworth State Park for our monthly luncheon.  I was soooooooooooo excited!!!  I haven’t been to Letchworth since I was a teenager and have never been to the Glen Iris.  When we made the decision at last month’s lunch, I rushed right home and googled the Glen Iris and the anticipation over the trip started to grow!  I read just about every word on every page on their website – including the menus – and decided right then on that day what I was going to have for dessert!!!  And, I thought about the Glen Iris and that dessert ALL MONTH LONG!!!  I decided I would drive alone and go down early so I could do some exploring before and after lunch – make a whole day of it!  I turned my calendar to write it down so that I wouldn’t schedule anything else for that day and found I already had TWO appts scheduled!  Uugghh!!!  But – not to worry, so I had to reschedule my dental cleaning and a hair appt – no problem!  Nothing was going to get in the way of this day trip!

So, yesterday came – I got up and ready a little later than planned, but still hit the road early enough to find my way there (I had no idea how to get there – I always rode with parents or friends and never drove myself – not to mention the last time I went was forty-some years ago) and look around some before lunch.  I arrived about 45 minutes before the others were set to arrive, so I parked and checked out the restaurant.  I went through the gift shop and, of course, found a couple of things I chose to purchase – a pack of note cards with a pen and ink drawing of the Glen Iris on them, a Guardian Angel pin with my birthstone (Opal) on it, a bracelet, and a gift for my Mom.  I walked across the way to an overlook to see the waterfall – spectacular view and spent some time sitting on the chairs on the porch of the Glen Iris waiting for my friends.  The weather was perfect – low 70s, gorgeous blue sky, a gentle cool breeze – couldn’t have ordered a more perfect day!

While waiting, I took a few photos:

This is the Glen Iris Inn – stunning!  It was the home of William Pryor Letchworth, an estate built in 1859, and is situated in the center of the park at the Middle Falls.  Mr. Letchworth gifted his home and approximately 1000 acres to the State of New York in 1906.  The park has since expanded to cover over 17 miles with over 14,000 acres along the Genesee River.  The park is known as the Grand Canyon of the east – you’ll see why when you look at the photos I took while exploring the park after lunch. 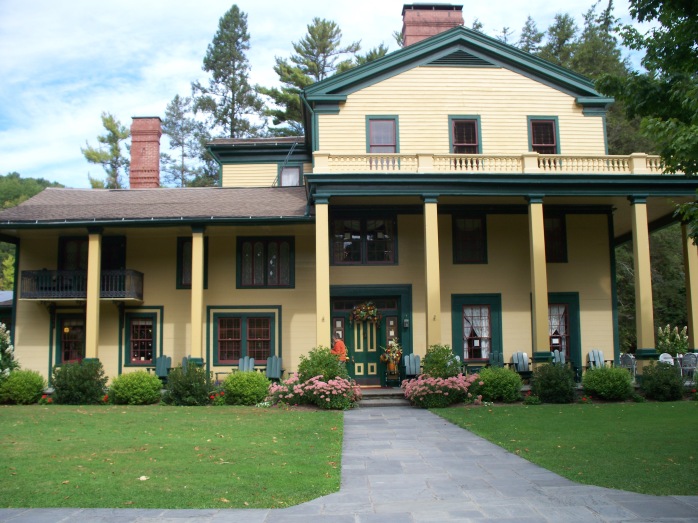 The first of my exploring was before lunch – across the way from the Glen Iris is what is known as the Middle Falls – one of three large water falls in the park along the Genesee River.  The overlook offered a spectacular view of the falls and the gorge – so incredible it brought tears to my eyes!  These photos absolutely do not do it any justice at all, so you have to try to imagine the beauty in the photos multiplied by at least 1000% and you might come close to understanding the majesty of it!  In the third photo, below, you can see the Portage Bridge in the distance – a better shot of it will come later in this story. 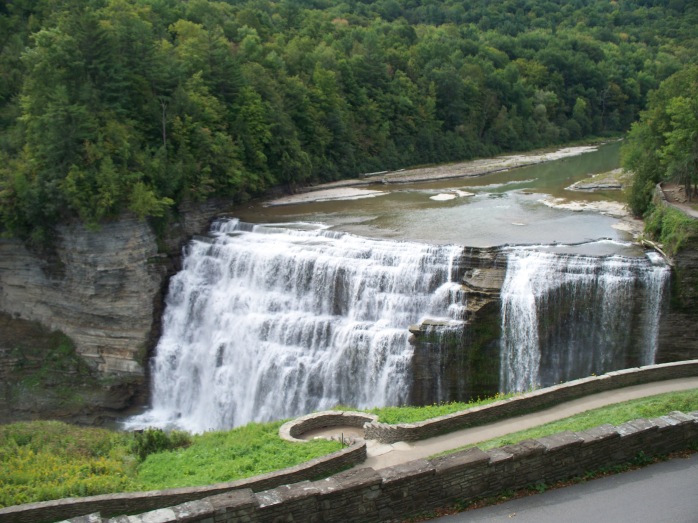 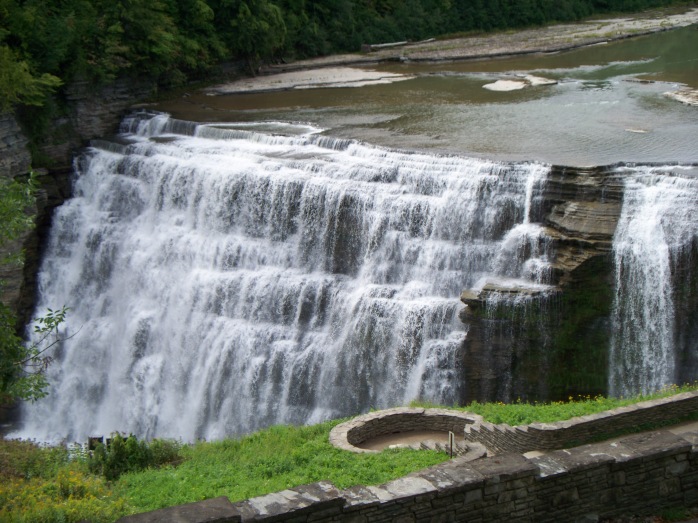 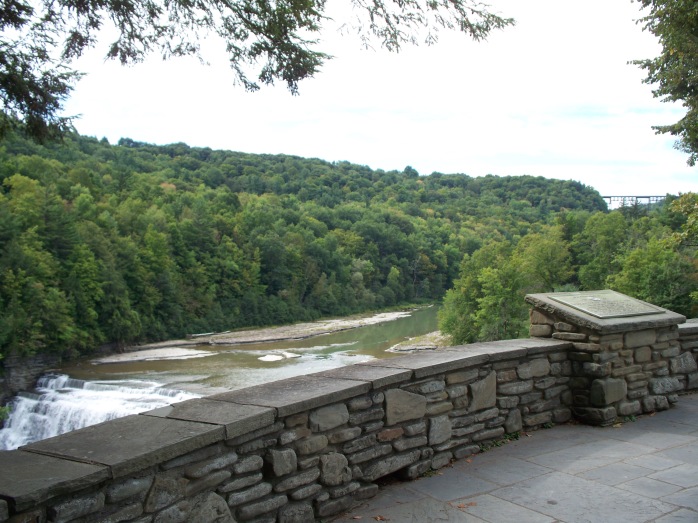 When my friends from church arrived, we were seated in a lovely room, impeccably decorated, all to ourselves.  There were 16 of us seated four to a table in a cozy setting.  We all had a fabulous meal — I had the Waldorf Chicken Salad sandwich on a croissant and it came with a fruit cup – DELICIOUS – the sandwich was packed with chicken, grapes, and walnuts with lettuce and tomato!  Some of the other ladies had sandwiches that looked amazing, as well, and some had salads that I swear could have fed a small country – HUGE!!!  Of course, I told you I already knew what I wanted for dessert and had been drooling over it for a month, so I only ate 1/2 my sandwich and got a box for the rest of it (I’m actually eating the other half while I’m writing this and it is STILL delicious) – I didn’t want to be too full for what I was sure was going to be the highlight of the day!  I hoped that all that anticipation would cause it to not live up to the legend I created in my mind – I surely didn’t want to be disappointed.  Well, I wasn’t!!!  It was one of the most incredible desserts I have ever had.  I savored it and enjoyed every single spoonful – I even came dangerously close to licking the bowl, but didn’t want to leave a bad impression of me with my new friends – I want them to let me go with them again!  hehehe  Although, the ladies sitting at my table did dare me to do it and even offered (threatened) to snap a photo of me doing it!  (OK, I officially like these ladies!)  The dessert was called Berry Hill – it was strawberries, blueberries, and raspberries sautéed in butter and brown sugar and flamed with triplesec, then served over three (count them – 3) scoops of vanilla ice cream!!!  It was a truly spiritual experience!

This is the waitress preparing the berries in butter at our table: 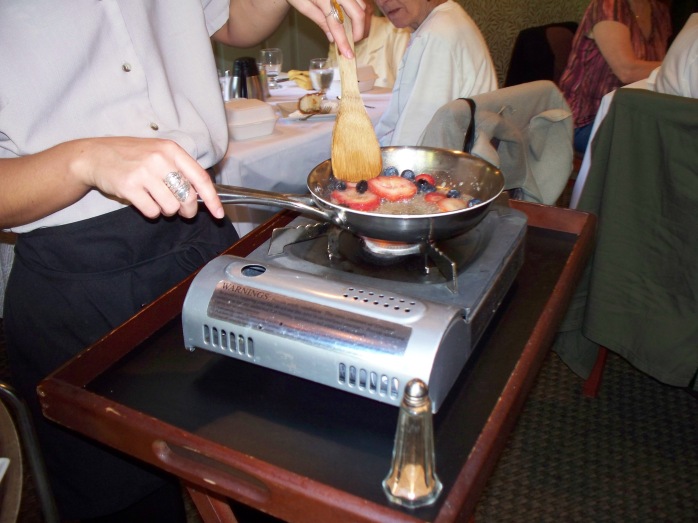 And this is the flaming berries after she added the triplesec – the flames were exciting and pretty, but a little disappointing after seeing the Bananas Foster prepared at the next table — the dark rum flames on that dessert filled the entire pan and shot all the way up to the ceiling – now THAT was impressive and I’m sad I didn’t get a photo!  But, my dessert preparation was entertaining, too! 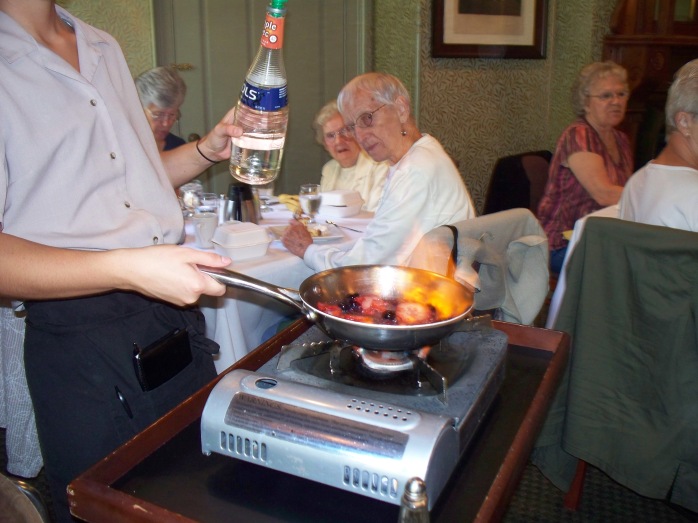 After almost two hours of great food, good conversation and company, and lots of fun, the ladies all left and I took off on my day of exploration.  Before I get into this part of my story, let me just say that if you look up “Nature Girl” in an encyclopedia, dictionary, Wikipedia, or whatever way you use to get accurate definitions, you will NOT find my name – not in any stretch of the imagination!  I love to view nature, but I do NOT want to be a part of it!  But, yesterday, I became one with nature – sorta – but don’t expect to see it again!  🙂

My first stop after lunch was a return to the gift shop, where I gave in and bought a set of angels that I saw earlier and resisted purchasing.  Then, I went across the street to the park museum to learn more about Mr. Letchworth and his amazing gift to our state.  There were several displays of Seneca Indian artifacts found in the area and displays of Mr. Letchworth’s possessions and showing his love and support to the community.  This next two photos are of the front of the museum building and a lovely square grand piano that was in his home: 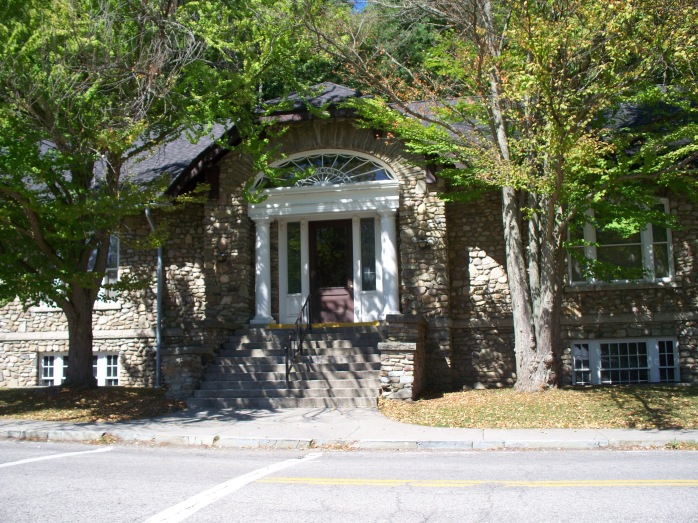 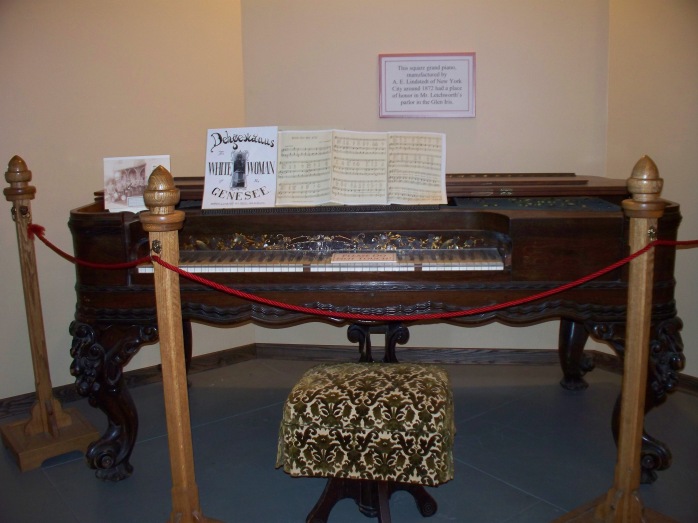 The most fascinating artifact in the museum is a HUGE – and I do mean HUGE – mastodon skull that was found near Pike, NY in 1876!  Mastodons were large elephant-like creatures that became extinct over 11,000 years ago – I’ll repeat that – 11,000 years ago – and here is proof that they are not just something made up for dinosaur movies – they actually existed and roamed around right here in Western New York!!!  This is a photo of the skull in the museum and one I found on the internet of what a mastodon is thought to have looked like when they were in existence: 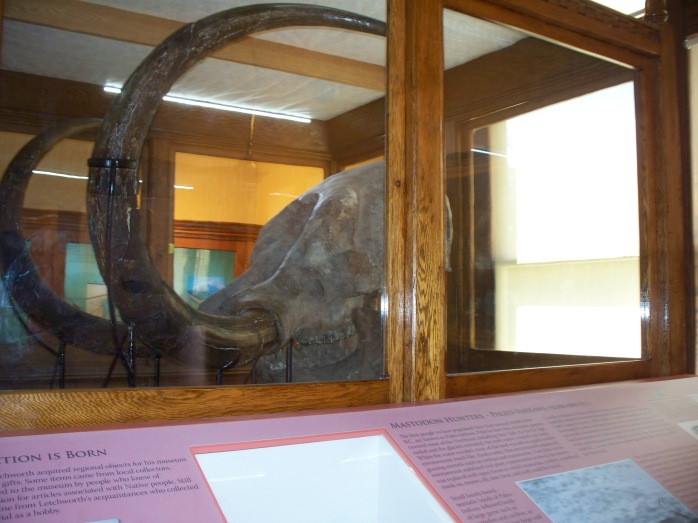 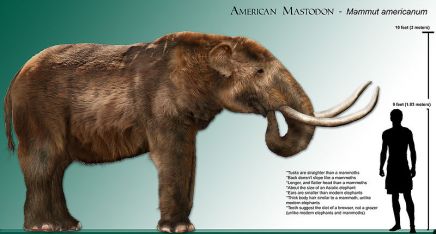 A shot from my car as I drove along the road through the park: 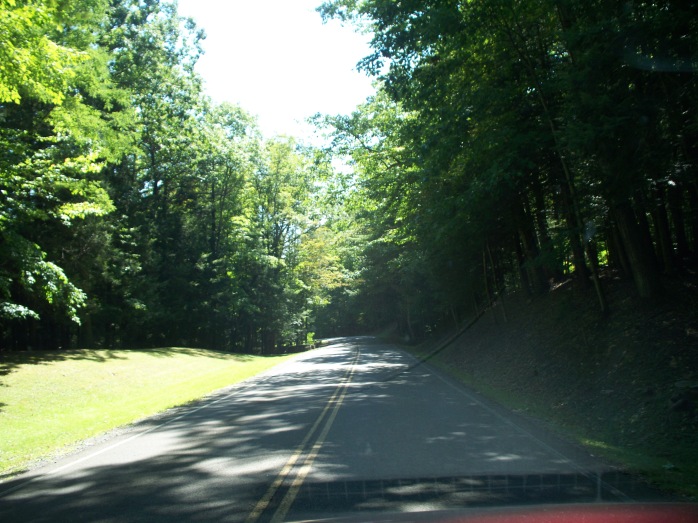 This is the Portage Bridge – an iron bridge that replaced the highest wooden bridge in the world, which burned in 1875: 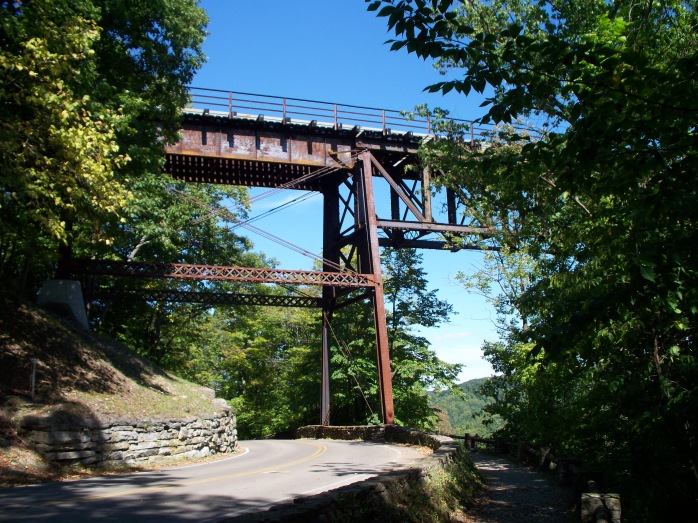 The following photos are of the Upper Falls located near the Portage Bridge, the trails and gorge around the Upper Falls, and some other shots I took along my travels through the park: 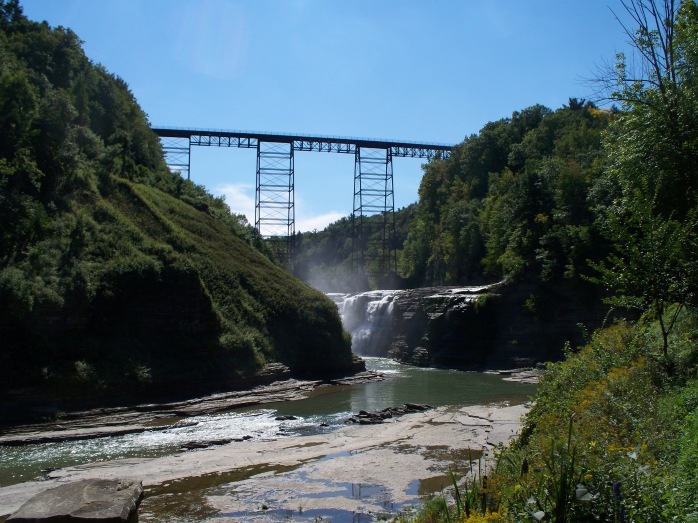 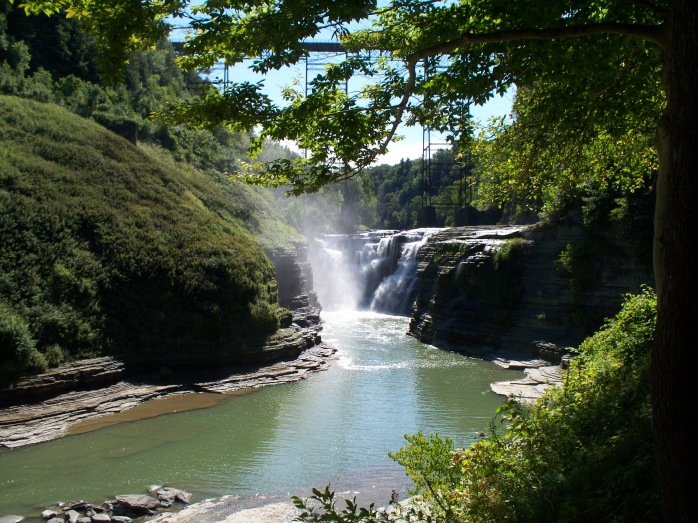 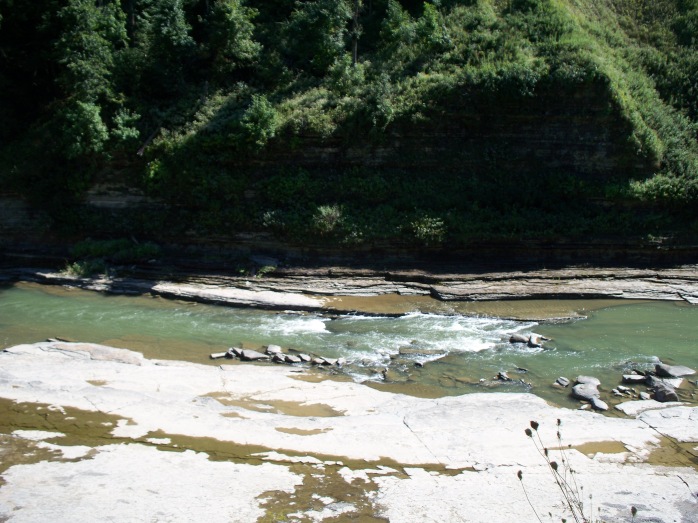 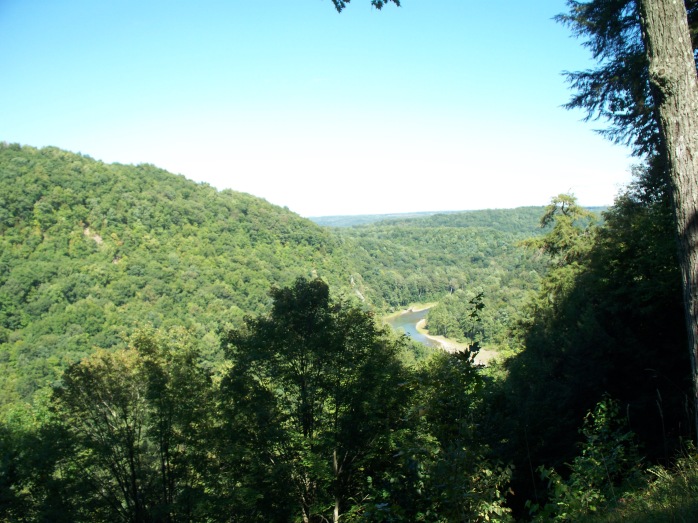 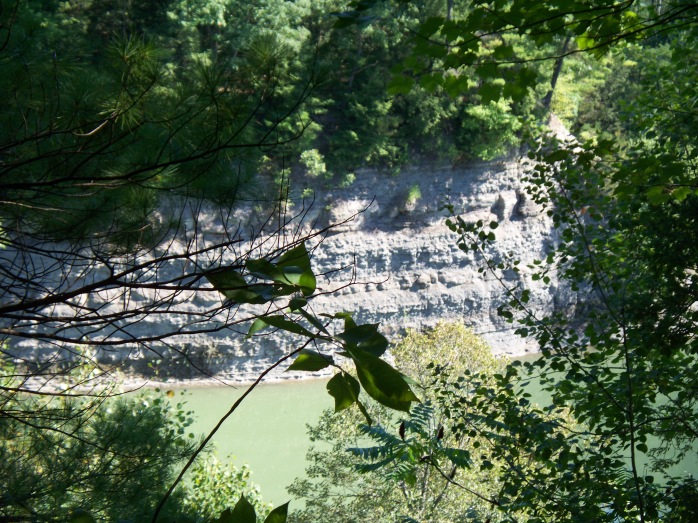 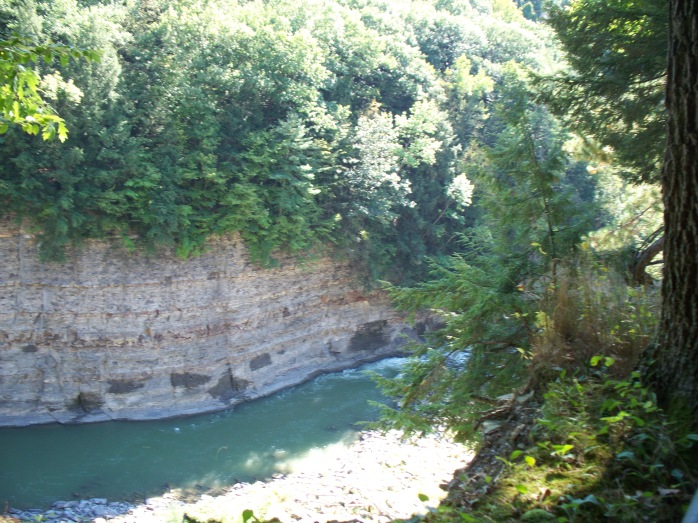 Now, here comes the part about becoming one with nature.  I saw the upper and middle falls and then I followed the signs for the lower falls.  I got to the parking lot, but didn’t see an overlook.  I read the sign and it said “trail to lower falls”.  My first instinct was to get back in the car — two falls are enough, I didn’t really NEED to see the lower falls!  But, I decided to give it a shot and just see what kind of a trail it was and if I could tell how far it would be.  I walked for a while and the trail was fairly flat – some ruts and little ledge-like steps, but not difficult at all.  I walked along the wall where I could look over into the gorge and sat now and then to rest and enjoy the scenery.  I walked and walked and walked and walked — for what seemed like a very long time.  I stopped and listened to see if I could hear the sounds of a water fall in close proximity – nothing!  Then, the trail started to get steep and more ruts and tree roots and steps and my knee was really starting to bother me.  So, I decided to give up and turn around and go back.

Along the trail, I heard and saw squirrels and chipmunks rustling through the leaves and some birds, but not another sound anywhere – just complete peace and quiet.  And, I didn’t see another person – not one!  I was all alone on this trail with nature and critters!  On the way back to the car, my mind began to run wild and my imagination got the best of me!  Realizing I was completely alone, far from the parking area, in the middle of nowhere, out of ear shot of any other human beings, I started to wonder what I would do if I can up on a bear or a snake or, worse, a crazed serial killer lurking in the woods waiting for some stupid woman to wander by all by herself!!!  Just about that time, I caught sight of the parking area and knew I was home free – so to speak!  And that is the end of my time communing with nature……like I said, don’t expect to read any similar stories any time soon!

Here are some shots I took along the trail to the lower falls — but, of course, no photos of the actual lower falls, cause I never made it that far! 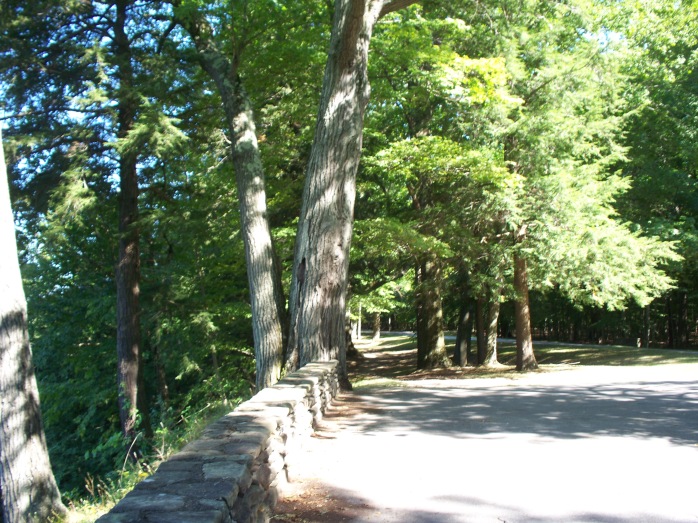 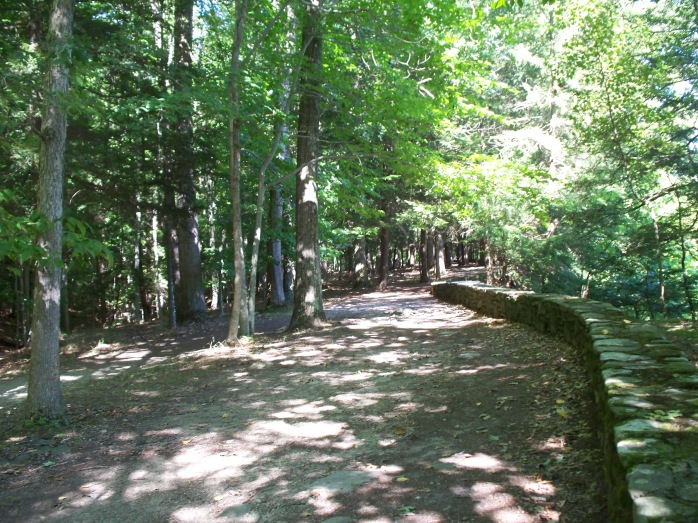 So – that’s my day at Letchworth.  The best part over all?  Lunch at the Glen Iris Inn with the ladies!  The best part of the park?  The area around Glen Iris and the Middle Falls – definitely the prettiest section, for sure!  But, the whole day was amazing and I’m so glad I went and made a day of it!  I sure was tired when I got home about 6:00, though!  I tried to catch up with emails, Facebook, Words With Friends, and write this post, but I pooped out quick!  I went to bed early and slept like a log all night long!  I loved it, though — well worth the time!  Looking forward to the next adventure — wonder what it will be????

← I love my GPS, but…
Memories of Summer Camp →