A Few Days in Hawaii…

I had a wonderful adventure last week!  I fulfilled a dream by taking a little vacation in Hawaii – I joined some friends there and had a wonderful time!!!  It was way too short, but long enough to give me a nice taste of Hawaiian culture and incredible views!  We stayed on Oahu right at Waikiki Beach — it was great!!!

Here is a diary of my adventure and some sample pictures:

I got up at 3:00 am to make a 6:00 am flight out of RDU.  It was 3 hours from here to Houston, an hour and a half lay over, and then 8 hours from Houston to Honolulu.  Then, of course, I also “gained back” 5 hours by skipping time zones!  So, I arrived in Hawaii at 2:00 pm.  I assumed that I would be totally wasted and not able to do much that first day, but I was flying on adrenaline!!

The shuttle driver from the airport to the hotel was a real “surfer dude” type.  He said he lived in Winston-Salem for a while and did a couple semesters at Wake Forest.  But, he is a west coast kinda guy and couldn’t stay here very long!  Too bad – NC’s loss – what a cutie!  ha-ha

I got settled into the hotel – the Queen Kapiolani on Waikiki Beach.  Very nice location – just a block from the beach!  Here is the hotel and the view from my room – I had a view of Diamond Head and partially of the ocean. 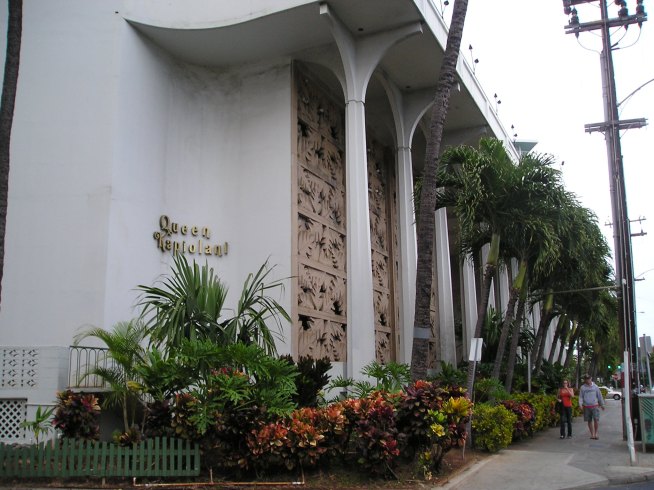 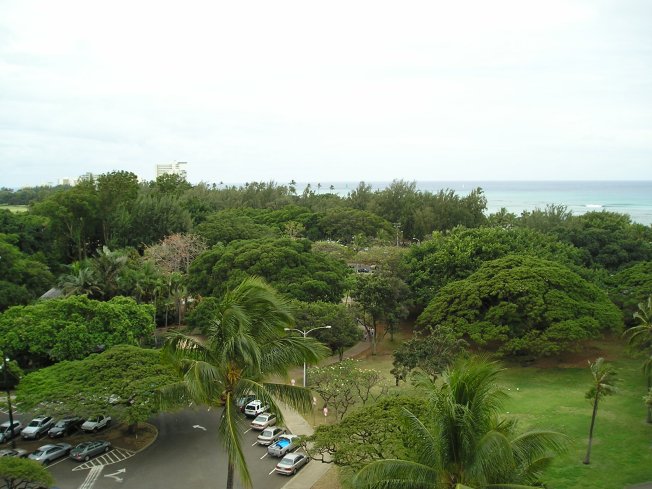 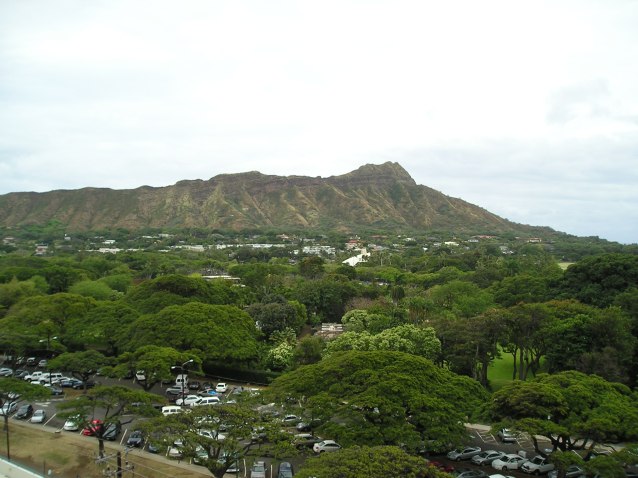 We went to one of the MANY ABC stores – there is one or two on every block!!!!  ABC stores are not what they are here in NC – our ABC stores are liquor stores – in Hawaii, they are convenience / gift stores!  Lisa and I got flower barrettes for our hair and we got a stack of cheap t-shirts to bring back for gifts for family and friends (6 for $20.00!!!).  We talked about going to the zoo, which was right across the street from the hotel, but I was running out of steam so we decided to just go back to the hotel and plan the rest of our trip!

We stopped in at the tour desk and booked tickets for a “whale watching” cruise and a day at the Polynesian Cultural Center.  Day one was done!

Day two was devoted to whale watching and exploring!  Ron and Lisa actually started the day MUCH earlier than I did.  I got up fairly early and when I called to see if they were ready for breakfast, they said they were hiking and were almost to the top of Diamond Head and would be back soon!!!  They told me all about the grueling hike and the beautiful views over breakfast – here is a sample of the photos they took on their hike:

They took this for me cause I have a “thing” for lighthouses!!!

When they returned, we had breakfast in the hotel.  Then we walked to the beach and looked around and took some pictures.  We walked out onto a pier – it was so warm and windy (but a little cloudy) – what a great day!  Here are some beach pics. 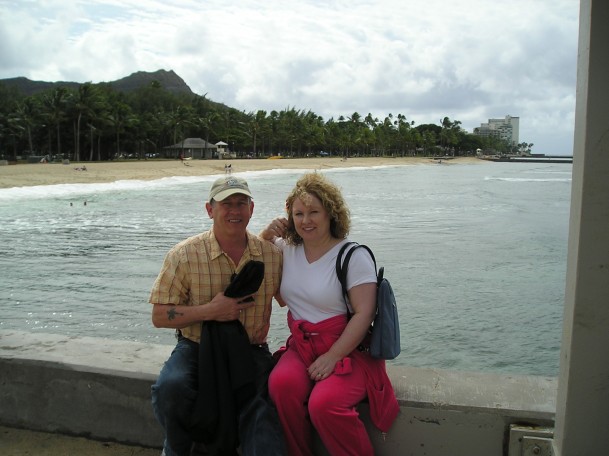 We picked up the shuttle to the whale watching cruise about 11:00 am.  This is a day cruise that guarantees whale sightings and they didn’t disappoint!!!  We had a very nice buffet lunch on board while the captain cruised to where the whales are.  Then, we went out onto the decks and looked for whales.  The whales travel from Alaska to Hawaii to give birth in the warm waters.  They stay in the area from around Dec to April to let the babies get strong enough to travel back to Alaska and stand the cold waters.  The sightings are very exciting!  We would first see a “blow” – water shooting up out of the water like a geyser – then their backs would arch up out of the water or they would roll and lift their front fins out of the water – then their huge tails would come up out of the water and expand!  When we would have a sighting (and there were MANY), everyone would ooooh and aaaah and scream out in delight!  The problem was that it would happen so fast that it was very difficult to capture it on camera – so we weren’t sure if we got any good shots until we downloaded them when we got back to the hotel.  We looked at about 100 pictures we took between us and were just about convinced that we were not lucky enough to get a good shot!!!  And then, there it was — the perfect picture!!!  Ron was the lucky one who got the shot – here it is – the one of the fin fully expanded!

When we got back from the cruise, we walked a few blocks to King’s Village and the International Marketplace to do some shopping.  Both were great places to go – lots to see and lots available to buy!  We got a few things and headed back to the hotel.  The following shots are from our shopping excursion: 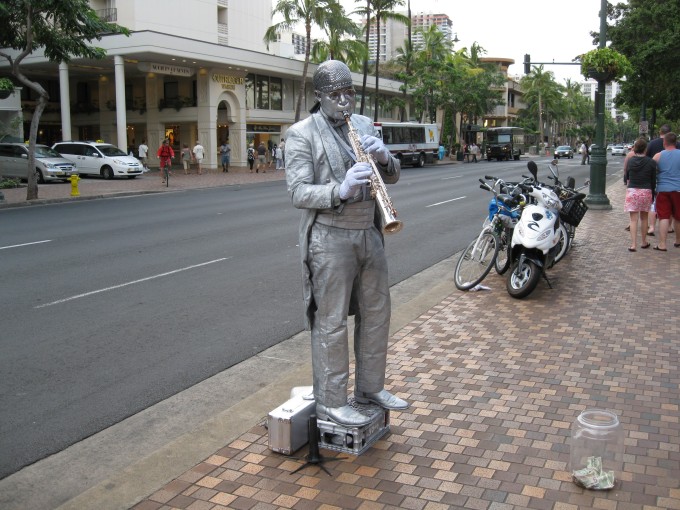 We went back to the hotel, had dinner, and crashed!!!!  It was a long and FULL day (especially for Ron and Lisa cause they started out climbing a volcano before breakfast!).

My day actually started with a view I wished I hadn’t seen….. after my shower, I got on the phone to make a few calls.  While I was on the phone, I was pacing back and forth from inside and out onto the lanai and back inside – the exterior of the hotel is an “L” shape on the side my room is on – on one of my trips out onto the lanai, I turned towards the wall of windows to my left and just as I did, a man opened his curtains and he was standing there totally naked!!!  It was a BIG window, so he was exposed from the knees up!!!  Talk about “ugly naked guy” – it was not a pretty sight!  Sorry – no photo of this scenery – not exactly what I wanted to capture for my album!  ha-ha  As soon as he saw me, he shut the curtains — but, the damage was done – I will always associate the lanai in that room with the ugly naked guy across the way…..

The day seemed to be doomed for us — after the ugly naked guy sighting, we had breakfast and then sat in the lobby waiting for the shuttle to go to the Polynesian Cultural Center.  My phone sounded off with the little tune that signifies an email, so I pulled it out to see what it was.  It was a “breaking news” email from the Facebook notification that the Sanford Herald sends with news.  I opened it up and gasped when I read the headline – I felt the color run out of my face!  Ron and Lisa asked what was wrong and I tried to tell them it was nothing, but it obviously WAS something, so when they pressed, I said “I’m not going to tell you” — well, that made things worse!!!  So, I had to tell them – Transmatic announced they are closing on April 3rd — Ron works at Transmatic!!!  UUUGGGHHH!!!!  He made a couple calls and tried to not let it upset him and ruin his day — but, man, I felt horrible!!!

The day picked up, though…..the bus ride to the Polynesian Cultural Center was about an hour and a half long.  Our tour guide – Cousin Billy – made the trip a blast – it didn’t feel like and hour and a half at all….. Here are some shots of the country side on our way to the center: 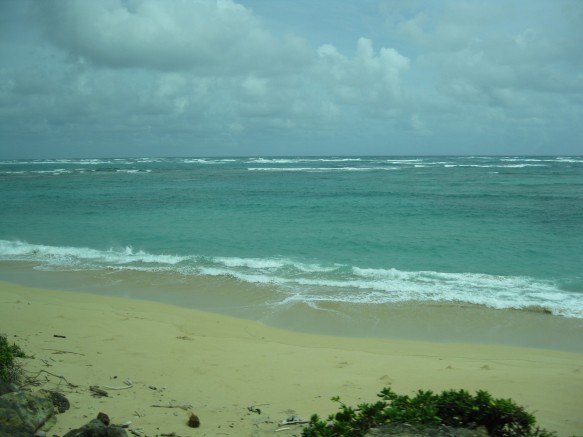 The above photo is of the North Shore 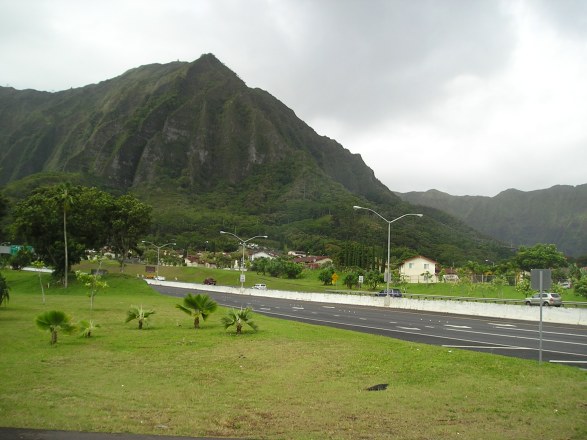 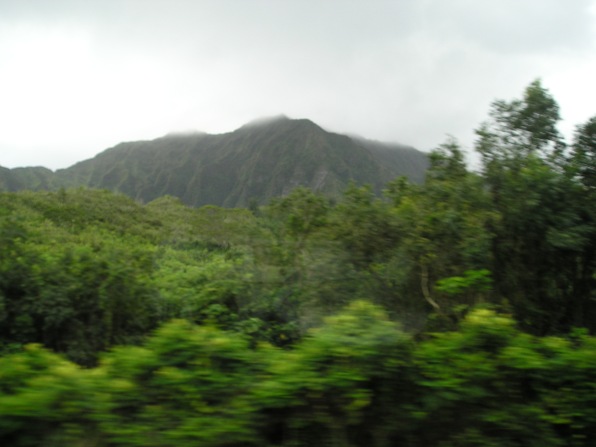 This was a HUGE pet cemetery!!!  The whole island is very “pet friendly” – we saw people walking dogs all over the place – beaches, streets, everywhere!

We arrived at the Polynesian Cultural Center and it was FANTASTIC!!!!  We took a guided tour with Cousin Billy and had the best time!  The tour included seeing the cultures of all the different Polynesian islands – Hawaii, Fiji, Samoa, Tahiti, and others….. we saw hulas, native musical instruments, coconut tree climbing, watched a canoe pageant, took a hula lesson, and so much more!!!  The day was capped off with a wonderful Luau and a fabulous night show…..here is a small sampling of the several hundred photos we took between us: 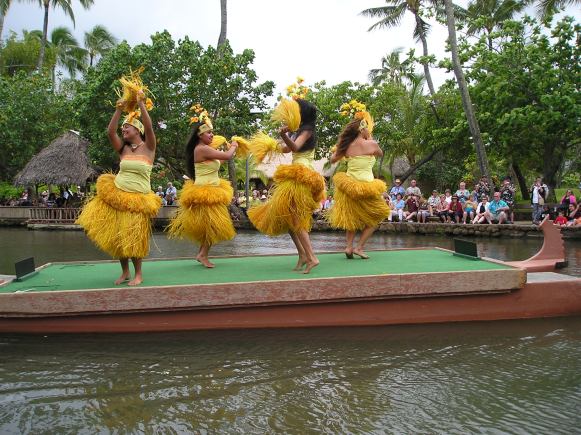 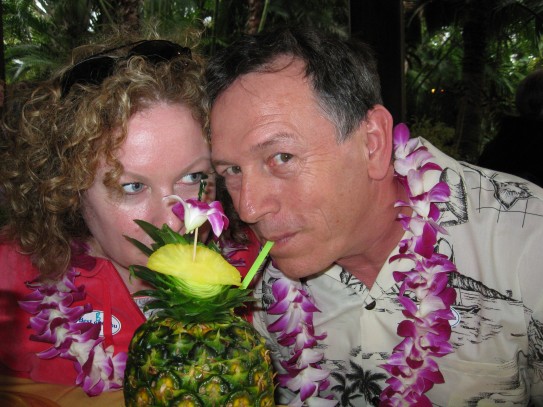 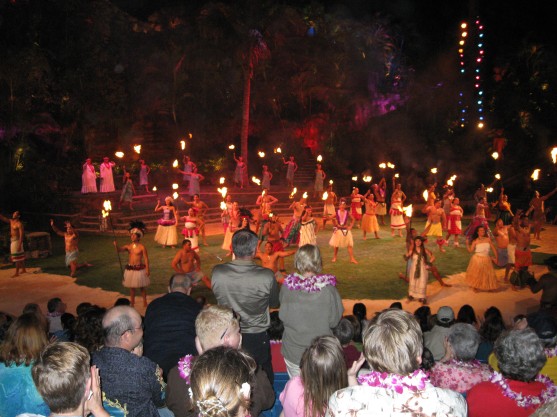 My last day — I decided to just bum around because I had a LONG flight ahead of me.  I went to the beach and wandered around some.  I took some pictures of the Banyan trees across from the hotel – they were fascinating!!!!  There is a large homeless population and they live in the “caves” of the Banyan trees! 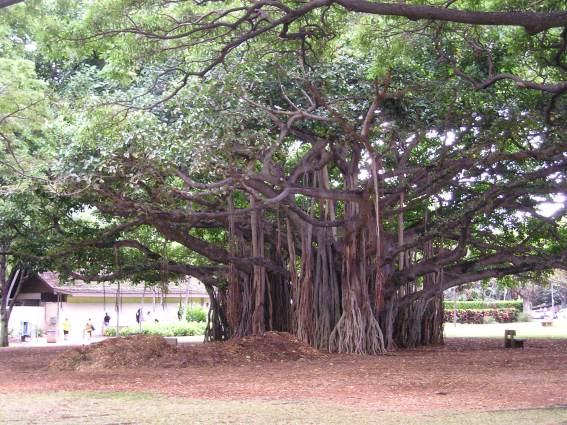 The flight back was LONG — not any longer in actual hours than going down was, but we lost all those hours that were gained on the way down — the flight was 8 hours from Honolulu to Houston, a 3.5 hour layover in Houston, and a 3 hour flight from Houston to RDU — AND, in addition to the 5 hours time difference, it was also the night we turned the clocks ahead for daylight savings time!!!  So – I left Honolulu at 7:30 PM Saturday, arrived in Houston at 7:30 am Sunday, and then arrived in Raleigh at 2:30 pm Sunday afternoon!!!

I rushed to Sanford to pick the girls up from their adventure at Rae-Zor before they closed at 4:00, came home, and worked to adjust to being back in reality!!!

Ron and Lisa arrived two days before me and stayed two days after I left — some of the things they did that I didn’t do was go to the Pearl Harbor Memorial (I didn’t think I’d be interested in that, but after I saw their pictures, I wished I had planned to do it with them), they hiked to the top of Diamond Head, went to a nearby bay to swim, and Ronald took an airplane ride around the island!

I would like to go back some time when I have more time to spend — but, next time, I think I will plan an island hopping package and spend a day or two at each island to see more than just Oahu!  Maybe if I hop around, I might find Frankie and Annette or Gidget and Moondoggie – cause they weren’t on Oahu!!!

That is my vacation…….what a wonderful adventure!!!!   Now I’m tired and really bummed to have to reenter the real world…….ha-ha!

Category: All About Me, Friends, Sentimental, Vacation

3 Comments on “A Few Days in Hawaii…”