All good things must come to an end…..and so did my Hawaiian Cruise! Over the next four posts, you can relive my wonderful adventure with me…..since I posted them in order, they appear in reverse…..hhhmmm – I should think of something funny or philosophical about that, but it’s late, so my brain won’t allow it! hehehe

I am so blessed and happy to have been able to do this trip – it really was special! How can I sum it all up? Well, for one thing: I’m sure I’m not the first to say this and, for all I know, it may even be an official motto somewhere, but I am declaring Hawaii the “Land of Waterfalls and Rainbows”! In the seven days I spent in paradise, I saw more rainbows and waterfalls than I’ve ever seen in my life and it was heavenly! While each island is distinctly different, this was a common theme on all of them. When I think of Hawaii, I think surfing and beaches and big waves. Yes, there is definitely a lot of all of that. But, there are also beautiful drives through the country side with every shade of green imaginable, stunning canyons and cliffs, and a year round rotating growing season that ensures some kind of fruits and florals will be plentifully in season whenever you are there. It is truly paradise on earth!

On our last day, we pulled in to Honolulu on Oahu to end the cruise. I walked the gangway to leave the ship for the last time about 9:00 am, gathered my luggage from the security area, and got on a bus for one last tour. My return flight was scheduled for 9:30 PM, so I had all day on Oahu – I chose a full day tour that went all over the island and ended at the airport. The day ended up being long and mostly boring, but it served the purpose of killing time and giving me a final few hours to stretch out my enjoyment of the beauty of Hawaii! The tour was OK and the guide was good – his name was Tommy Chong, believe it or not!!! LOL He told us he got to meet the real Tommy Chong and Cheech once and showed us a photo of him with them. The tour was 8 hours of mostly driving with pointing out drive by points of interest and a few stops and a really crappy lunch. But – I did see some beautiful sights and got to enjoy some more Kona coffee and Macadamia nuts at a Macadamia nut farm!!! I was most looking forward to the Dole Pineapple Plantation – the main reason I chose this particular tour, but our stop wasn’t enough time to do the train tour, so we really only got to do the gift shop and have a treat of some kind – I had a cup of fresh pineapple that was amazing!!! So not a totally bad day, but really wish I wasn’t trapped on that bus so long! LOL Most of the photos on this post aren’t as good as the other posts because a lot of them were taken through the bus window as we drove by! Oh well…..better than no photos, right? 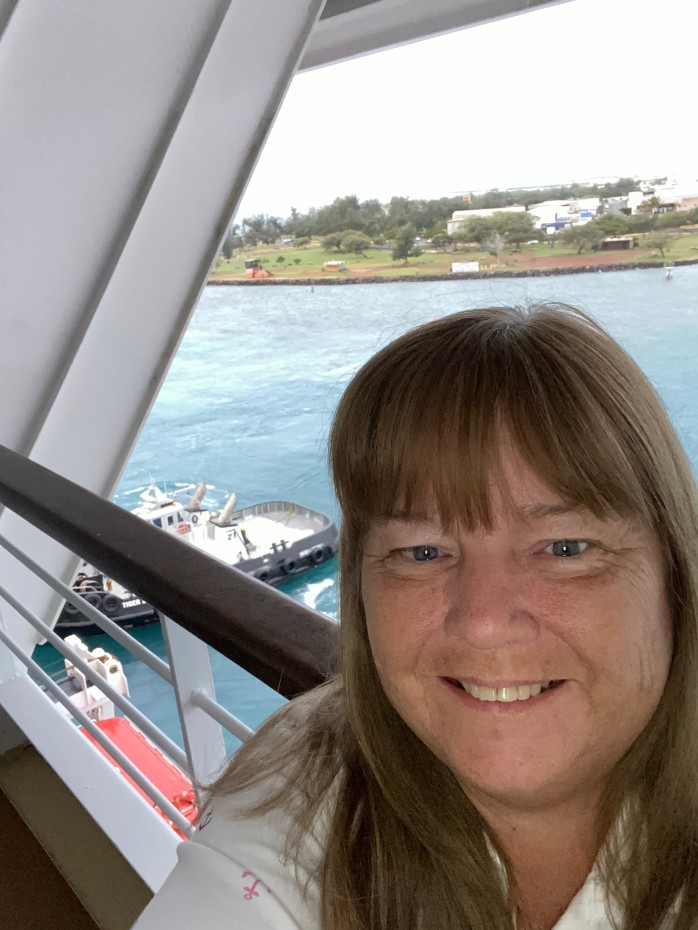 My last Daily Balcony Selfie before I left my cabin for the last time!

While I was on my balcony doing my selfie and having some breakfast, I saw this!

Never underestimate the little guy or think you can’t cause you’re too small or not strong enough……just look at this little tug boat working to pull this big freighter into the harbor safely……if it weren’t for tugs, the big guys would never get to the dock!!!! Think about that!!!!

We were told that this hotel has exclusive contract for the filming of hotel scenes on the current Magnum PI TV show!

A lot of the sites we saw on this last tour were related to either Magnum PI (current or the Tom Selleck version) or Hawaii 5-0 (again, current or original versions)! 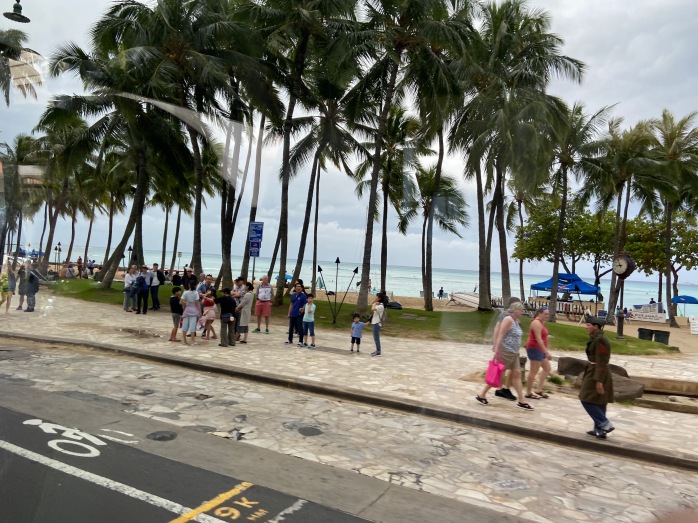 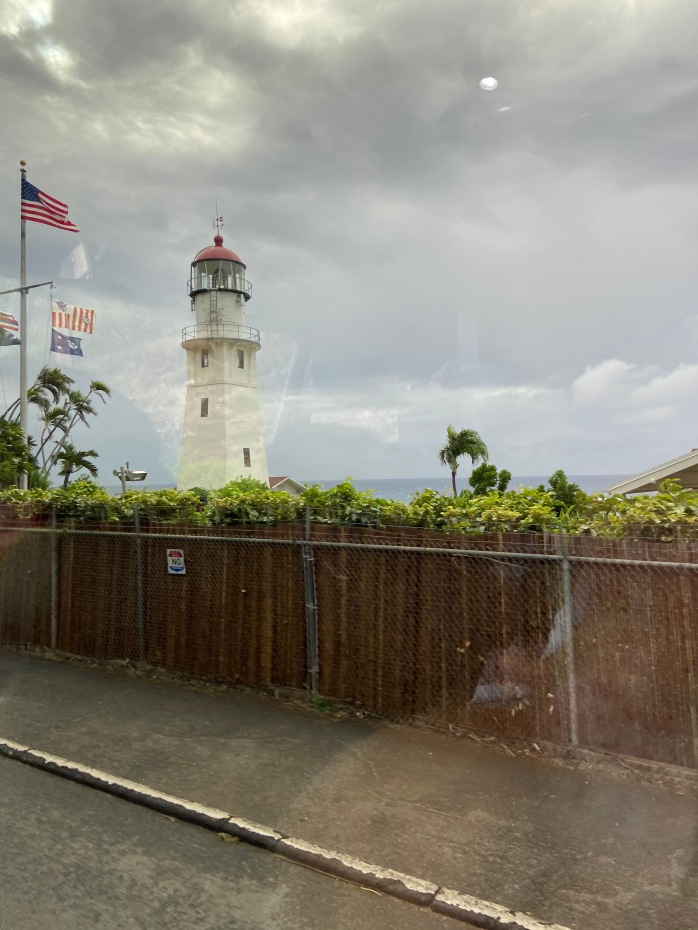 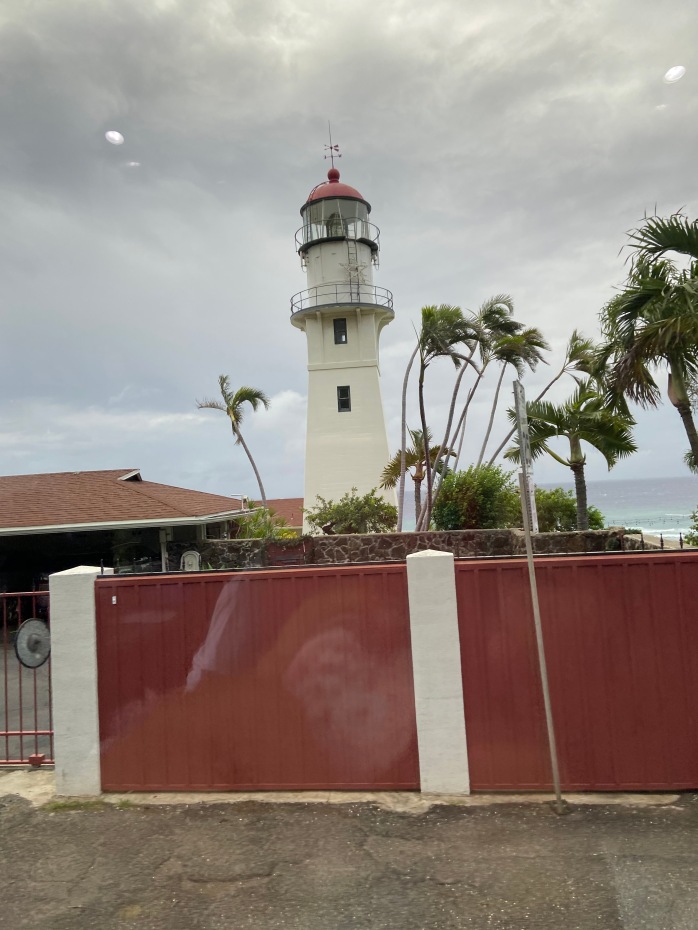 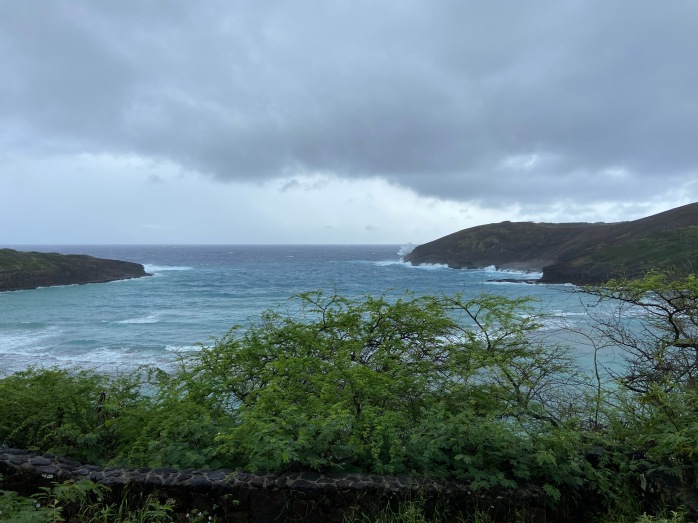 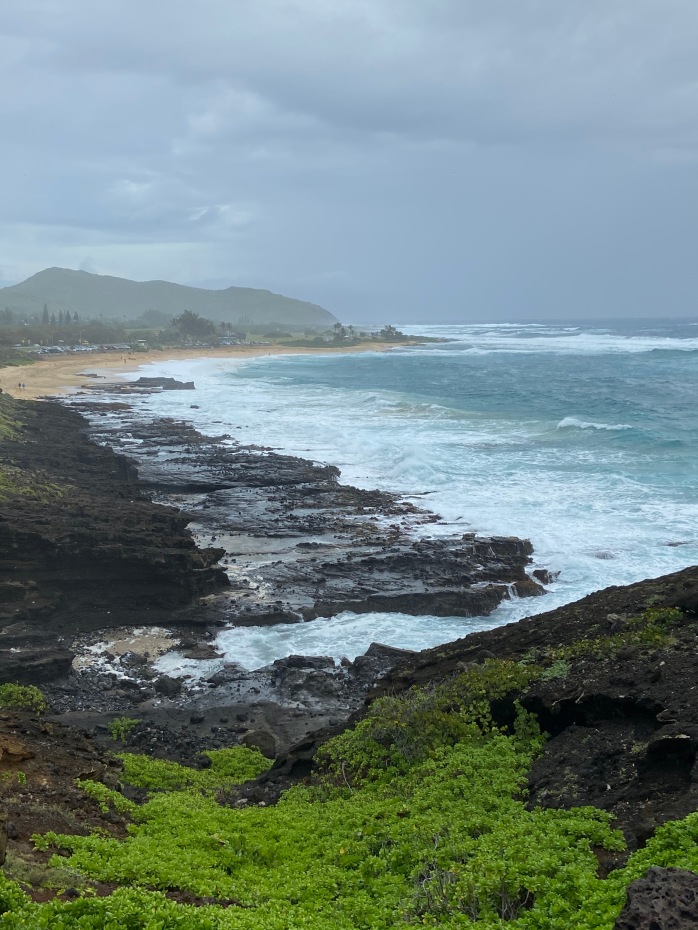 This is the beach where the famous love scene in the movie From Here To Eternity was filmed — doesn’t look as romantic as it did in the movie, huh?

Yep – much more romantic in the movie!!! LOL 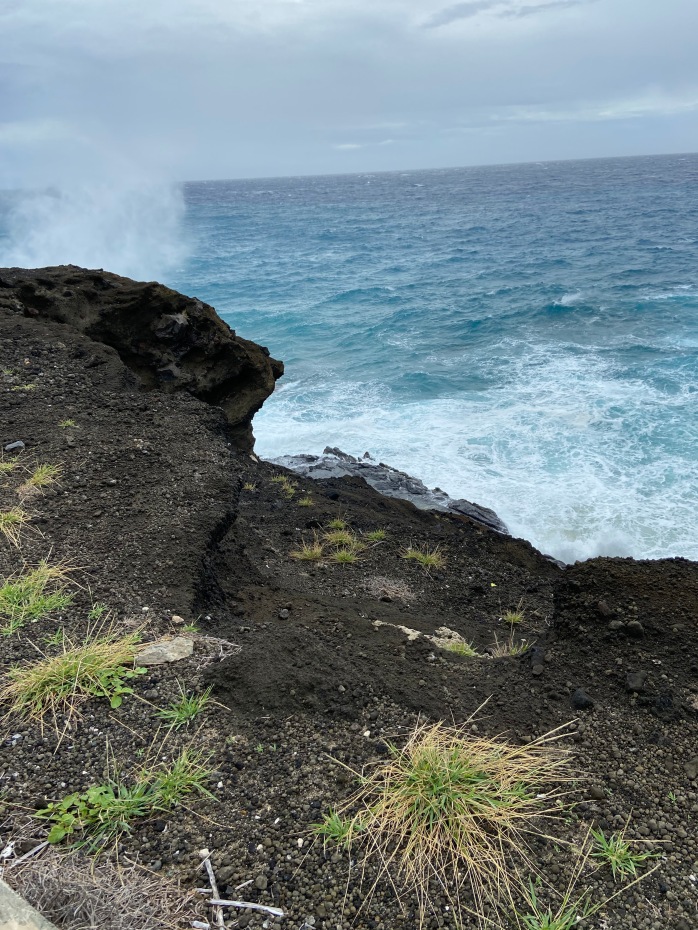 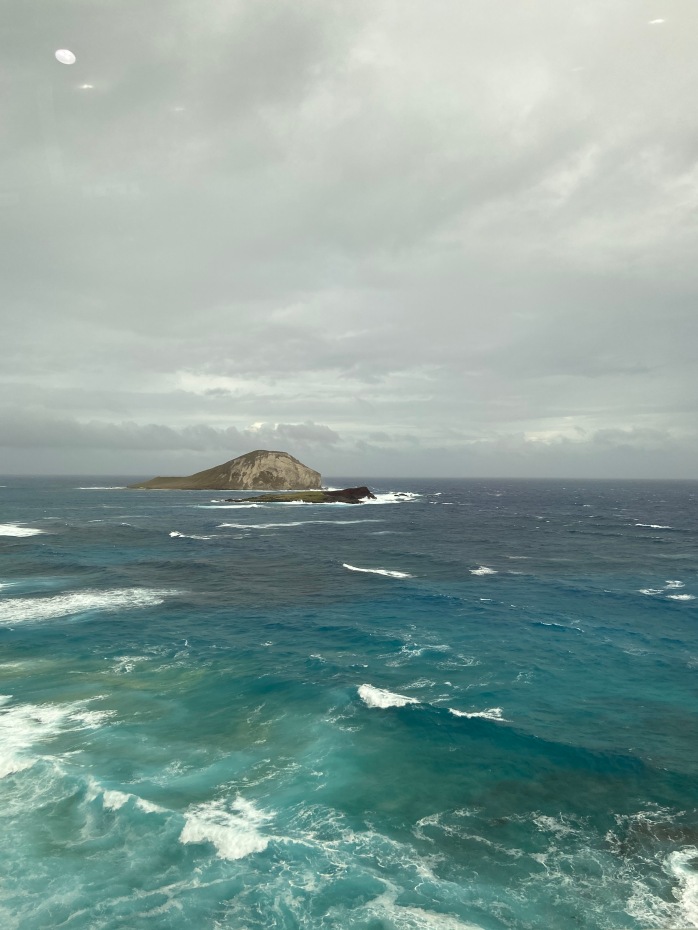 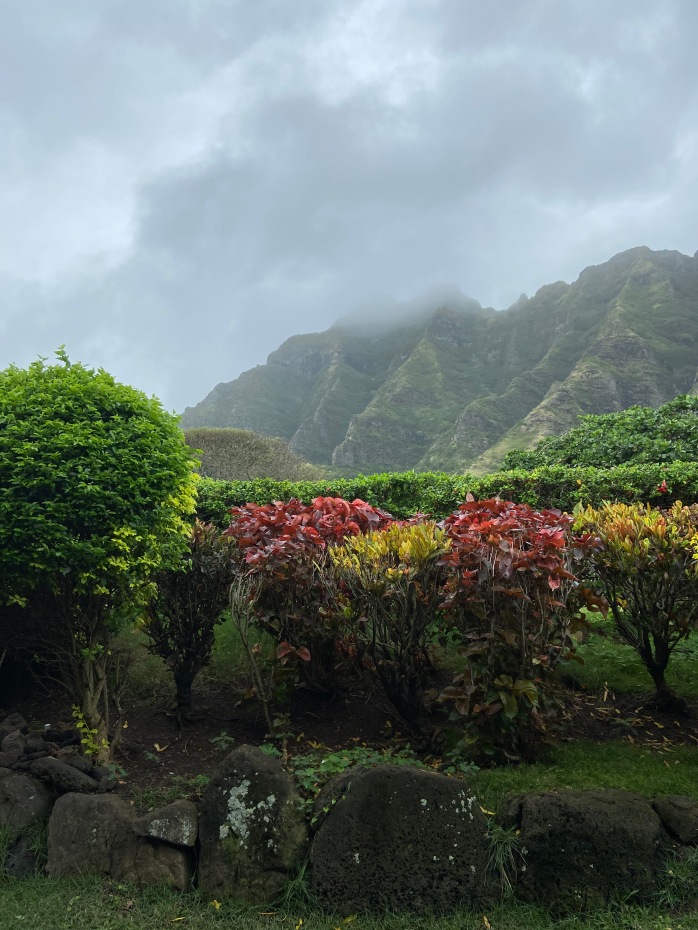 This was at the entrance to a Macadamia Nut Farm where we got more free samples of those awesome nuts AND more free 100% Kona coffee…….I had a couple cups, knowing it will probably be the last time I ever have any…….back to tea for me, unless I either return to Hawaii or find the occasional opportunity to see if it tastes as good off island!

I think this was a government building of some kind……. 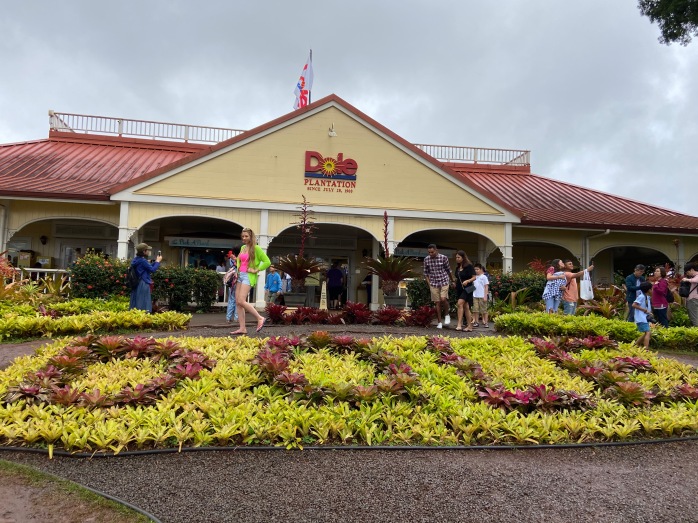 The Dole Plantation…….sure wish I could have taken the train tour to see the pineapple fields! 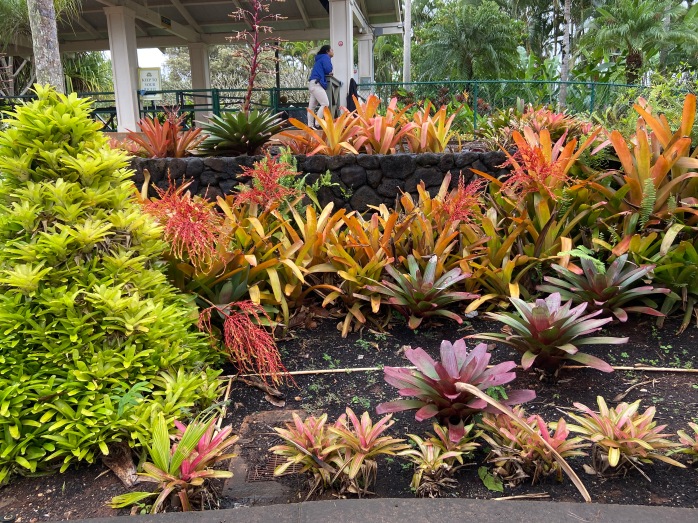 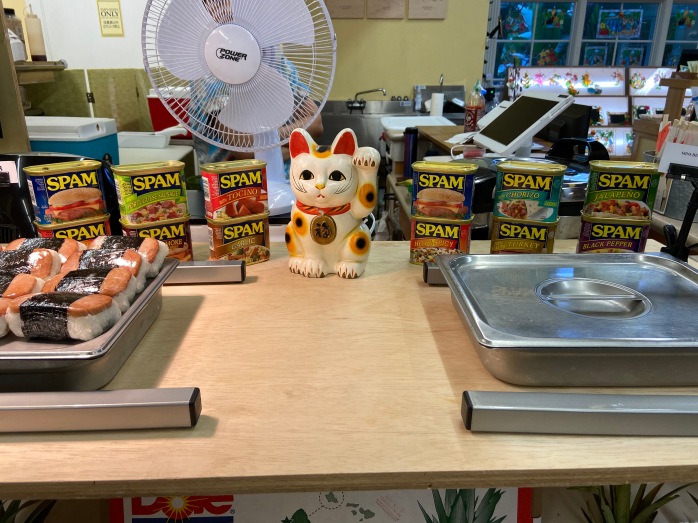 Spam is very popular in Hawaii — they eat it with everything!!! There are many different varieties and flavors of Spam – who knew? AND…..that tray of bars on the left side is actually SPAM SUSHI – packed rice between two pieces of Spam…….I don’t get it, but to each his own, I guess!

I was intrigued by this banana flavored cotton candy display — not enough to buy any, but it still caught my eye!

I bought this huge cup of fresh pineapple at the plantation — it was soooooo good!!!

These are rainbow (something) trees —- so beautiful!!! I was told the bark starts out brown and peels to this rainbow color and then barks over, again, and peels, again…..and so on!

I finally got on the plane for home…….first leg was overnight to LA……then a long flight to Chicago……then on to Buffalo! I left Honolulu at 9:30 PM on Saturday and arrived in Buffalo at 6:30 PM on Sunday……of course that takes into account all the time changes, since Hawaii is 5 hours behind us here on the east coast.

I gave in to one silly character photo……gotta get at least one on every cruise, right? 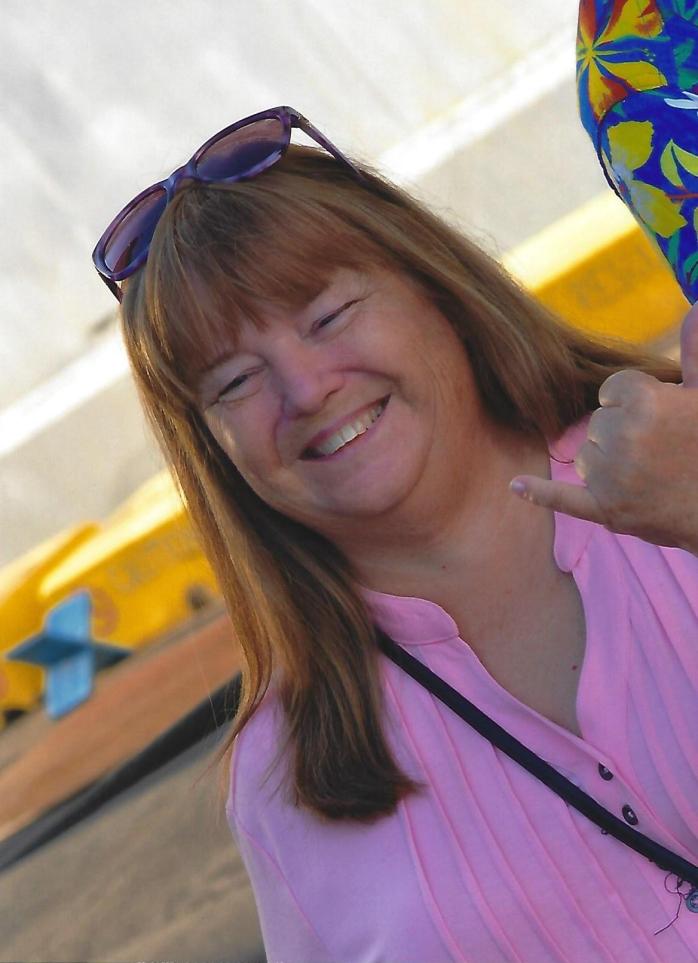 Yep, I kicked off the new year and the new decade with a big bang……but, for now…….Aloha, Hawaii……till we meet, again!!!