Over the last couple of weeks, I finished work on a HUGE Bucket List item…..one I’ve been working on for the better part of my life, but more diligently since I retired in 2011. It was a long time coming, but I’m DONE! I have now visited ALL 50 states plus the District of Columbia!!! I have also seen all five Great Lakes, both oceans that border the US (Atlantic and Pacific), both gulfs that border the US (Gulf of Mexico and Gulf of Alaska), four major state named rivers (Mississippi, Ohio, Missouri, and Arkansas), and both countries bordering the US (Canada and Mexico)! I was able to completely color in the state map (except for Cuba and Russia, which are shown on the map…..maybe someday I’ll color them in, too)!  The two “orange” colored states are states I actually lived in – NY most of my life and NC for 26 years in the middle. 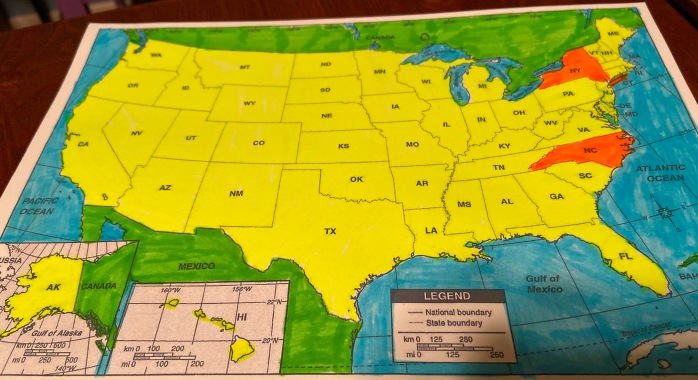 Some states I traveled to through my younger years and some I traveled to for work, but the majority of them were all visited since I retired. Some I flew to, some I cruised to, some I traveled to/through by train, and some I traveled to/through by motor home or automobile! My criteria for considering a state could be colored in and “counted” was: I had to either spend at least one night and/or spend significant time in the state and see or do things the state has to offer. So — layovers in airports didn’t count and flying in for a meeting and flying out same day didn’t count, either! But, driving for several hours through a significant portion of the state and stopping to see/do things that caught my eye did – even if I didn’t spend the night. Many states I have been to multiple times and most I spent multiple days doing as much as I possibly could on at least one trip. I do have a short list of states I want to go back to either because I didn’t feel I did my visit justice or it has been many years since I was there or there is something I really want to do there that I wasn’t able to for whatever reason. Those states are: Texas, Tennessee, Iowa, Vermont, Hawaii, and Montana. Utah was on that list, as well, but I was able to knock it off on my last trip by spending quite a bit of time there on a tour while in New Mexico.

This year, my goal was to color in the last three states – Kentucky, which I visited in August and loved – and Colorado and New Mexico, which I visited the last week in September and the first week in October. Here I am at the Four Corners Monument – the only place in the US where four states physically border each other – Colorado, New Mexico, Utah, and Arizona – I am standing with one foot in Colorado and one foot in New Mexico – my last two states!

So, now I can wear this shirt with pride……I feel like I accomplished something truly amazing……I am a Charter Member of the “50 and Done Club”! 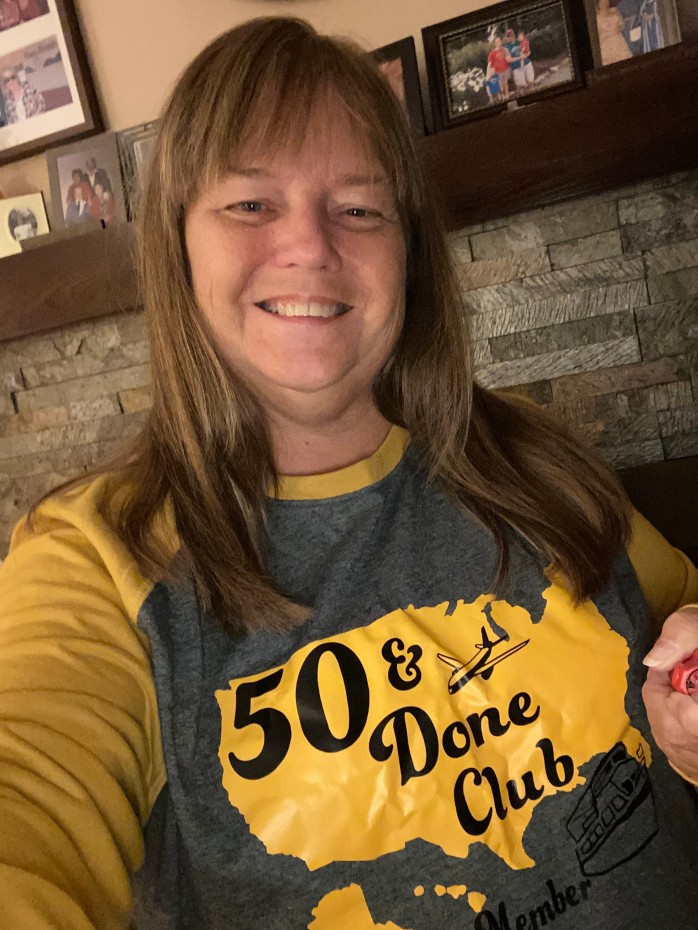 So, what now? Well, I have a pretty good start on some of the countries in our world – I’ve been to Canada, Mexico, Bermuda, Jamaica, Bahamas, Portugal, Ireland, and England! So, I think it’s time to start expanding that list some and there are a few other Bucket List items that will help with some of the states I’d like to return to and there are also some favorite spots I’d love to see again! So……..my traveling (and adventure blogging) days are FAR from over!!! Let the adventures continue and get better and better!!!

And, speaking of adventure blogging…….I’ll be starting posts from my Colorado and New Mexico trip soon!!!