I had booked a tour bus trip with a travel group I belong to a couple years ago to go to the Ark and the Creation Museum – the trip was canceled, so I took the refunded $ and booked my flight to Iowa in the same days I had allocated to the canceled trip. So, when I was planning this trip, I knew I wanted to include the Ark, if I could…..so, I did!

The Ark Encounter is in Williamstown, KY and is a life size replica of Noah’s Ark built to the specifications detailed in the Bible. The largest timber frame structure in the world sits on 200 acres and it spans 510 feet long, 85 feet wide, and 51 feet high, and consists of 3.3 million board feet of timber. There are three levels of exhibits, including information about the ark and Noah’s story before the flood and on the ark, animal quarters, living quarters, rooms to grow plants for food, and much more! It opened in July 2016. In addition to the Ark, the site has restaurants, gift shops, a zoo with animals that would have been on the ark, zip lining, and other activities that are both fun and educational. There is also a Creation Museum in nearby Petersburg, KY that I didn’t include in my adventure, but I hear it is equally impressive.

The property is HUGE and a LOT of walking – luckily, there is a shuttle from the parking lot to the main entrance, I got my ticket on line so I didn’t have to stand in line, there are elevators and lots of places to sit along the way, and there are motorized carts you can rent that go everywhere (wish I had taken advantage of that – my knee was totally shot that day)! I had heard that it is best to go in the afternoon and on a weekday cause the crowds are less — that proved true — there were a lot of people, but it didn’t seem crowded at all and I didn’t have to wait in any long lines and the benches were usually free to sit on when I needed to give my knee a rest. 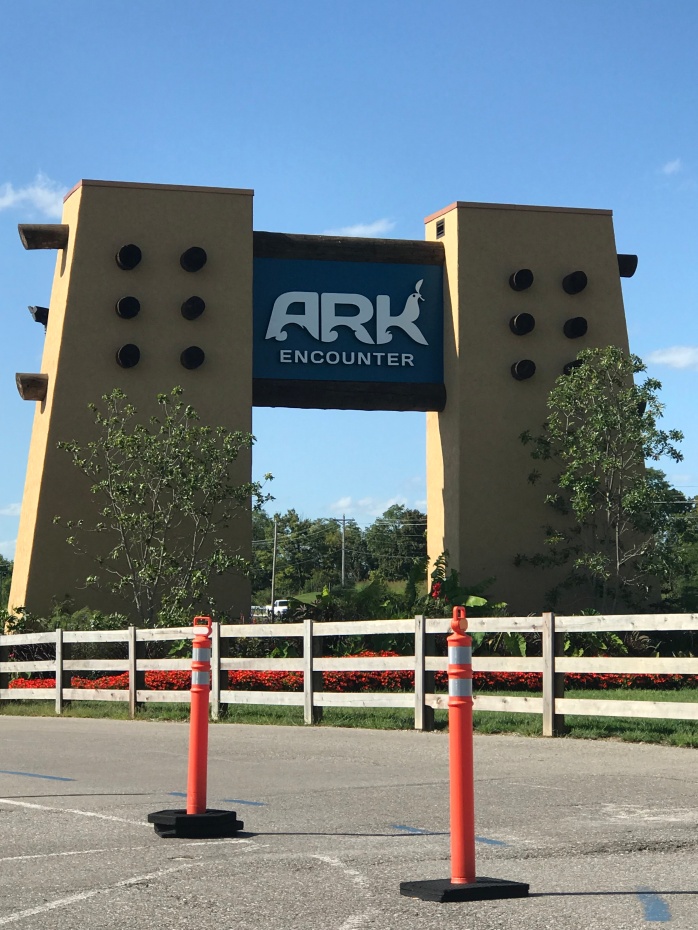 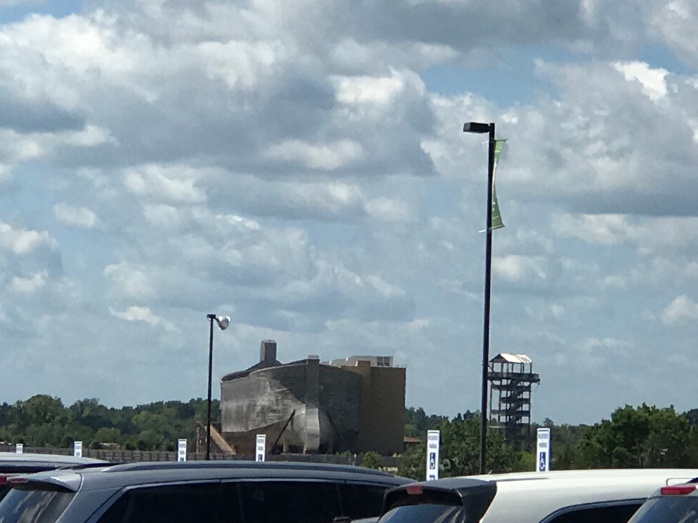 View from the parking lot…… 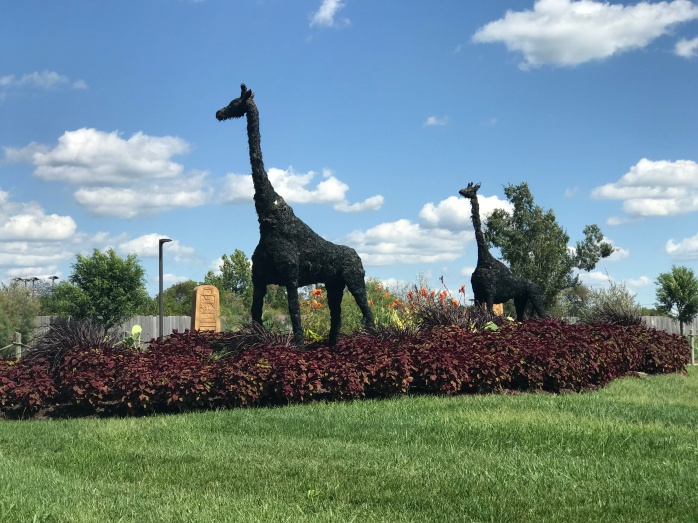 I arrived just after lunch – I spent the morning at Cave Hill Cemetery and then it was an hour and a half drive to Williamstown – so, my first stop was the restaurant for the buffet lunch.

Then, since animals are always my priority, I headed to the zoo……I was a little disappointed in the zoo – they had some nice animals, but not as many as I had hoped. The petting zoo only had goats and there were a bunch of kids in there, so I skipped it. 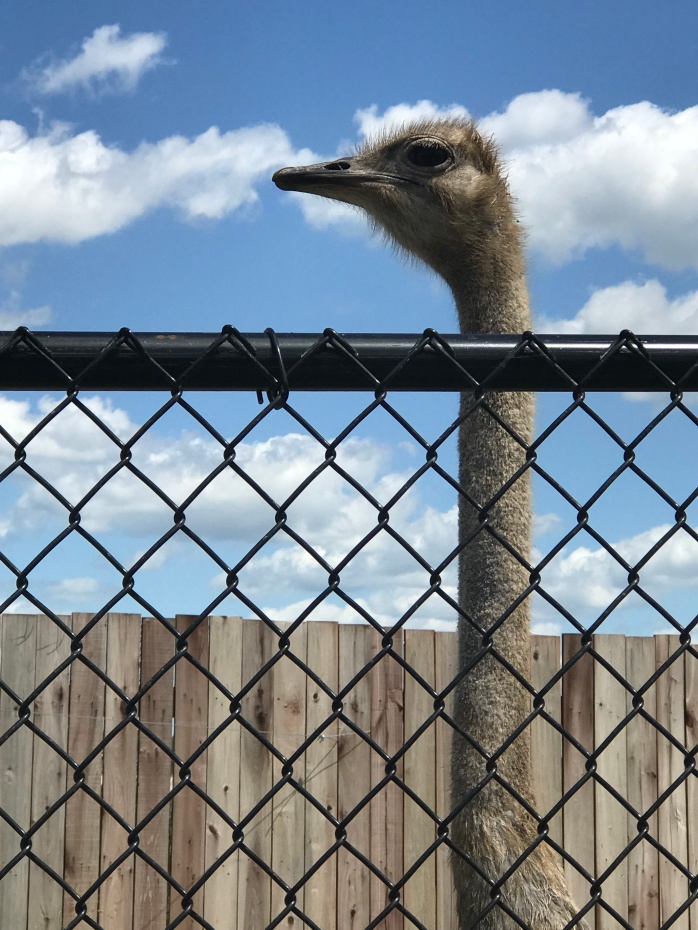 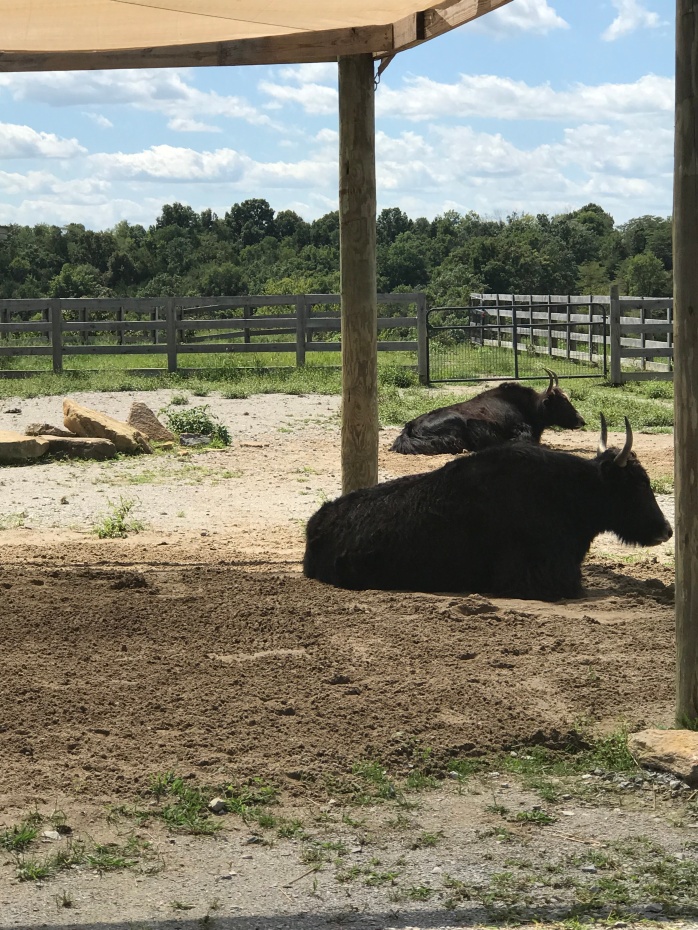 I did enjoy the “Walk-About” area where you can walk among the kangaroo — we were instructed to stay on the paved path, but if a kangaroo came onto the path, we were permitted to pet it – unfortunately, none came up to us while I was there……I was so disappointed! One did hop across the path, but it didn’t stop for a pet! It was still a big thrill to be so close to them and anticipate the chance to pet one! 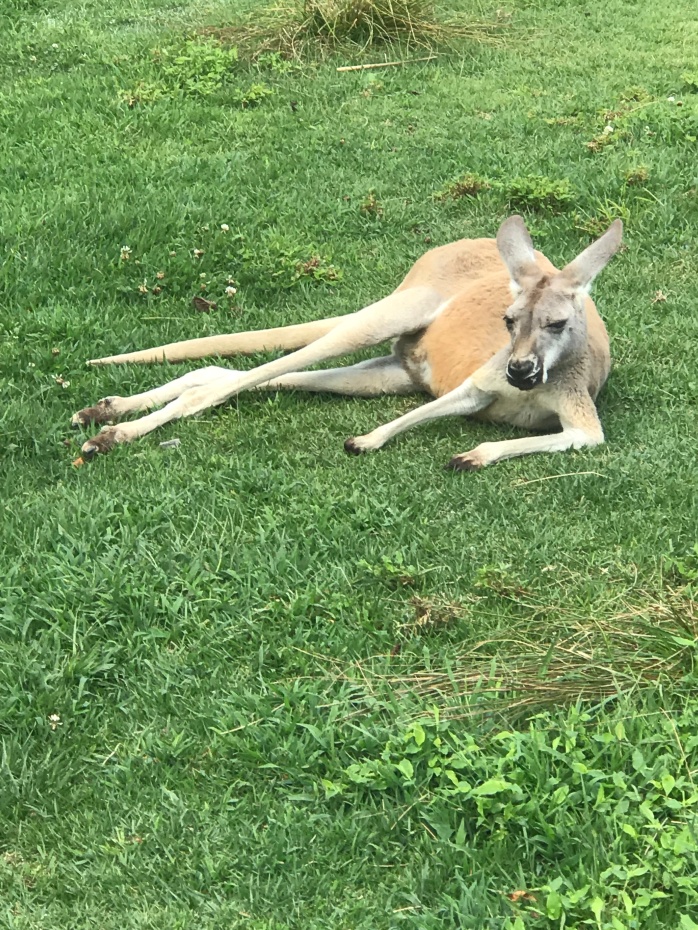 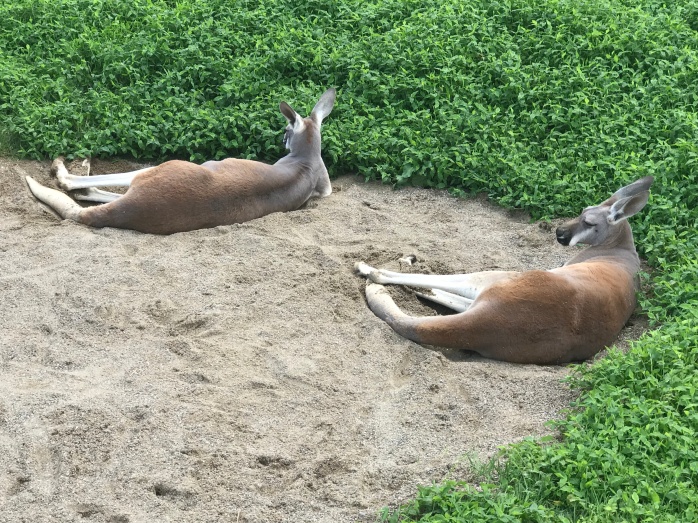 They had other animals, too, but I didn’t get any good photos of them. They also had camel rides — I was so looking forward to riding a camel, but decided against it. They made it very easy to get on them, but I watched some that were about my height and it looked like they had to bend their knee to a point that looked like mine wouldn’t do well, so I decided to not risk making an already aggravated knee worse. So, I watched others ride for a while and then had the pleasure of offering to pay for two sweet kids and their Mom to ride (long story, but I felt compelled and was so glad I did)……they were so happy and that made me happy!!!

Then, I toured the Ark — WOW — impressive is an understatement! I was glad for the elevators and benches — it took me a little over a couple hours to do all three floors and read most of the exhibit information. I really enjoyed it and am glad I put it on my list of things to do in Kentucky! 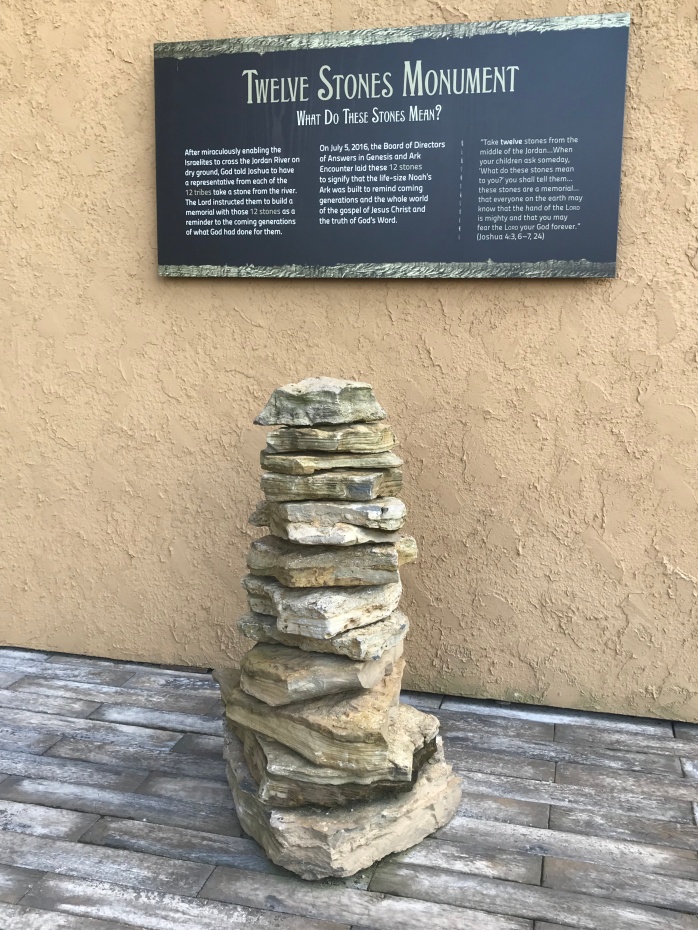 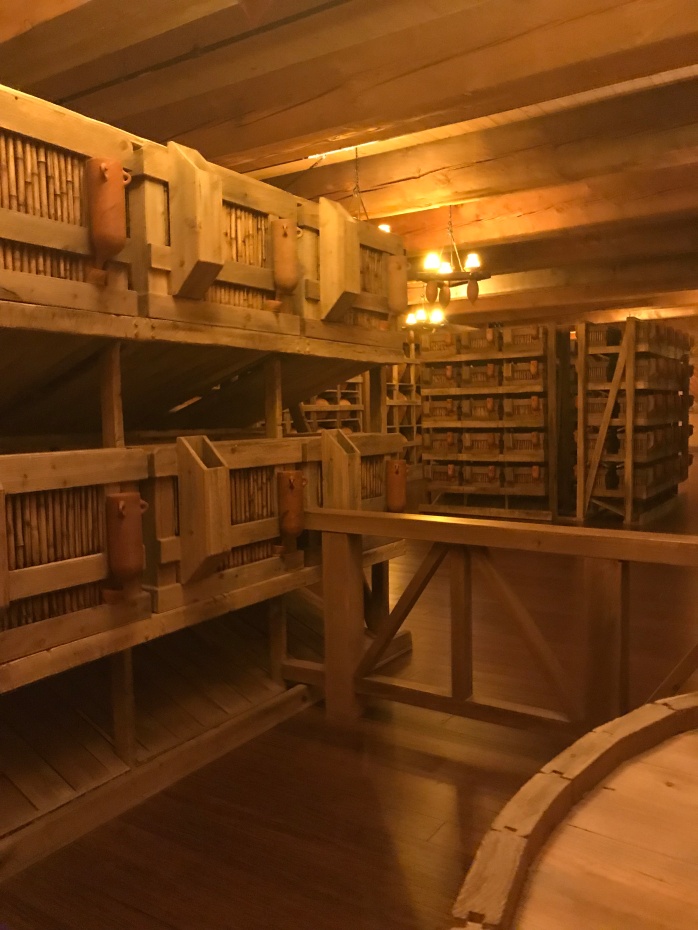 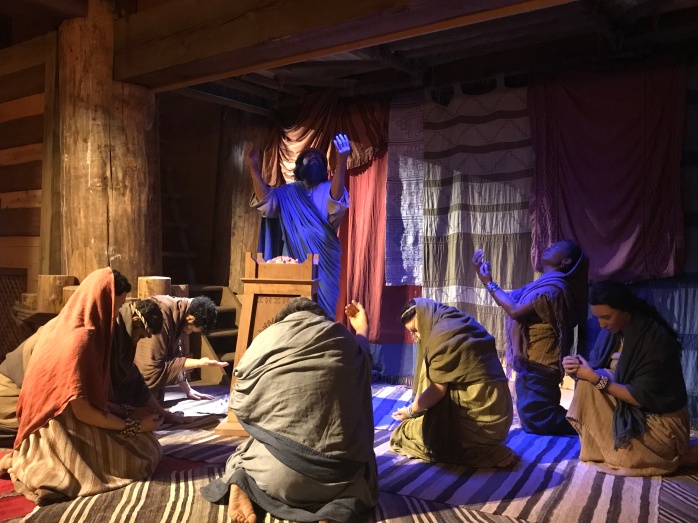 It was a great first full day in Kentucky! I got back to the hotel about 7:00, had dinner in the hotel restaurant, and settled in for the night……another great night’s sleep – I was exhausted!!!