One of our day trips during our stay in the Rapid City area in South Dakota was the historic town of Deadwood. Originally named Deadwood Gulch, because of the dead trees found in the gulch, Deadwood was known as a “boom town” in 1876 during the Black Hills gold rush era. Thanks to “Colorado” Charley Utter, businesses began to pop up along the street that ran through the gulch – mostly saloons and brothels popular with the men that came to town in hopes of striking it rich with gold found in the Black Hills. Deadwood became even more famous as the town where Wild Bill Hickok was murdered by Jack McCall on August 2, 1876. Wild Bill was buried in Mount Moriah Cemetery overlooking the town of Deadwood. Later, per her last wishes – “Bury me beside Wild Bill”, Calamity Jane was buried beside him. The story goes that Calamity Jane was in love with Wild Bill – her account was that she married him, but divorced him so he could marry Agnes Lake, but there is no record of that ever happening. Friends of Wild Bill recounted that he took her under his wing, like a father figure, and there was no romantic attraction – although, she followed him around like a puppy dog pining for him. It was noted that Wild Bill dearly loved his wife, Agnes, and only came to Deadwood at the invitation of his friend, “Colorado” Charley Utter, who enticed him with the money that could be made there.

Wild Bill’s murderer, Jack McCall, was an unlucky gambler who claimed Wild Bill had killed his brother. He shot him from behind in the back of the head while Wild Bill was playing cards – his final hand – black aces and eights – became known as the “Dead Man’s Hand”. McCall was tried by an informal jury of miners and acquitted because of his defense of avenging his brother’s murder. After much scrutiny, McCall was rearrested and retried – this was not considered double jeopardy because the original trial was not recognized as a legal proceedings. In the second trial, McCall was found guilty and sentenced to be hanged.

Here are some of my photos from Deadwood, SD and Mt. Moriah Cemetery: 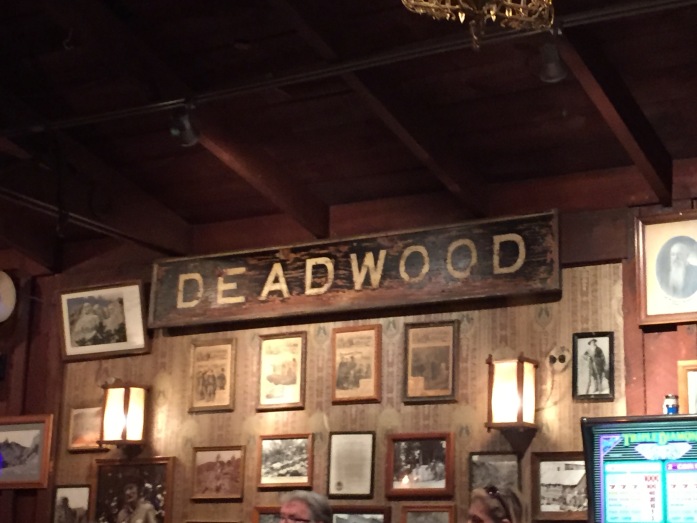 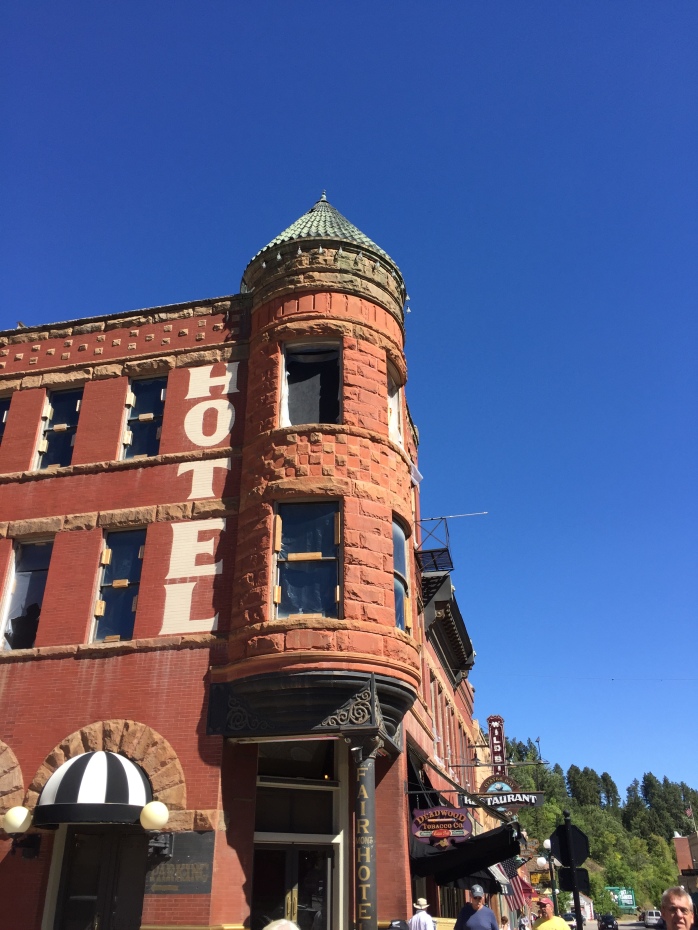 Kevin and me…..we just HAD to get this photo….even though, I told everyone NO photos of my from behind!!! LOL

I was too short to get up on the stool, so I ended up with a rather “high” butt and you can see my legs, but it still cracks me up!!! 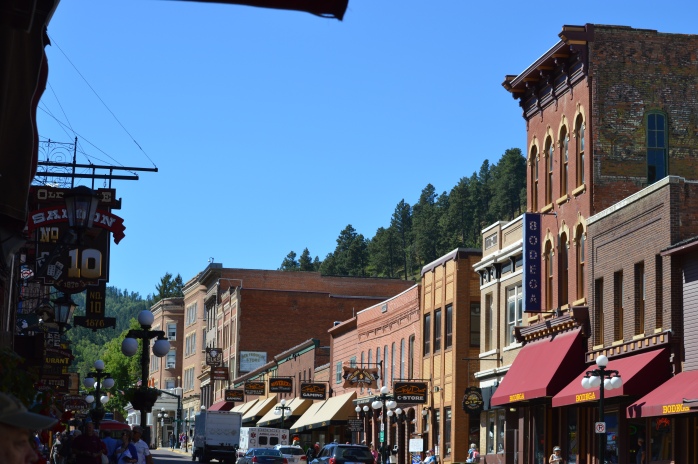 The town of Deadwood is in a gulch – whatever direction you look, you see the hills right behind the buildings!

The Steakhouse Saloon is located in the oldest building still in existence in Deadwood. 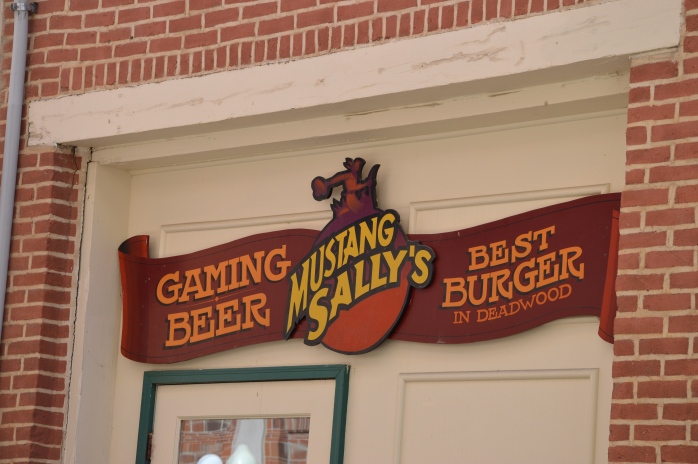 Saloon # 10….we stopped in here for lunch and discovered they do a reenactment of Wild Bill’s murder, so we stayed for the show! It is not the actual saloon he was murdered in, but since that particular building is no longer standing, they do it here!

The actual chair that Wild Bill was shot in

Kevin and Ace caught “Wild Bill” outside having a cigarette prior to his unfortunate demise! 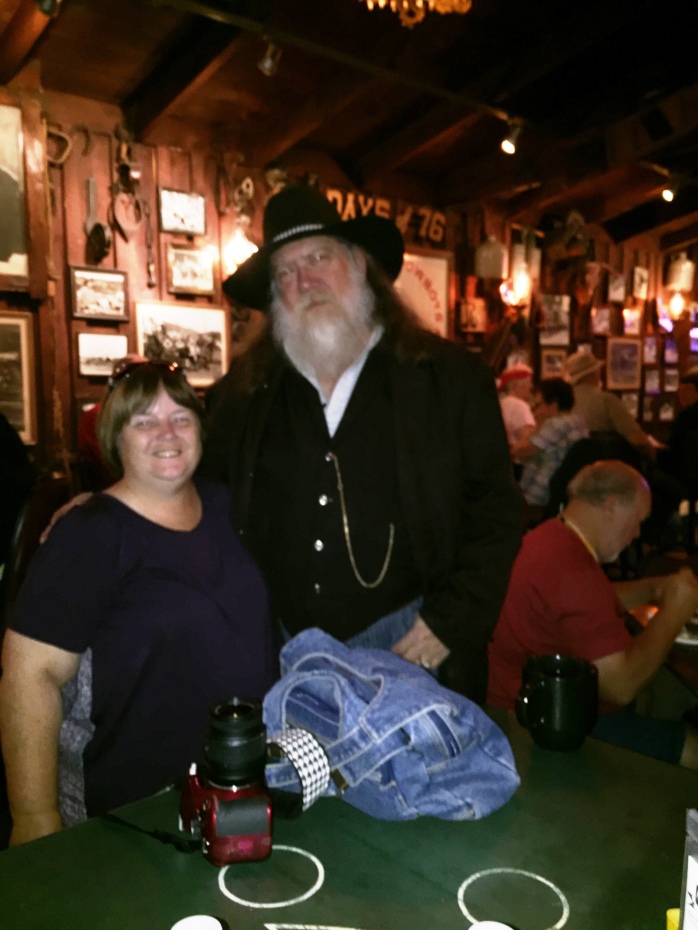 Me with “Colorado Charley Utter” 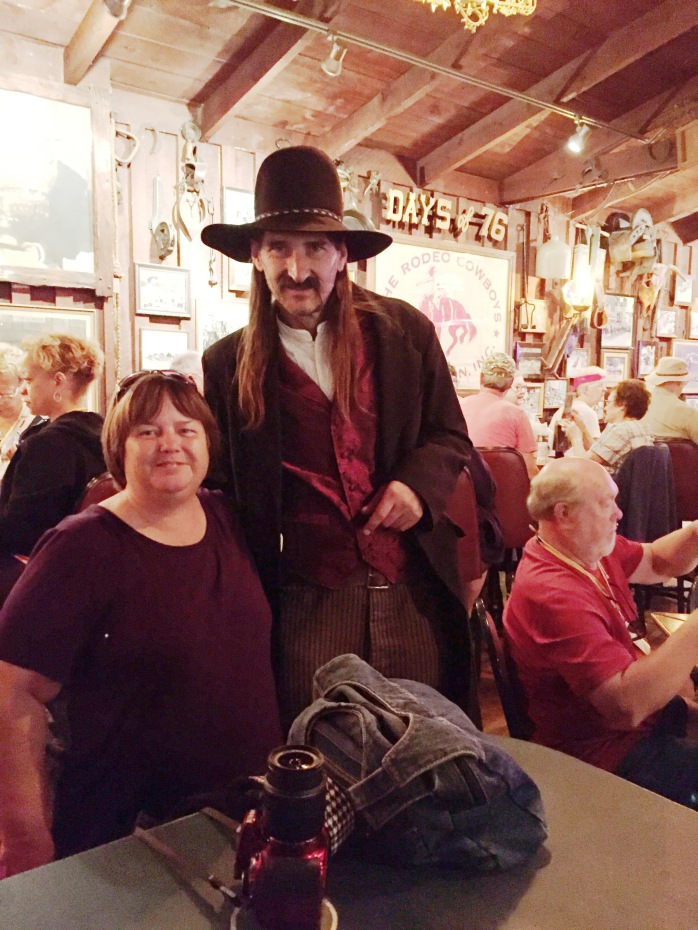 Me with “Wild Bill Hickok” before his demise 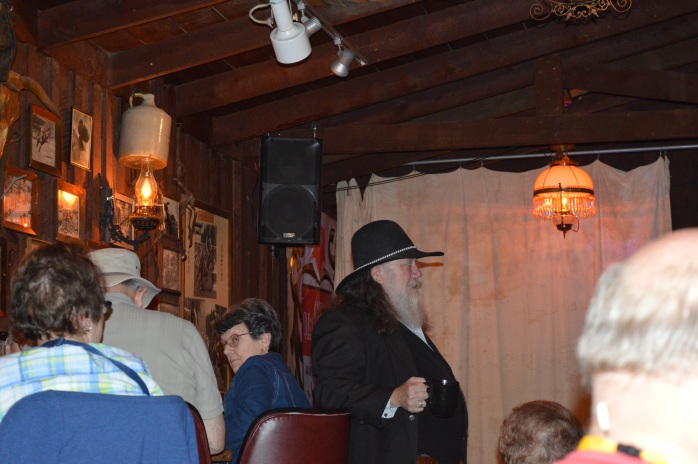 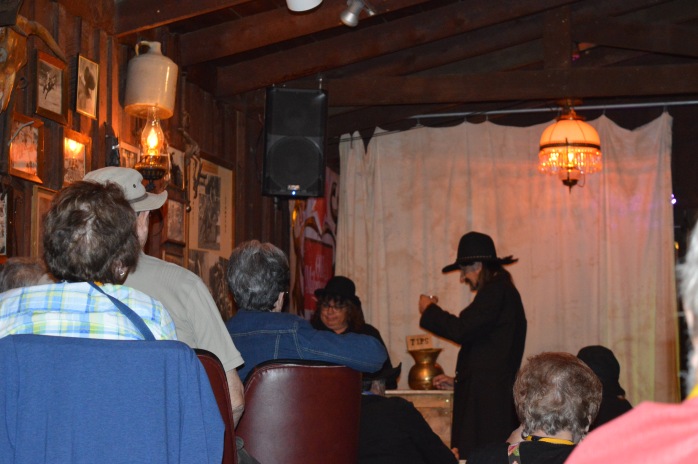 In this photo, Wild Bill has a drink before he sits down at the table

The story goes that Wild Bill NEVER sat with his back to a door. He asked one of the players multiple times to move so he could have a seat where he could see both the front and rear door of the saloon. The man refused, so, reluctantly, Wild Bill sat in a chair with his back to the read entrance to the saloon.

Jack McCall came in the front entrance and started to raise a ruckus. Wild Bill did not recognize him, so got up and pulled a gun on him. He decided he was harmless and let him go. McCall left the saloon……

….only to return through the back entrance door….

…..and shoot Wild Bill in the back of the head point blank! He was killed instantly – the bullet went through his skull and out his cheek to hit one of the other players in the wrist. 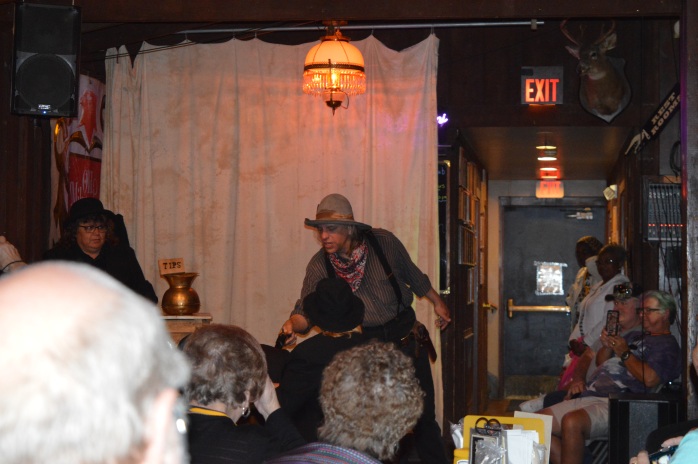 McCall made sure he was dead and ran out the back door! 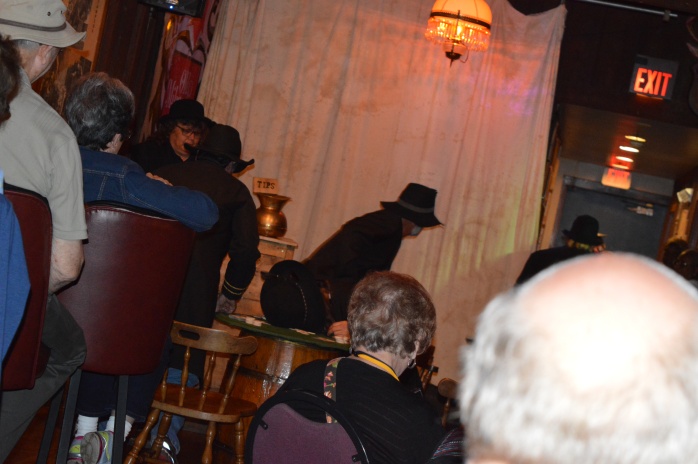 The other poker players got up and chased him.

While the bartender checked to see that he was dead and then grabbed up all the money on the table and ran off with it! 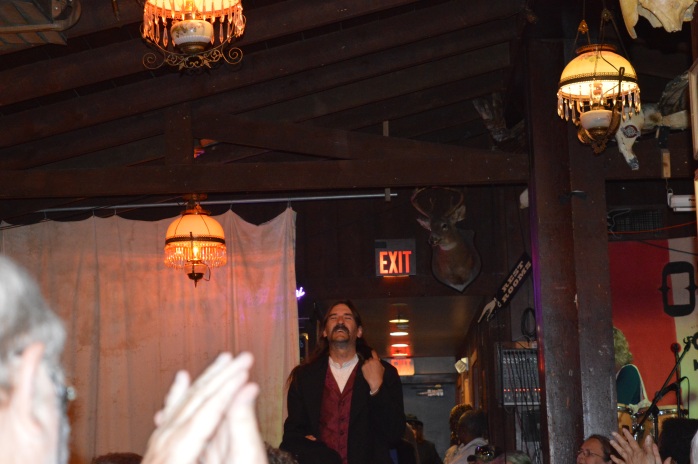 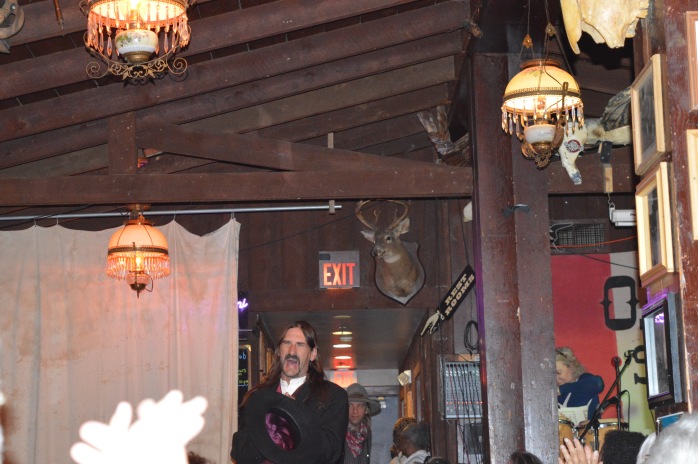 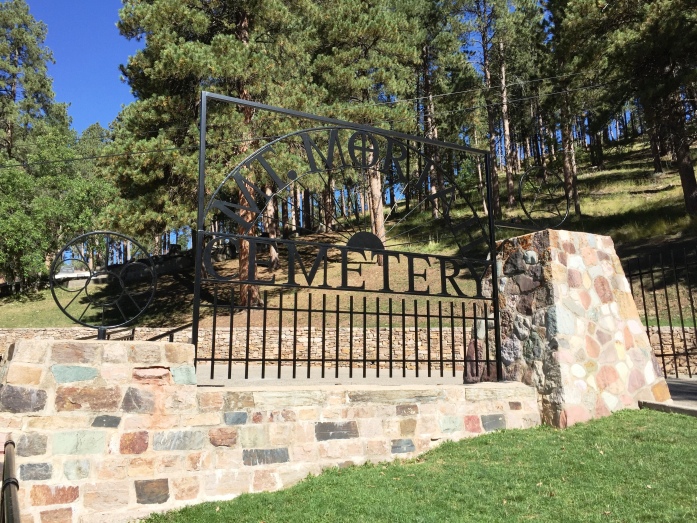 Mount Moriah Cemetery sits high above the town of Deadwood 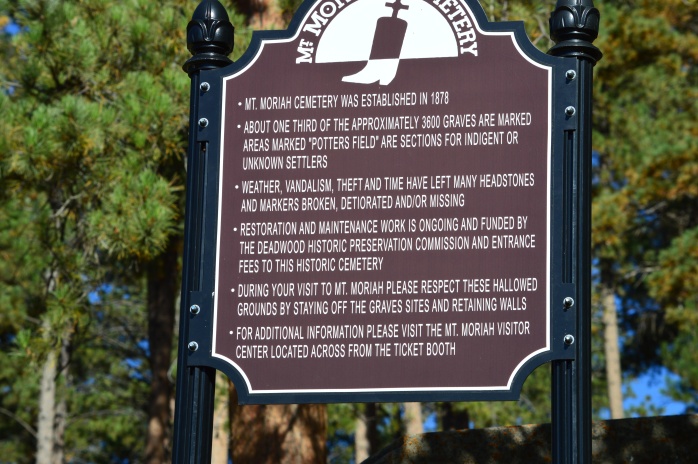 Most notably, Wild Bill Hickok and Calamity Jane are buried side by side (much, from all that is told, to the probably chagrin of Wild Bill and his wife, Agnes) 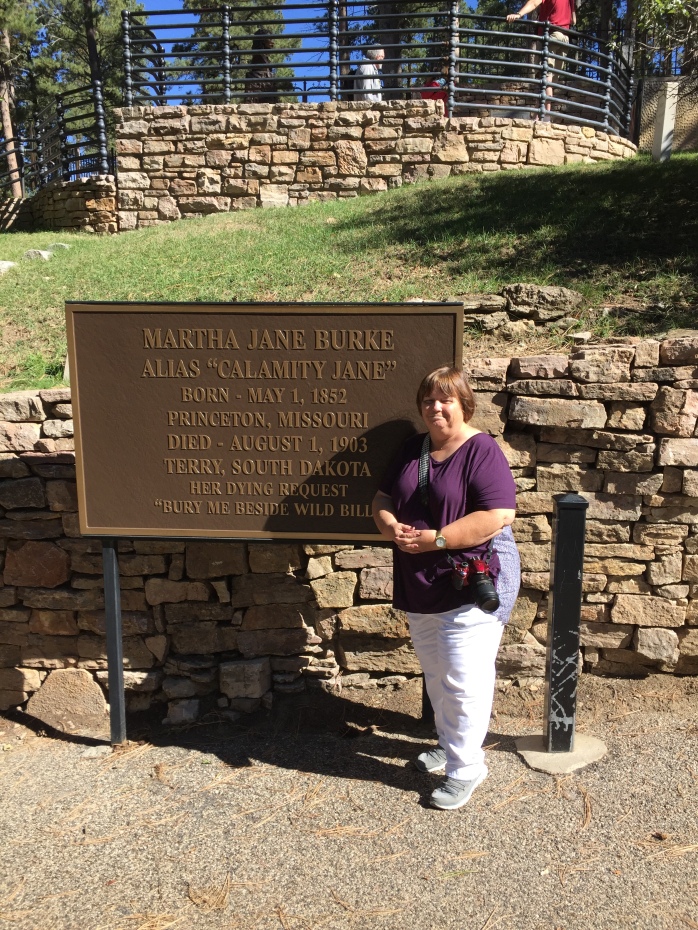 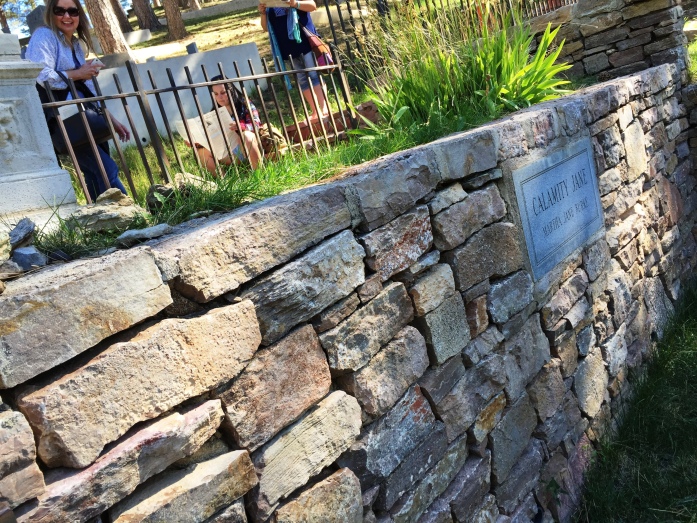 Lylace and her sister, Donna, having a peaceful conversation in the cemetery 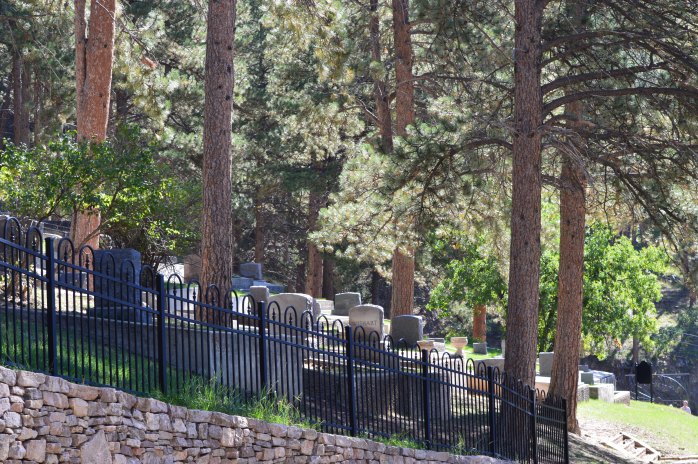 The highest point in the cemetery – an overlook of scenic Deadwood, SD

Kevin and me at the overlook 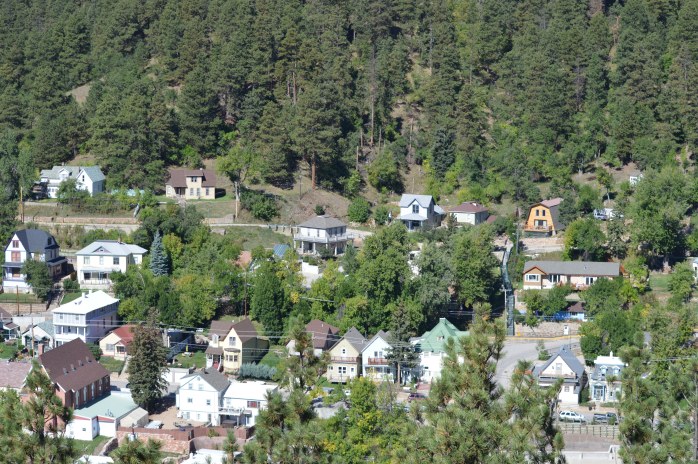