Happy New Year, everyone!!! Well, another year has come and gone and 2016 is here in all her glory! As is my usual practice, I thought I’d look back over the past year and reminisce a little.

I wrote 56 blog posts in 2015 (lots more than that, if you add in all the ones I wrote for the Albion High School Alumni Blog and our church blog). This past year, the focus of most of my blogs was photographs. I’ve always loved taking pictures and have taken some really nice ones, but in May, I broke down and bought myself a Nikon D3200 and spent a lot of time just driving around practicing with it and posting my photos. I took my little hobby to a whole new level and ended up capturing some really nice shots in the process!

Here is a summary of my year:

Adventures: A few of the most noteworthy adventures from 2015.

Bucket List Items: I also put a dent in my Bucket List – places or things I’ve identified as stuff I’d like to do when I can!

I used to read a lot when I was younger. Then, I started going to college late in life…..I completed three degrees back to back, going to school full time while working full time. Needless to say, I got real sick of reading for school and work real fast!!! By the time I finished with my Master’s program, I didn’t care if I never opened another book again! I did try off and on after that to read for pleasure, but I just couldn’t make myself stay interested! So, when I was considering my options for possibly retiring and moving back home, I bought myself a Kindle and loaded it up with books that looked interesting to me! I started reading a little while I was still working, but my goal was to spend a lot of time reading after I retired. I didn’t get into it as quickly as I had hoped – tons of other stuff to do! But, I got into reading a little more each year since and this past year I really hit the Kindle heavy! 🙂

Here are the books I read in 2015 that I rated with four or five stars on my Goodreads page (there were a few others that I rated a 3 or less, but will only list those I liked the best) – list is in no particular order:

Now, for a look ahead to 2016! Of course, I still have several items on my Bucket List and will likely go on more than a few impromptu adventures as they pop up! One thing that is already planned and booked is an Alaskan Cruise – CAN NOT WAIT – this has been on my Bucket List forever and is finally going to be checked off! I haven’t reviewed items that haven’t been checked off the list, yet, to see if there are things I might want to drop off, make a priority, or add to it. But, I will be doing that, soon!

Here are just a few of my favorite photos from 2015:

Bar Harbor, Maine – it was too foggy to tender ashore, but I got this photo from our stateroom!

An abandoned vegetable stand located across from Walmart – it just looked so cool the day I took this photo!

I snapped this while out walking one day and just really like it! It is the wall between First Niagara Bank and The Hazy Jade Gift Shop

My favorite photo – EVER! It was the best of the ones taken on an early foggy morning – taken in Mt Albion Cemetery! 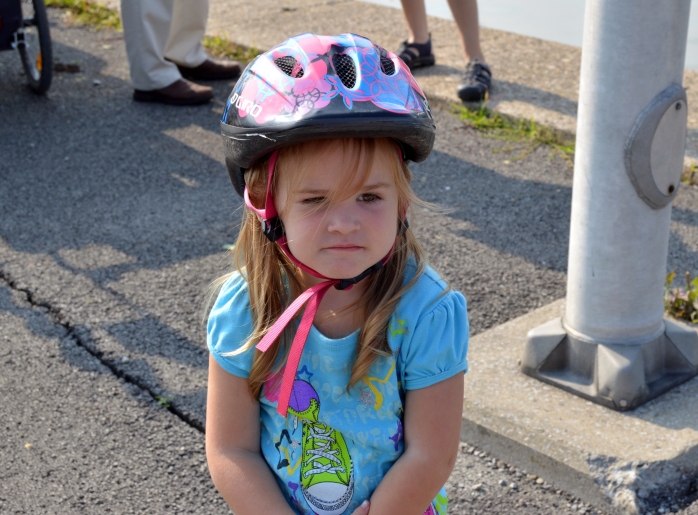 Another cyclist – the youngest of the group! She came up and tapped me on the leg and asked if I wanted to take a picture of her in her helmet – how could I not????

Love this one of Indian Falls – when I snapped it, I was sure it would be one I’d delete because I couldn’t get the falls to focus in because of the leaves in the foreground, but it turned out to be my favorite of the day!

This family in an older section of Mount Albion Cemetery wanted the family dog memorialized with them!

Santa Color Guard during the Santa Convention in April

That’s all for now…….hope your new year is full of adventures and laughter!!!

Category: Adventures, All About Me, Blogging, Books, Guilty Pleasures

← Merry Christmas to You and Yours!
My 2016 Adventure Bucket List →